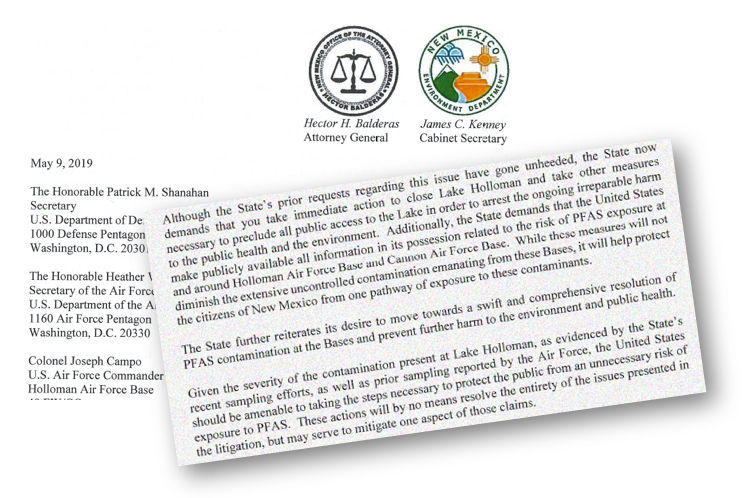 New Mexico officials find themselves stonewalled by the United States military over water contamination from two U.S. Air Force bases in the state.

Even in small amounts, exposure to these toxic, human-manufactured chemicals increases the risk of testicular, kidney and thyroid cancer and problems like ulcerative colitis and pregnancy-induced hypertension. PFAS include perfluorooctanoic acid (PFOA) and perfluorooctane sulfonate (PFOS).

In response to the groundwater contamination, New Mexico issued notices of violation against the military in late 2018 and again earlier this year. The state also filed a complaint in federal district court, asking a judge to compel the Air Force to act on, and fund, cleanup at the two bases.

But New Mexico is also a defendant in a separate case. After NMED issued a notice of violation against Cannon, the Air Force sued New Mexico, challenging the agency’s authority to compel PFAS cleanup under its state permit.

This month, state officials asked the Air Force to close public access to Lake Holloman, after tests revealed high levels of toxic chemicals in the water.

Balderas and Kenney asked officials to respond by May 16 regarding their “willingness to comply and your interest in further discussions related to this matter.” As of press time on May 23, the military had still not responded.

NM Political Report reached out to Air Force media contacts with a handful of questions, including whether Holloman Lake has been closed to the public.

Mark Kinkade, a spokesman for the Air Force Installation and Mission Support Center, did not answer that question. But he did reiterate past statements that the Air Force is “proud to be a leader” in the effort to “fully address health effects and concerns [from PFOS and PFOA] about food safety and agriculture commodities.”

“As a national issue, PFOS and PFOA contamination requires a whole-of-government response to fully address health effects and concerns about food safety and agriculture commodities,” Kinkade wrote in an email. He added that at all three bases in New Mexico—Cannon, Holloman and also Albuquerque’s Kirtland Air Force Base—the firefighting foam linked to the contamination has been replaced with a different formula that contains no PFOS and just trace amounts of PFOA.

Although swimming and fishing are both prohibited at Holloman Lake, which is fed by treated wastewater from Holloman Air Force Base, it is open to boaters, including those who might let their dogs swim in the water. The area is also visited by campers seeking close access to White Sands National Monument or who enjoy watching planes from the base.

According to the state’s letter, which was also sent to then-Air Force Secretary, and former New Mexico congresswoman, Heather Wilson, recent sampling of the lake’s water revealed “extremely high” levels of PFAS. Specifically, PFOA was found at levels as high as 5,900 nanograms per liter and PFOS, 1,600 nanograms per liter. The PFOA levels are more than 80 times the U.S. Environmental Protection Agency’s health advisory level, and the PFOS levels, more than 20 times higher.

Further, according to the state’s letter: “The continued presence of PFAS associated with the Bases, including at such high levels in Lake Holloman, poses an ongoing severe threat to members of the public who may be exposed to these toxic chemicals and to the environment, including various wildlife that use the Lake habitat as a source of food and shelter.”

The New Mexico Department of Health (DOH) warns people to not ingest water or foam from the lake, swim in the lake or touch the water.

“The lake itself is treated effluent,” said Heidi Krapfl, deputy division director of programs for the Epidemiology and Response Division at DOH, adding that swimming is already prohibited there. But if people or their pets touch the water, they should wash with soap and clean water, especially before preparing or eating food.

She added that skin contact with PFAS isn’t their biggest concern. Rather, ingesting the water, especially over time, is the problem.

Whereas NMED is responsible for regulating public drinking water systems, private drinking wells are not regulated. DOH has tested some private wells near Cannon to help residents understand what is—or isn’t—in their water.

“If you have it in the water, and you’ve been drinking it for however many years, it has accumulated,” she said. “The main thing is, we want people to know for sure what’s in [their] water.”

Moving up the food chain

PFAS’s move through the groundwater, and they’re persistent, which means they stick around for a long time. They also move up the food chain, accumulating more and more within each species.

Scientists have found PFOS in fish-eating birds, even those in remote marine locations. And in Michigan—another state grappling with PFAS contamination from military bases—scientists found PFOS in the muscle of deer living near the former Wurtsmith Air Force Base. That state issued a “do not eat” advisory for deer harvested within that area.

Holloman Lake is also considered an important area for birds, including migrating ducks. According to the Audubon Society’s website, the lake is the most important area in the Tularosa Basin for shorebirds like Wilson’s phalarope and snowy plovers.

“The bottom line is that you’ve got a wetland complex that provides wintering and migratory bird habitat to thousands of shorebirds and waterfowl each year that is potentially contaminated by a bioaccumulating toxic chemical, that’s not a good thing,” said Jonathan Hayes, executive director of Audubon New Mexico. “Holloman Lakes is also one of a dozen or so sites in the state that are frequented by snowy plover, a species in drastic decline over much of its range and one that is likely to ingest toxic chemicals as they feed on aquatic invertebrates which make up the bulk of their diet.”

In addition to birdwatching, waterfowl hunting is allowed within certain areas at Holloman Lakes. Although the New Mexico Department of Fish and Game issues hunting permits and sets hunting season rules, the responsibility for closing the area to hunting would lie with Air Force officials.

Meanwhile, Balderas and Kenney are still waiting to hear back from the Air Force.

“We have not received a response to the letter sent by NMED and the Office of the Attorney General on May 9,” said NMED’s public information officer, Maddy Hayden. “We are also unaware of any actions the Air Force has taken in the interim to protect the public from exposure to PFAS at Lake Holloman.”

She added that the lack of response and action “serves as yet another example of the Air Force’s unwillingness to take responsibility for the serious damage it has caused to New Mexico’s environment.” And, she said, the state “will continue to use whatever means necessary to ensure this contamination is addressed and remediated by the Air Force.”

Balderas said his office’s priority is the “health and safety of New Mexican families,” and he added: “We look forward to hearing from the Air Force regarding how they plan to repair the damage they have caused.”

Update: On Tuesday, May 28, we received an email response from the 49th Wing Public Affairs. According to that email, there are no changes to access at the lake, which is referred to as “Holloman Evaporation Pond.”

“At this time, there are no changes to current restrictions, which is that the body of water is not associated with boating, fishing, or any other activities normally known as recreational,” read the email. “For additional precaution, there are also signs posted near the pond that state swimming and drinking the water are prohibited and all activities are at the user’s own risk.”