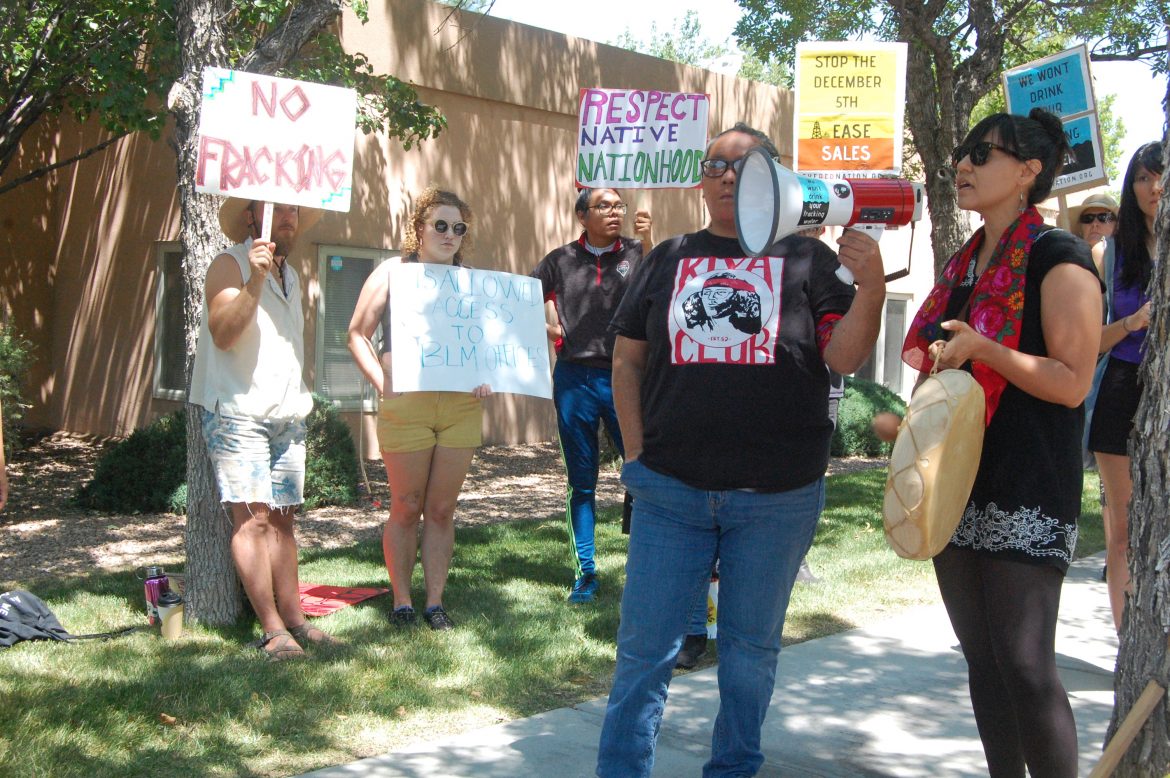 With over 40,000 oil and gas wells spread throughout the San Juan Basin, many Navajo communities are on the frontlines of New Mexico’s oil and gas boom.

Antonio, 25, has seen the impacts in her home Torreon, a small Navajo community surrounded by oil and gas development in northwest New Mexico.

“Our aquifer right now is under threat from oil and gas industries,” she says. And she’s concerned about a rise in cancer diagnoses in her family.

Environmental groups highlight the critical impacts of the fracking process, which uses large quantities of water as well as toxic chemicals to fracture underlying rock and enable access to oil and natural gas. Studies by the Environmental Protection Agency and other scientists have documented air and water pollution as a result of fracking.

Antonio is a lead organizer with the coalition the Red Nation, whose mission calls for “the liberation of Native peoples from capitalism and colonialism” and to “center Native political agendas and struggles through direct action, advocacy, mobilization, and education.” The group is calling for a Red Deal, a new movement with a broad platform that includes treaty rights, land restoration, restoration of watersheds and waterways, and a moratorium on oil and gas extraction.

Antonio says her community isn’t being consulted about nearby oil and gas development by the U.S. Bureau of Land Management, and that the long-term health effects of fracking haven’t been sufficiently evaluated by government agencies.

Last week she joined other activists from the Red Nation to protest the latest round of oil and gas leases auctioned by the BLM. Barred from accessing the BLM’s offices in Albuquerque, a couple dozen activists protested on a street nearby, chanting, “You can’t drink oil, keep it in the soil!” and “We won’t drink your fracking water!”

In fact, several tribal entities did file formal protests against the June 20th sales, including the All Pueblo Council of Governors and the Ojo Encino and Torreon/Starlake Chapter Governments of the Navajo Nation. They cited concerns about increasing carbon emissions as well as pollutants from oil and gas development. In its protest, the All Pueblo Council said the BLM “failed to provide adequate and meaningful tribal consultation” and violated the National Historic Preservation Act as well as the National Environmental Policy Act.

Melanie Yazzie is one of the founders of the Red Nation. She says while the BLM protest addressed fracking, it’s fundamentally about clean water.

The Red Deal is inspired by Congress’ Green New Deal spearheaded by U.S. Rep. Alexandria Ocasio-Cortez, D-New York, Yazzie explains, and is not meant to compete with it.

“We’re trying to develop a movement that is confronting climate change head on,” she says. The Red Deal is not just fighting resource extraction, Yazzie emphasizes, but “reclaiming a relationship with our ancestral land, and treating the land and the water as a relative.”

Melissa Tso is an activist and social worker originally from Chinle, Arizona, who notes that when the Red Nation hosts educational events “people get inspired and want to take action right away,” and calls the BLM protest a way to “propel people into an action to save the earth.”

At a workshop to introduce the Red Deal held in Albuquerque near the University of New Mexico the day before the protest, activist Antonio addressed a full room of 75 Native and non-Native participants, ranging from students and educators to longtime community activists.

“We’ve been in this fight for 500 years and we’ve made multiple deals,” she said, “but this is the one where we actually get shit done.” Estes, another organizer, emphasized that “the best forms of environmental policy and protection comes not from the top down but from the bottom up.”

After a prayer and a hearty meal of bison stew, participants broke into groups to work on drafting solutions. Estes called for creating “clusters of action,” that he said could translate to different contexts, including governments at the city, state, or tribal level.

Congresswoman Deb Haaland, a Democrat from Albuquerque, sent a representative to the workshop. Haaland says Red Nation activists “are absolutely right, for far too long the US government has not lived up to its obligations to Indian tribes, and this is a new era.” Haaland, a member of the Laguna Pueblo, is a co-sponsor of the Green New Deal and says she plans to make sure tribes are included as it is developed.

Haaland says she’s also fighting for permanent protection for Chaco Canyon, a sacred site for many tribes and a UNESCO World Heritage Site. In recent months the greater Chaco area received new protections from oil and gas development after both the New Mexico State Land Office and the Interior Department declared short-term moratoriums on drilling. Yet lands outside the 10 mile buffer zone remain unprotected. In May, a federal court ruled certain past leases were improperly approved by BLM without considering environmental impacts, yet the agency continues to approve new leases.

Haaland says she’s “disheartened” the latest leases were approved by the BLM. “The last thing we need are more fossil fuel projects on public land,” she says, noting that 25 percent of all US carbon emissions comes from fossil fuel production on public lands, according to a recent USGS study. “Unfortunately this administration is hellbent on pleasing the gas and oil industry at every single opportunity,” she adds.

Red Nation activist Yazzie says given the circumstances, their coalition has no choice but to take action. “Fighting against fracking and all types of resource extraction fundamentally is about trying to allow us to have a livable future on the planet,” she says. “We really don’t have much time.”