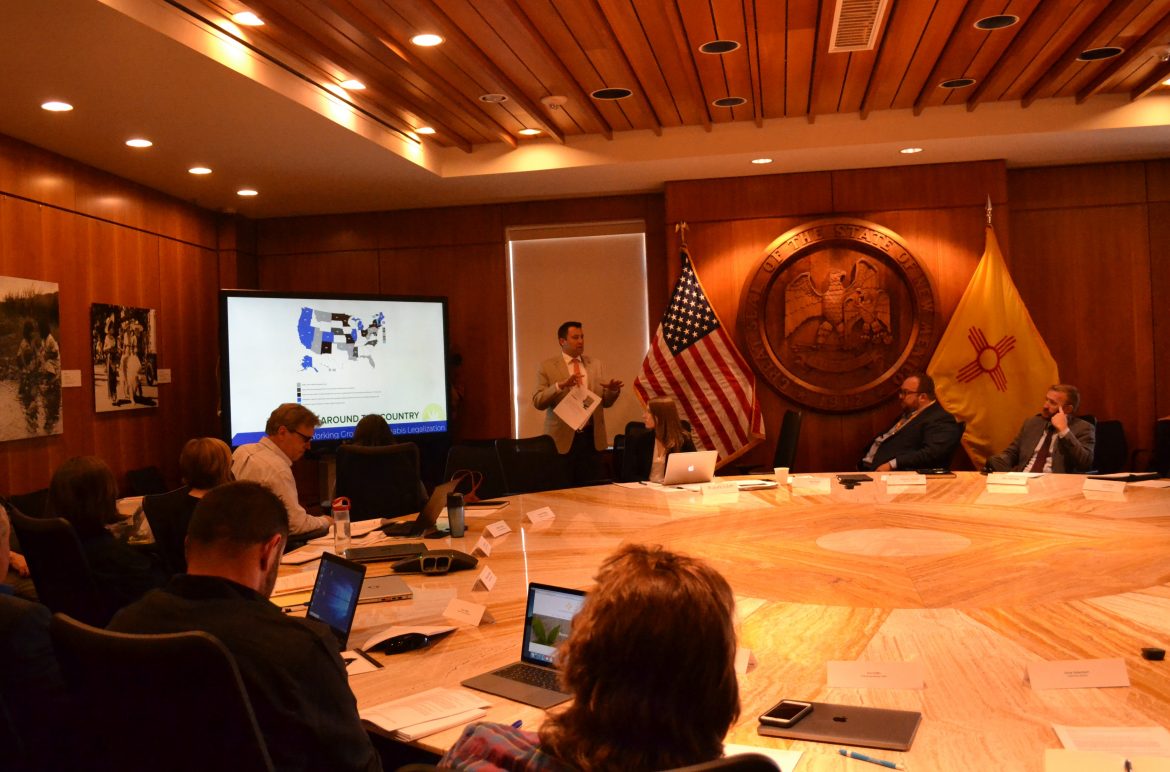 In its inaugural meeting, a group tasked by New Mexico’s governor to come up with ideas to safely and efficiently legalize recreational use cannabis in the state discussed the process for which it will follow in the next several months.

The Working Group on Cannabis Legalization for New Mexico consists of about 20 people with varying backgrounds, including medical cannabis producers, medical cannabis patients and state departments. Gov. Michelle Lujan Grisham picked the members of the group.

Lujan Grisham’s senior policy advisor Dominic Gabello told members he is confident the group will be able to address the many concerns related to legalizing cannabis in New Mexico.

“We’ve put this together and I think we’ve got a good plan moving forward to discuss this and really figure out, how do we find the right path forward for New Mexico,” Gabello said.

Some medical cannabis patients and producers previously raised their concerns about adequate patient representation in the group. Before Wednesday’s meeting, there was no patients in the group, but patient advocate Heath Grider was ultimately added.

“I believe that everyone is doing their best to include us,” Grider said just after Wednesday’s meeting.

But, he said, the group can still use more voices, particularly from patients and businesses who might be impacted by legalization.

The group’s chair, Albuquerque City Councilor Pat Davis, told NM Political Report there will be more opportunities in the next eight planned meetings to include community stakeholders from across the state, including Native American tribal members and leaders and residents in rural areas.

“All those meetings are public and they can add comments ahead of time online,” Davis said.

Davis also said the group’s website will allow members of the public to see what each member thinks about a specific issue related to legalization.

“You’ll see who dissented and what the vote was,” Davis said.

And even though the group’s website is not an official state site, Davis said the whole process will be transparent and encouraged members to be aware of that .

“Assume everything you write down is public record,” Davis told the group before the meeting.

Sen. Cliff Pirtle, R-Roswell, who co-sponsored a bill last legislative session to legalize cannabis and establish state-run dispensaries, is also part of the group. He said he would like to see the group address the concerns of the public but also those of his colleagues who are hesitant or resistant about legalization.

“I know just within the senate it’s going to take a lot of work to come up with something that is going to mitigate all the concerns,” Pirtle said. “We need to do the best we can.”

Pirtle also said it is only a matter of time before New Mexico faces legal cannabis and that even the naysayers get to have a part in crafting legislation.

“This is something that is inevitable and we need to have a part in the framework in how it’s done to ensure our concerns are met,” Pirtle said.

Davis said the group will use the website to collaborate and weigh in on specific issues outside of physical meetings. Those issues include, how legal cannabis might be taxed and regulated, how to ensure there are equal opportunities to get into the cannabis industry and how to make sure the state’s Medical Cannabis Program doesn’t suffer.

The next meeting is scheduled for August 14 and will focus on the medical program and licensing.