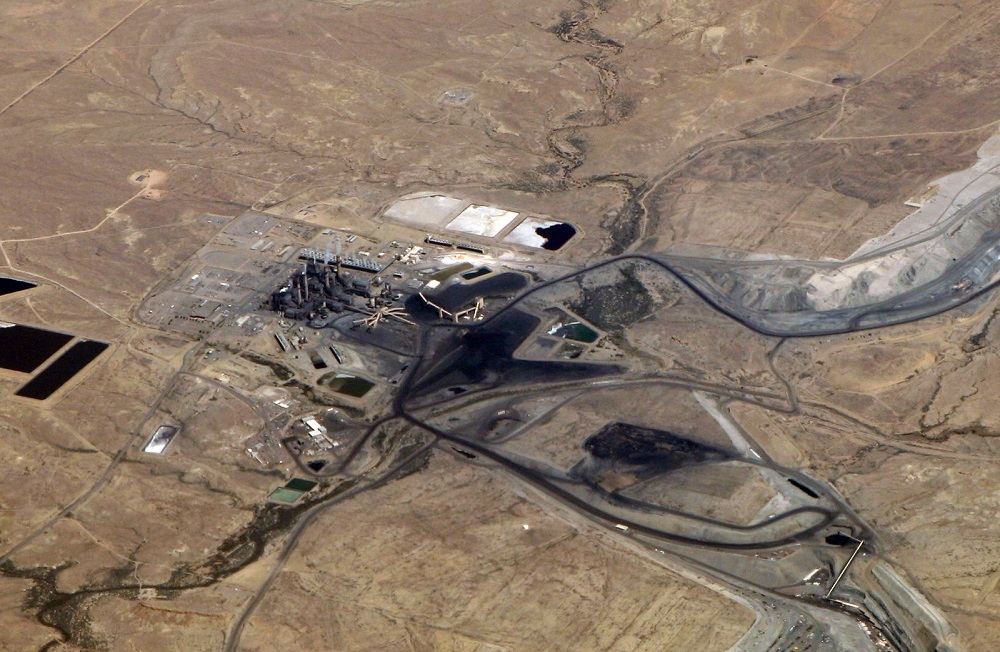 PNM, the majority stakeholder in the San Juan plant, plans to shutter the facility by 2022 as part of the utility’s wider goal of ending all coal-fired power generation in its portfolio by 2031. That strategy aligns with Governor Michelle Lujan Grisham’s Energy Transition Act (ETA) law, which would see the state generate 50 percent of its electricity from renewable energy sources by 2030.

The City of Farmington announced in February that it reached an agreement with Enchant Energy to keep the plant open. The company is an unknown firm in the energy sector and a newcomer to the state. Enchant Energy is seeking to acquire a 95 percent stake in the plant to take over operations after 2022. It has proposed retrofitting the station with carbon capture and sequestration technology in what would be the largest project of its kind in the country. Carbon capture systems capture, utilize or store carbon dioxide from large industrial sources to reduce carbon emissions, though the technology.

The news came as a surprise to PNM, who claimed the city had reached the agreement with Enchanted Energy without informing PNM.

“There’s a lot of flim-flam in it, I think,” Cates said in an interview.

“One thing we’re fairly confident about is that they have no experience in electricity generation,” Cates said.

The IEEFA report outlines several criticisms of Enchant Energy’s proposal and identifies key market barriers to the project’s success. Those barriers include the declining price and increasing market share of renewables, which has eaten away at the competitiveness of coal generation; and advancements in natural gas technology in providing low-cost electricity.

Enchant Energy, which did not respond to multiple requests for comment on this story, has proposed transporting and selling carbon dioxide to oil producers in the Permian Basin for operations such as enhanced oil recovery, a process that uses carbon dioxide to extract any remaining oil from old wells.

Selch, who did not respond to a request for comment, said the location of the San Juan power plant and its proximity to the Cortez Pipeline made it an ideal location for carbon capture, in an interview with Farmington Daily Times.

“It’s not clear if it’s economically viable to ship carbon dioxide that far,” Cates said. “Is there a market there that can support these shipment costs? The Cortez pipeline would be the conduit, is there capacity on that pipeline? And the other big stumbling block is that [the San Juan Generating Station] is 20 miles from the pipeline. You’d have to build a 20-mile pipeline, and that raises all sorts of economic feasibility issues—to say nothing of the regulatory hurdles.”

Under the company’s proposal, the City of Farmington would contribute $10,000 to the project “in the form of in-kind personnel support,” according to a letter issued by the Farmington Mayor’s office. The city would also maintain its 5 percent stake in the power plant.

Another red flag in Enchant Energy’s proposal, according to IEEFA, is that it doesn’t address the long-term liability of owning a coal generation plant. Cates said that leaves Farmington vulnerable to future costs associated with the project.

Overall, the authors of the report conclude Enchant Energy’s business model is “unworkable.”

“It worries us a little bit, when you have a small town like Farmington being pitched by some slick people from Wall Street who we don’t think have a viable proposition, and that are potentially leaving the town on the hook for liabilities that are inevitable in a project like this in terms of reclamation, rehabilitation, clean up and so on,” Cates said. “We’re just saying be careful here.”

In a statement to NM Political Report, a spokesperson said the City of Farmington is “working on an agreement with Enchant Energy that will allow the project to advance while also protecting the City’s multiple interests and responsibilities.”

“This agreement will protect the City by limiting financial liability, providing predictable electricity costs which are among the lowest in the State, and protecting the City’s operational, financial and environmental interests. Significantly, our agreement will ensure that the City is only responsible for the remediation expenses that are already a part of its current operating agreements, which are approximately 5% of the plant’s total.”

Pointing to a “pre-feasibility study” released last week that was commissioned by Enchant Energy, and conducted by Chicago-based engineering firm Sargent & Lundy, the city spokesperson said “the conclusions made in the study are suggesting high potential for operational and economic success for the reconfigured [San Juan Generating Station]. This is a positive and important milestone towards implementing a project that works for the State of New Mexico, the City of Farmington, the hundreds of workers at the power plant and coal mine and for Enchant Energy.”

Enchant Energy and the City of Farmington have applied for $5.8 million grant from the U.S. Department of Energy to study the feasibility of carbon capture at the site.