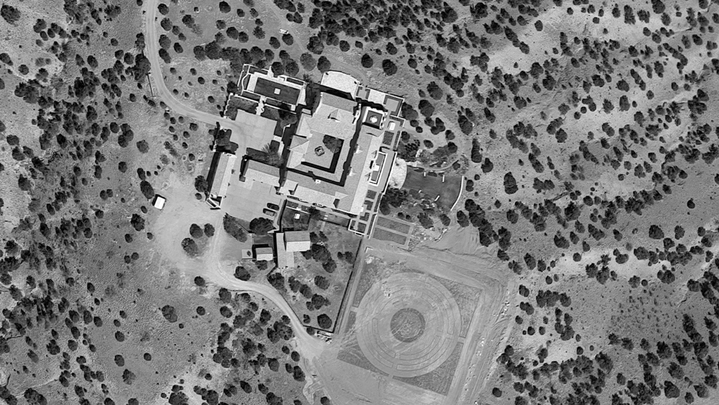 Aerial image of the house and helicopter pad on Zorro Ranch.

Investigators with the New Mexico Attorney General’s Office plan to turn over any information they gather about alleged sex crimes committed here by Jeffrey Epstein to federal prosecutors “as soon as possible,” a spokesman for the AG says.

That means, for now, Attorney General Hector Balderas’ team is working as fact-gatherer for the US Attorney’s Office in the Southern District of New York, where Epstein pleaded not guilty last week to charges of sex trafficking of minors and sex trafficking conspiracy, says Matt Baca, senior counsel for Balderas’ office.

“At this point it’s primarily been communication between the two offices,” Baca tells Santa Fe Reporter and New Mexico In Depth on Wednesday. “As soon as we’re done, or at a place where we feel like we have significant investigative materials to turn over to them, we plan to do that.”

He says the AG isn’t working on an indictment here, but noted “nothing is off the table in terms of possible state-level charges.”

Baca confirms that “two or more” women have told prosecutors in New Mexico they are victims of Epstein, who owns the massive Zorro Ranch in southern Santa Fe County. The AG’s office began investigating allegations against Epstein in “February or March,” he says, independent from the SDNY investigation.

Epstein, 66, pleaded guilty in Florida to federal sex trafficking charges in 2008. He has not been charged or convicted of any crimes in New Mexico. However, multiple women have alleged that they were sexually victimized as minors at Epstein’s ranch here, including the women who came forward this year and are working with Balderas’ investigators.

Meanwhile, state Land Commissioner Stephanie Garcia Richard on Tuesday handed more than 400 pages of records to Balderas’ office documenting current and expired state trust land leases with Cypress, Inc., a Virgin Islands-based company that her records show Epstein still owns. He transferred the deed for the ranch to that company in 2013. It comprises about 7,600 acres and completely surrounds a parcel of state trust land.

The two agricultural leases on that land total more than 1,200 acres; two active livestock grazing lease contracts date to 1997 and 1999 and were renewed in 2016. An expired livestock contract was signed in 1993.

Garcia Richard says in a news release she is “reviewing all leases with Cypress thoroughly for possible lease violations.”

“The leases that we sign are legally binding contracts but we are pursuing every legal avenue to terminate Epstein’s leases with the State Land Office as soon as possible,” the Land Commissioner says.

Baca confirms that Balderas’ office received the documents and is reviewing them.

“We will definitely incorporate [the documents] into our review and take into account how the land leases might impact anything that we’re looking at or if there’s any other action that might be taken out of what they provided,” he says, adding that it’s too early to say how the leases might impact a state or federal criminal investigation into Epstein.

The team at Balderas’ office reviewing allegations against the one-time influential and politically connected financier works out of the Special Investigations Division, Baca says. Investigators in that division have worked on recent high-profile cases that resulted in successful prosecutions against former state senator Phil Griego and former secretary of state Dianna Duran.

Baca says he doesn’t know whether AG’s investigators have interviewed Epstein or spoken to anyone with his legal team.

“Right now we are in somewhat of an early investigative stage,” he says.

Anyone with information about Epstein or possibly illegal activities at Zorro Ranch is asked to call the main number at the Attorney General’s Office — which has victim advocates standing by — at (505) 490-4060.

This report was produced in collaboration with the Santa Fe Reporter.