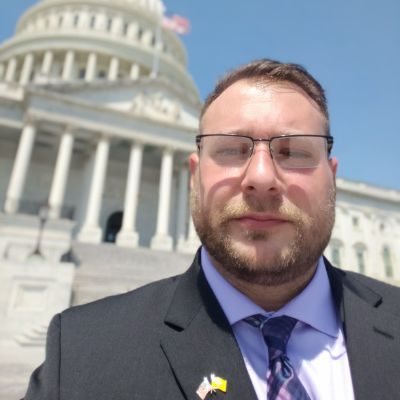 “I know others have announced on the Republican ticket in CD3, and I’m certain more will. It’s important that we show unity within the Republican party and have strong candidates in each race to offer voters an alternative to the reckless ultra-progressive agendas,” Kokinadis said in a statement.

Kokinadis is touting his ties to President Donald Trump and says he met with Trump’s deputy political director in May, while he was running for the 3rd Congressional District seat. Kokinadis was previously harshly critical of Trump.

During the 2018 election, he founded New Mexico Democrats for Democracy, a group that advocated against Michelle Lujan Grisham, the Democrat who ultimately won the election for governor.

In the most recent fundraising period, Kokinadis raised $8,200—of which $7,901 came in the form of loans from himself to his campaign.

And while the 3rd Congressional District has historically been a Democratic seat, the 1st Congressional district race may not be much easier for a Republican.

While the Albuquerque-area district was once a Republican mainstay, it has in recent years has been a safe seat for Democrats.

Republicans held the seat, many times easily, from its inception. But in the 2000s, the district began to shift more towards Democrats, and then-incumbent Republican Heather Wilson narrowly won the 2006 race over then-Secretary of State Patricia Mardid by fewer than 1,000 votes.

In 2008, when Wilson left the seat to run for Senate, Democrat Martin Heinrich won with nearly 56 percent of the vote against Republican Darren White. In 2010, a Republican wave election, Heinrich narrowly retained his seat over Republcian Jon Barela by a 51.8 percent to 48.2 percent vote.

Since then, Democrats have won the seat by over 15 percent of the vote in every election.