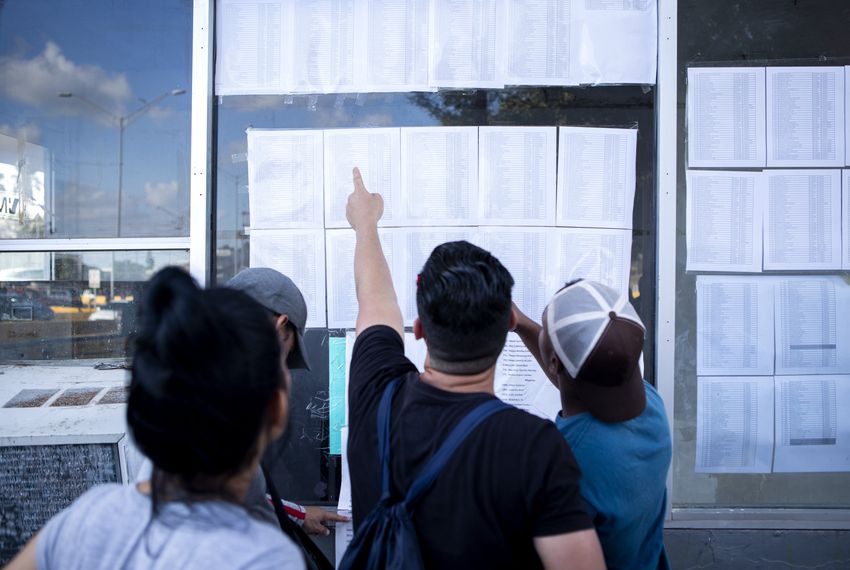 Cuban migrants look at a list of asylum seekers near the Gateway International Bridge in Matamoros, Tamaulipas.

““All we want is for them to listen to us”: In Mexico, Trump’s latest asylum policy stirs anger, fear and confusion” was first published by The Texas Tribune, a nonprofit, nonpartisan media organization that informs Texans — and engages with them — about public policy, politics, government and statewide issues.

CIUDAD JUAREZ, MEXICO — Last Wednesday in this border city, Carmen, a Cuban woman who’s been stuck here since May, fought to contain her rage and desperation.

About the same time — and more than 900 miles away in the Mexican city of Matamoros — Jorge Luis Gutierrez, also from Cuba, was reeling from what he said was a trap laid for asylum seekers by the Mexican and American governments.

“They’re trying to deceive us,” he said just steps away from the international bridge between the U.S. and Mexico.

On Monday, the Trump administration announced a new policy that would disqualify most asylum seekers from receiving protections in the United States if they didn’t first apply for asylum in another country.

Now, tens of thousands of migrants who have been waiting for months in Mexican border cities are struggling to understand what the policy means for them, even though they’ve followed the rules and have waited to enter the United States legally at a port of entry instead of unlawfully crossing the Rio Grande.

On Tuesday, the American Civil Liberties Union, the Southern Poverty Law Center and the Center for Constitutional Rights in the Northern District of California filed a lawsuit to halt the new policy. But for the migrants in Mexico, that provided little solace.

“Maybe I should have tried to enter illegally,” Carmen said, her voice rising. “Maybe I would have been with my son [in Florida] already.”

Carmen and Gutierrez have both been waiting to apply for asylum in Mexico for about two months after the United States implemented its “metering” policy that limits the number of immigrants that are allowed to apply on a given day. Several of the Cubans waiting in Matamoros said there were 2,500 on the list there. But no one has been taken to cross the bridge in two days, Jorge Luis claimed.

In Ciudad Juárez, there are about 5,000 people on the list, although it’s unclear how many have given up and returned to their home countries, said Enrique Valenzula, the director of Ciudad Juárez’s Centro de Atención a Migrantes, a migrant transition facility operated by the Chihuahua state government. The number could be closer to 3,500.

On Tuesday afternoon, only five migrants were allowed to cross, and not one number was called Wednesday morning. On other days, dozens have been allowed to enter. The latest slowdown had Carmen and others on edge.

“They haven’t given us any information,” she said.

Valenzuela said the slowdown isn’t unheard of but conceded it’s adding to an already stressful situation.

“They’re worried, above all, because they’ve waited for three months. They’ve been waiting for the moment they’re called and are able to cross in an orderly fashion,” he said. “And now, these people are saying they’ve waited and there are people that crossed another way before this [policy] and they’re already living in the United States.”

Some of the migrants waiting in Mexico have suddenly opted to cross the Rio Grande instead of waiting for their numbers to be called.

Gutierrez said about a dozen took that chance Wednesday, including “kids and pregnant women” he said. The group consisted of Cubans, Venezuelans and Hondurans who swam while others went on inner tubes as the women held on, he said.

Since last month, however, the Mexican military and federal police have been dispatched to the northern border to prevent people from crossing the river. One of the soldiers told the Tribune they were sent to the banks of the Rio Grande after reports that a dozen migrants crossed illegally Wednesday morning. He said they were under orders to interdict migrants attempting to cross, then call migration authorities to the scene.

But not all are willing to take that risk.

Helen, a 49-year old woman from Cameroon said she traveled with her sister to a shelter in Matamoros and, though out of money, said she is thankful for the shelter where she gets three meals a day.

When showed a video of someone crossing the river, she grimaced and said: “I cannot do that, I cannot risk my life. I will wait for immigration.”

She flashed a yellow sticky note with a handwritten number Mexican authorities gave her — 2,348 — and said she plans to stay in Matamoros until that number on the list is reached.

The deployment of additional troops to perform immigration functions is a result of an agreement between the Trump administration and the Mexican government after Trump threatened to impose tariffs on Mexican imports if Mexico didn’t do more to curb the flow of undocumented immigrants who crossed through that country on their way to the United States. As a result, Mexico agreed to dispatch thousands of soldiers to its northern and southern borders.

The latest rule has only added to the tensions in Mexican border cities like Matamoros and Ciudad Juárez. As in Matamoros, soldiers and federal police patrol the banks of the Rio Grande in Ciudad Juárez and on Monday, soldiers also stood at the entry to the border city near Mexican customs officials, something residents said they hadn’t seen lately.

On Wednesday afternoon, the Paso Del Norte bridge connecting Ciudad Juárez and El Paso was briefly shut down as U.S. Customs and Border Protection officials conducted a mobile training exercise where CBP officers in riot gear used concrete barriers to choke off vehicular traffic from Mexico. The exercises became more frequent after the migrant surge. Immediately after the echo of flash bangs reached the Mexican side of the bridge, a woman crossing from Ciudad Juárez shouted: “It’s because of those damn Cubans! Send them all home.”

The policy announced Monday also comes as thousands of migrants, mainly from Central America, have been sent back to Ciudad Juárez under the Trump administration’s Migrant Protection Protocols, or MPP.

The program returns asylum seekers back to Mexico as they wait for their immigration hearings. As of Tuesday, more than 10,000 people had been returned to Ciudad Juárez under the policy. That’s put a strain on local and state resources as officials have scrambled to provide shelter space for the asylum seekers who have to wait months to return for their hearings.

That tension is just one more reason people like Arturo Cerrano, a Cuban migrant waiting in Ciudad Juárez, said Trump’s new policy shouldn’t apply to him. Arturo said he was targeted in Cuba because he’s gay and showed off a two-inch scar on his head he received after being assaulted in the communist country.

“You think I am going to live in a country like that all of my life?,” he said. “All we want is for [U.S. officials] to listen to us.”

Disclosure: The Southern Poverty Law Center has been a financial supporter of The Texas Tribune, a nonprofit, nonpartisan news that is funded in part by donations from members, foundations and corporate sponsors. Financial supporters play no role in the Tribune’s journalism. Find a complete list of them here.

This article originally appeared in The Texas Tribune at https://www.texastribune.org/2019/07/18/mexico-trumps-latest-asylum-policy-stirs-anger-fear-and-confusion/.