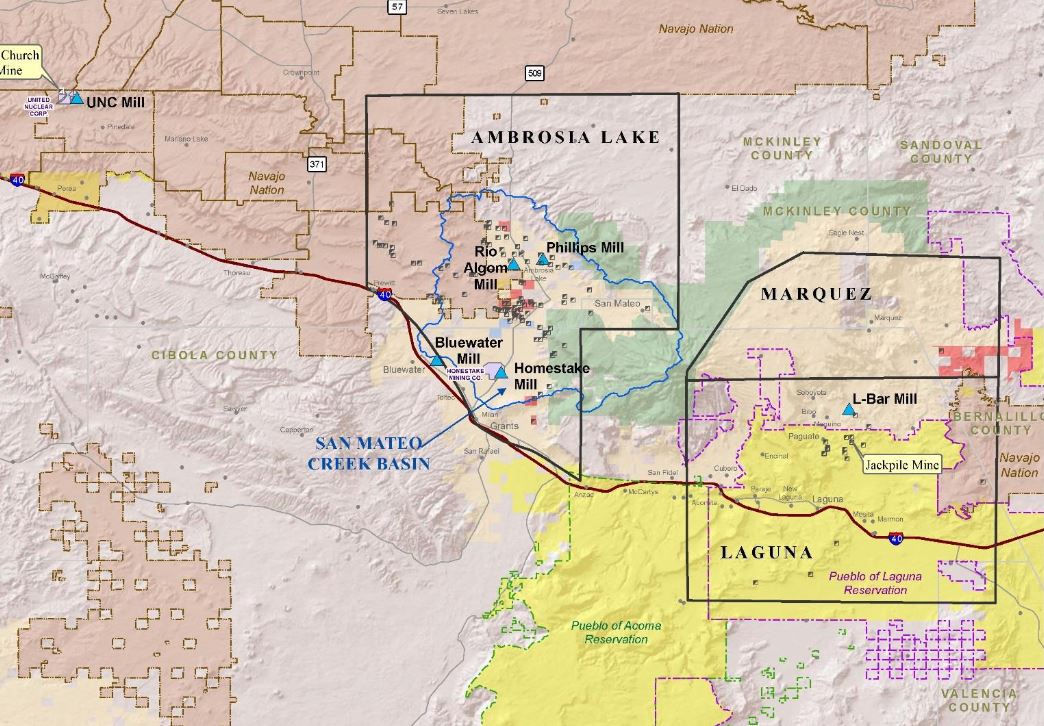 The San Mateo Creek Basin is part of the Grants Mining District, where uranium was mined from the 1950s through the 1990s.

The EPA has added a New Mexico uranium mining basin to a list of sites “targeted for immediate, intense action.” The agency added the San Mateo Creek Basin site, part of the Grants Mining District, to the Administrator’s “Superfund Emphasis List” in mid-July, though the area is not a Superfund site.

The agency said sites selected for the Administrator’s Superfund Emphasis List are those that “can benefit from Administrator Wheeler’s direct engagement and have identifiable actions to protect human health and the environment,” and require “timely resolution of specific issues to expedite cleanup and redevelopment efforts.”

The San Mateo Creek Basin stretches across 300 square miles of land within the Rio San Jose drainage basin, across McKinley and Cibola counties in Northwestern New Mexico. The area is known for its uranium production during the Cold War.

Uranium mining in the area halted in the mid-1980s, leaving a legacy of waste and environmental impacts that the nearby communities continue to struggle with over thirty years later. Today, there are 85 legacy uranium mines and 4 legacy uranium mill sites within the San Mateo Creek Basin.

A legacy of contamination

The state has been keeping an eye on the area for decades. The New Mexico Environment Department (NMED) has monitored ground water in the area off and on since the 1970s, according to Kurt Vollbrecht, manager of the Ground Water Quality Bureau’s Mining Environmental Compliance Section.

The EPA began its own data collection in the area about a decade ago, when it installed additional groundwater monitoring wells and conducted sampling.

There’s no question whether the legacy mining sites have negatively impacted the environment, Vollbrecht said.

“There are definitely impacts to groundwater that have been determined through groundwater monitoring,” Vollbrecht told NM Political Report. “There was significant mine de-watering that occurred for thirty-plus years, and that water was not very well treated. That started back in the late 1950s. That certainly impacted groundwater. The nature and extent of that impact has not yet been determined.”

Vollbrecht was adamant that no public drinking water systems have been impacted—but nearby mining sites have contaminated private wells in the area.

“Those individuals have been provided with either on-site treatment systems or alternative water,” he said. “At this time, there’s no indication that public drinking water systems have been impacted. “There’s a potential that could happen some day, but that day is off into the future, and the intent is to understand what the impact is before we reach that point.”

Contentions over clean up

The EPA has considered designating the San Mateo Creek Basin area a Superfund site for over a year. In November 2017, the agency sent a letter to NMED raising concerns that evidence showed hazardous substances had impacted private drinking water wells and threatened to impact public water supplies.

The Gallup Independent reported at the time that the EPA asked for consensus from state and local governments to add the site to the Superfund National Priorities List. But the agency ran into opposition from local officials.

In 2018, the Santa Fe New Mexican reported that Cibola County commissioners adopted a resolution expressing their concerns that the Superfund designation may deter future mining operations in the area and negatively impact property values.

“The proposed listing … has the potential to negatively affect this activity before we have the opportunity to deliberate its future development,” the resolution stated. “A rushed listing of the entire basin may have unintended consequences and may not be the best solution for our community,” it said.

Cibola County manager Kate Fletcher, who assumed her position in April 2018, declined to comment on this story.

NMED’s Water Protection Division Director Rebecca Roose told NM Political Report that despite being added to the “Superfund Emphasis List,” the site is not being considered for Superfund designation.

In fact, the San Mateo Creek Basin site is the only site on the Emphasis List that is neither a Superfund site or has been proposed to be given the designation.

“It would be a very different story if it had been designated as Superfund as site,” she added.

Instead, adding the site to the Emphasis List “places a priority on reaching an agreement with the responsible parties to fully characterize the groundwater contamination and develop clean up alternatives,” an EPA spokesperson told NM Political Report.

“EPA, along with our partners at New Mexico Environment Department and the New Mexico Mining and Minerals Division, will seek an agreement from the responsible parties to conduct a remedial investigation [and] feasibility study,” the spokesperson said. “EPA will use this information to develop a proposed cleanup plan to present to the community for their input.”

One option is to have mining companies interested in re-opening the mining sites become “responsible parties” to clean up efforts. At present, there are two companies looking to reopen mining operations in the basin: Rio Grande Resources, which is currently modernizing the Mount Taylor mine for future operations; and Energy Fuels, which has proposed opening the underground Roca Honda mine. The state has not issued a permit for Roca Honda yet, Vollbrecht said.

“It’s about time,” he told NM Political Report. Asked about the county’s stance on designating the basin as a Superfund site, Decker said the county would benefit from a clean up.

“The clean up of any of the uranium legacy sites would be of benefit to the county,” he said. “Once there has been a clean up, the surrounding properties would go up in value, and probably be more economically productive than they are right now.”

The county isn’t opposed to new mining operations, either. “Right now, the Commission sees that if [the mining companies] jump through all the hoops, and can demonstrate the requirements that the federal government and the state government have placed on them, then [the Commission] would see future mining as an economic benefit.”