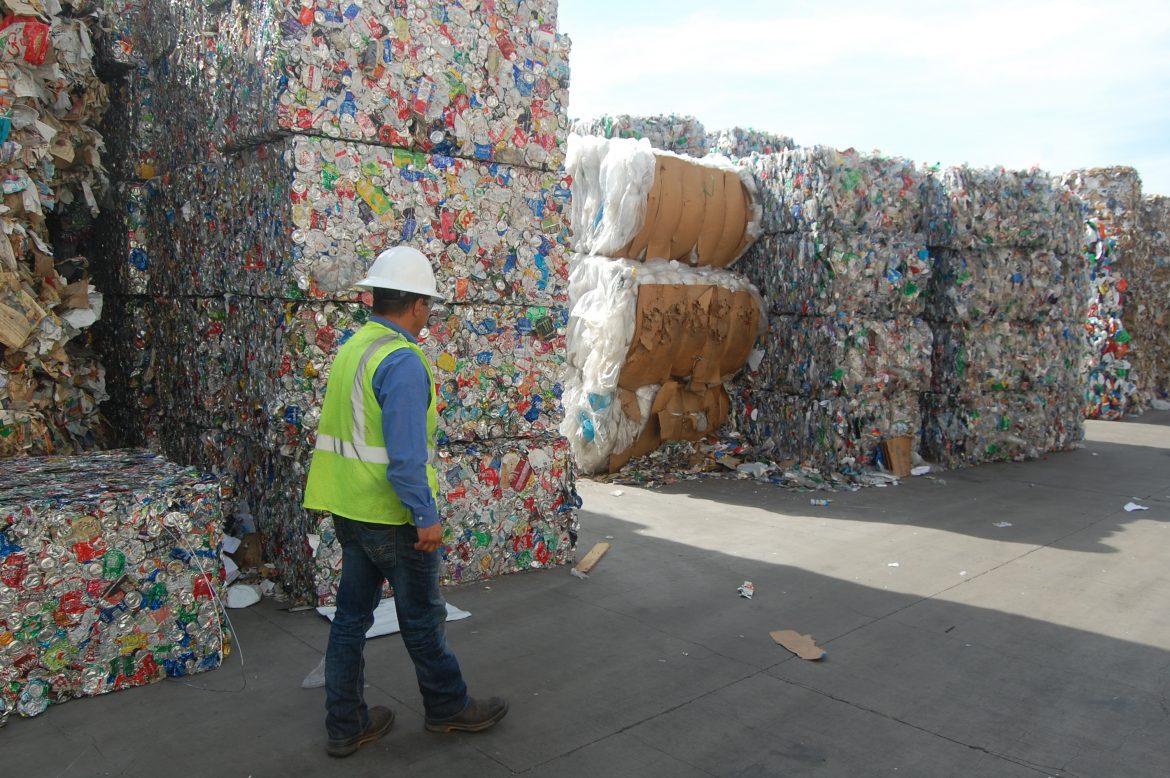 Bales of recyclables from Albuquerque residents await shipment at Friedman Recycling in Albuquerque.

On a hot summer morning at the Friedman Recycling plant in Albuquerque’s North Valley, the city’s pungent recycling mix streams past on a series of conveyor belts, with an array of discards like cardboard, water bottles and soda cans first sorted by thrumming machines and human hands into bins, then compressed into giant bales bound for markets across the country. Workers pick through dense paper bales in search of errant plastic bags, aiming to reduce contamination to three percent, a drop from rates of eight percent accepted just two years ago.

Grimy plastic bags, pizza boxes, garden hoses, and even more plastic bags—unrecyclable waste mixed in by residents, adding up to nearly a third of the city’s recycling stream—is sorted into a massive pile destined for the landfill.

Despite processing costs that have increased over the last three years by about 150 percent to nearly $1 million, Albuquerque’s Director of Solid Waste Management Matthew Whelan says the city is committed to working through recent challenges to their recycling program.

A 2018 Chinese government ban on plastic waste imports led to a worldwide recycling crisis. Recycling programs across the U.S. have struggled to respond to an oversupply of materials, stricter contamination standards and higher processing costs as the glut of recyclables crashed commodity prices and led buyers worldwide to become far more choosy about quality.

“This isn’t a bump in the road. We’re not going to be able to go back to business as usual like it was three or four years ago,” emphasizes Patrick Peck, Director of South Central Solid Waste Authority in Las Cruces. The demand for higher quality material requires greater investments in labor, technology, and education, he says.

This “new normal” is forcing New Mexico communities to take a hard look at their current practices.

Those changes raise questions about the future of recycling programs in New Mexico. Will cities continue to absorb rising costs? Will consumers accept additional responsibility in response to new standards and growing concerns about pollution?

For the remaining curbside programs, recycling directors emphasize the importance of residents adding only accepted items to their recycling bins, free from prohibited materials like plastic bags, cords and food waste. Peck says in this new era, consumer education is key. “We have to have clean, dry material,” he says. “The recycling can is not a second trash can.”

And since prices for recyclables have plummeted, municipalities small and large are relying on new calculations: Which markets are the most reliable? Are communities willing to process materials, then give them away for free?

The most valuable recyclables, with reliable domestic markets, are cardboard, metal (tin and aluminum cans), paper and plastics number 1 (things like water and soda bottles) and number 2 (mostly detergent bottles and milk jugs). Plastics numbered 3-7, a grab bag of packaging that includes yogurt containers, ketchup bottles, and disposable plates, became much harder to recycle after the Chinese ban: A Greenpeace report found that in 2017, prior to the ban, 70 percent of U.S. plastic waste was exported to China and Hong Kong.

As a result, many smaller communities have discontinued collection of mixed plastics. Los Lunas recycling centers limited plastics accepted to numbers 1 and 2 in the past year, yet the village still essentially gives it away, according to Los Lunas Public Works Director Michael Jaramillo. Taos and Gallup also only accept these higher-value plastics.

Santa Fe, Albuquerque and Las Cruces continue to accept mixed plastics, betting the plastics markets will come back. According to Friedman Recycling President Morris Friedman, once cities stop accepting certain materials, it’s “very difficult to get it out of the landfill” even if a market is found later.

Friedman is optimistic about the future of recycling markets, and says the facility his company operates no longer has a backlog of mixed plastics. They recently began shipping baled plastics to a business in the Midwest that recycles them into plastic mats for the construction industry, he says. But he describes the process for developing new mixed plastics markets as “trial and error. You really have to search high and low for them.”

Some are skeptical of New Mexico municipalities’ ability to continue to recycle mixed plastics. Santa Fe Solid Waste Management Director Randall Kippenbrock says he doesn’t have much hope for securing markets for 3-7 plastics, though the city continues to collect them. He says the city may end up limiting collection to those high value materials with domestic markets.

One challenge is the limited in-state market for recycling. Some municipalities sell paper to the McKinley Paper Company in Prewitt, NM. And Albuquerque-based company Growstone had, until recently, converted Albuquerque’s recycled glass into a soil amendment before it went out of business.

Recycling programs can turn to out of state buyers, but shipping costs may prove prohibitive. Still, Santa Fe recycles its glass through a Colorado bottler, and Friedman primarily sells its materials out of state.

Rising processing costs with Friedman Recycling led Santa Fe to reinvest in its own out-of-use Material Recovery Facility and to negotiate a new contract with Town Recycling to process and market its recyclables. The city anticipates greater rebate revenue since Town took over in mid-July. And Kippenbrock says processing the materials locally instead of shipping them to Albuquerque means a smaller carbon footprint.

Smaller municipalities may be able to best respond to the changing landscape for recycling, according to Sarah Pierpont, Executive Director of the New Mexico Recycling Coalition. Rural communities like Moriarty and Raton “were at a little bit of an advantage because they had more control of their programs,” when the Chinese ban hit, she says. These towns can negotiate directly with buyers and flexibly respond to changing markets, she says. And towns with recycling centers where residents sort recyclables themselves save on labor costs.

Some municipalities are looking beyond recycling to reduce waste. In Los Lunas, Jaramillo says, they’re exploring composting green waste like grass clippings with wastewater sludge to make a soil product for use by the village and sold commercially, and recycled glass is ground into sand and used as a soil amendment. At the Estancia Valley Solid Waste Authority in Moriarty, residents can drop off items at a kind of “swap shop” where someone’s trash becomes another’s treasure. Pierpont calls these innovations “a creative way to keep more items in the economy and out of the landfill.”

The problem with plastics

When Silver City officials announced their decision to end curbside recycling, they noted recycling costs had grown to be nearly equal to landfill fees.

But New Mexico Recycling Coalition’s Pierpont emphasizes the costs of landfilling waste are greater in the long run because of regulatory requirements to monitor for groundwater contamination and greenhouse gas emissions. In addition, she says, “Once you put something in the landfill it’s gone—it’s out of the economy.”

A critical concern about plastic waste in particular is its potential for pollution, whether littered across the landscape or left to moulder in landfills. Plastics degrade over time into tiny particles, some smaller than the width of a human hair, known as microplastics. A 2019 study of both active and closed landfills in China found that instead of being a sealed “final sink” for plastics, landfills were in fact a source of microplastics leaching into groundwater. And microplastics have pervaded every corner of the world, including remote lakes, deep oceans, soils and even the air. A French study found evidence of microplastic pollutants traveling 75 miles via air currents, while a research team documented microplastic contamination in limestone aquifers in the Midwest.

Meanwhile plastic consumption continues to climb, with global plastic production expected to triple by 2050, according to the World Economic Forum.

While plastics make up only five percent of American recycling they are a significant part of America’s growing landfills. According to a 2018 Environmental Protection Agency report, plastics represented 28 percent of landfilled products in 2015, the largest share by material, greater than glass, paper or metals.

Finding new markets for mixed plastics and other materials is difficult. The governments of Cambodia, Indonesia and Malaysia all recently turned back shipments of recyclables from the US and other developed countries, with officials declaring they would not accept contaminated foreign waste.

According to Friedman, all the recycled material from New Mexico his company processes is currently being sold to domestic markets. Peck says he regularly confirms that Las Cruces’ recycling “isn’t just being shipped to China or Vietnam and being dumped in a landfill,” adding, “I firmly believe in trying to use domestic markets.”

Some are calling for a greater emphasis on consumer responsibility when it comes to waste reduction. Pierpont points to Albuquerque’s plastic bag ban, which goes into effect January 2020, as an important step. “People are forgetting about reduce and reuse,” she says. “Thinking about it before you buy things is really important.”

Yet so far New Mexico educational efforts like Albuquerque’s “Recycle Right” campaign are focused on recycling habits, with no messages about consumption.

Manufacturers could also play a bigger role in waste reduction. Product stewardship means companies take responsibility for recycling their product at the end of its life, which Pierpont says “shifts the burden upstream,” away from municipalities. Laws in 32 states, including Colorado and Texas, mandate responsibility for products like mattresses, cell phones and paint. Last year Pierpont met with New Mexico state legislators to discuss a memorial on product stewardship, but she says it was just “a first step.”