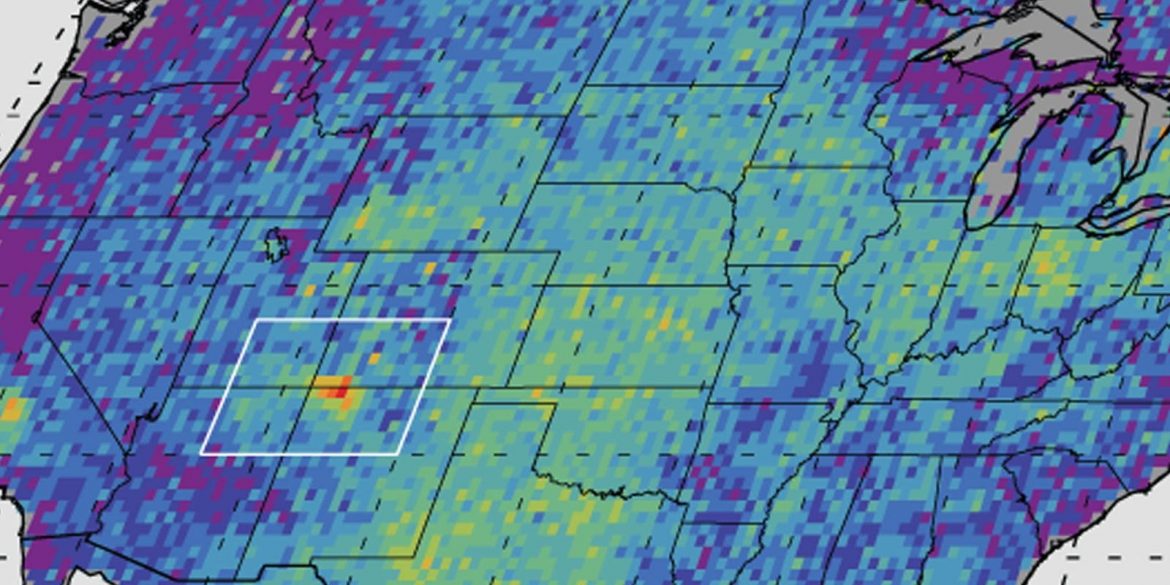 In 2014, the NOAA documented an alarming methane “hotspot” hovering above the Four Corners area. Subsequent research from NASA concluded the hotspot was largely due to oil and gas production in the region.

No one knows exactly how much methane is released into the atmosphere each year in New Mexico. And with record production in oil and gas for the state of New Mexico, and a governor that wants to transition to clean energy, that’s a big problem.

According to EPA data, methane makes up just 10 percent of total greenhouse gas emissions in the U.S.—but it is a particularly potent greenhouse gas, with eighty times the warming power of carbon dioxide. In 2014, the NOAA documented an alarming methane “hotspot” hovering above the Four Corners area. Subsequent research indicated the methane cloud was in fact due to oil and gas production in the region.

Methane is also the primary component of natural gas extracted in New Mexico, and is a valuable revenue-generating resource for the state. Gov. Michelle Lujan Grisham has said she wants to reduce greenhouse gas emissions, including methane emissions. Environmentalists, too, want methane emissions curbed. But in public meetings across the state, oil and gas workers have said they fear increased regulation will “kill industry,” as one member of the public recently put it.

And gauging just how much methane is being released into the atmosphere isn’t easy.

“The biggest problem with the whole debate is that the numbers are unknowable,” David Dixon, economics lecturer at UNM, told NM Political Report. Dixon prepared an economic impact analysis for increased regulations around methane production back in 2007, when then-Governor Bill Richardson proposed reducing methane emissions by 20 percent.

“Neither the state of New Mexico nor the EPA monitors gas coming out of the ground,” Dixon said. Gas producers report on the amount of gas that is delivered to processing plants downstream, he said, which determines the amount of royalties paid to the state.

“Fugitive methane—whether from a leaky well, leaky equipment or pipelines, or bad practices—can only be estimated,” he added. “Gas producers in general, and independent gas producers in particular, resist well-head gas monitoring so vigorously that no one has ever had the political will to even suggest it.”

EPA’s numbers are off

Study after study has shown the EPA is grossly underestimating methane emissions. There were three studies released this summer alone indicating the agency’s methane accounting was not accurate.

A study published in Elementa in May found that ammonia production for use in fertilizers may be releasing up to 100 times more methane than previously thought—and that methane emissions from this relatively small industry may be greater than the EPA’s methane emission estimates for the entire country.

Another study, published in the journal Environmental Science and Technology, found that a small number of leaky wells in the Marcellus Shale basin, which stretches from West Virginia to New York, accounted to 75 percent of methane emissions reported in the area. A third study, published in Geophysical Research Letters in July, found that emissions from leaks and end-use losses from five East Coast cities combined was larger than what the EPA reports for leaks for the entire country.

“There is no hyperbole to the statement that EPA volumes are low,” Dixon said. “EPA volumes are known to be understated because of limitations on reporting requirements to the EPA.”

And there are important policy implications for miscounting. The EPA’s greenhouse gas inventory, which includes methane emissions, is used by states and municipalities to develop regulatory frameworks. Limitations on the EPA’s estimates, therefore, have significant impact on policies across the country, and those being considered here in New Mexico.

NM Political Report reached out to the EPA last week and asked how it tracks methane emissions. The agency was unable to provide a response as of press time.

It offers a number of regulatory suggestions, such as yearly inspections for high volume producing wells to find methane leaks; extending storage tank equipment control requirements to tanks not already under federal regulations; phasing out high-bleed pneumatic controllers, which release methane; and the adoption of best management practices in well liquids unloading and well maintenance to reduce emissions.

“This roadmap was really targeted to some specific questions and specific requests identified by the [New Mexico] Environment Department,” said Robert McEntyre, director of communications at NMOGA. He added that the roadmap was created “in part in response to some of those questions, and in part to be proactive in identifying some solutions to get ahead.”

The report doesn’t offer estimates of potential emission reduction that might be achieved if its proposals are implemented. Instead, it points to EPA data indicating methane emissions actually declined 14 percent nationally between 1990 and 2017, despite oil production in the U.S. growing 80 percent, and natural gas production increasing 51 percent during that period.

The Environmental Defense Fund (EDF), meanwhile, released its own methane policy recommendations for New Mexico, along with a data tool that uses proprietary data from the Permian Basin to help gauge methane emissions more accurately in the area.

Jon Goldstein, director of regulatory and legislative affairs at EDF and former secretary of the state’s Energy, Minerals and Natural Resources Department, said data used in those estimates came from peer-reviewed studies on methane emissions conducted around the country, as well as new data from the Permian Basin.

“EDF went out with leading researchers from places like Stanford, Colorado State University, University of Texas and oil and gas companies, and did a series of 16 studies all around the country,” Goldstein said. “In addition to these nationwide studies, we went back and worked with the University of Wyoming to go out into the Permian in Southeastern New Mexico and take the first publicly-available ground measurements from sites across the Permian. They went to over 100 sites and make on-the-ground measurements.”

According to EDF’s data, the state could reduce methane emissions by 60 percent if it adopts stringent regulations that are already in place in other oil and gas producing states like Colorado and Wyoming.

EDF estimates that the NMOGA proposal, which focuses on just the top four sources of methane leaks, could reduce emissions by just 15 percent.

“The state has set an ambition on establishing rules that build upon and exceed what other states have done,” Goldstein told NM Political Report. “In order to create a framework that is nationally-leading, you need to look at a comprehensive suite of measures.”

McEntyre said oil and gas producers are eager to continue the conversation around methane emissions with state officials.

“Given that we’re in the early stages of this process, we wanted to have a starting point to discuss some components, and to learn from the departments and agencies doing this work what kind of timelines and targets may be considered, as they continue to develop the plan,” McEntyre said. “As the state moves along, I think we’ll have more clarity on timelines and goals.”