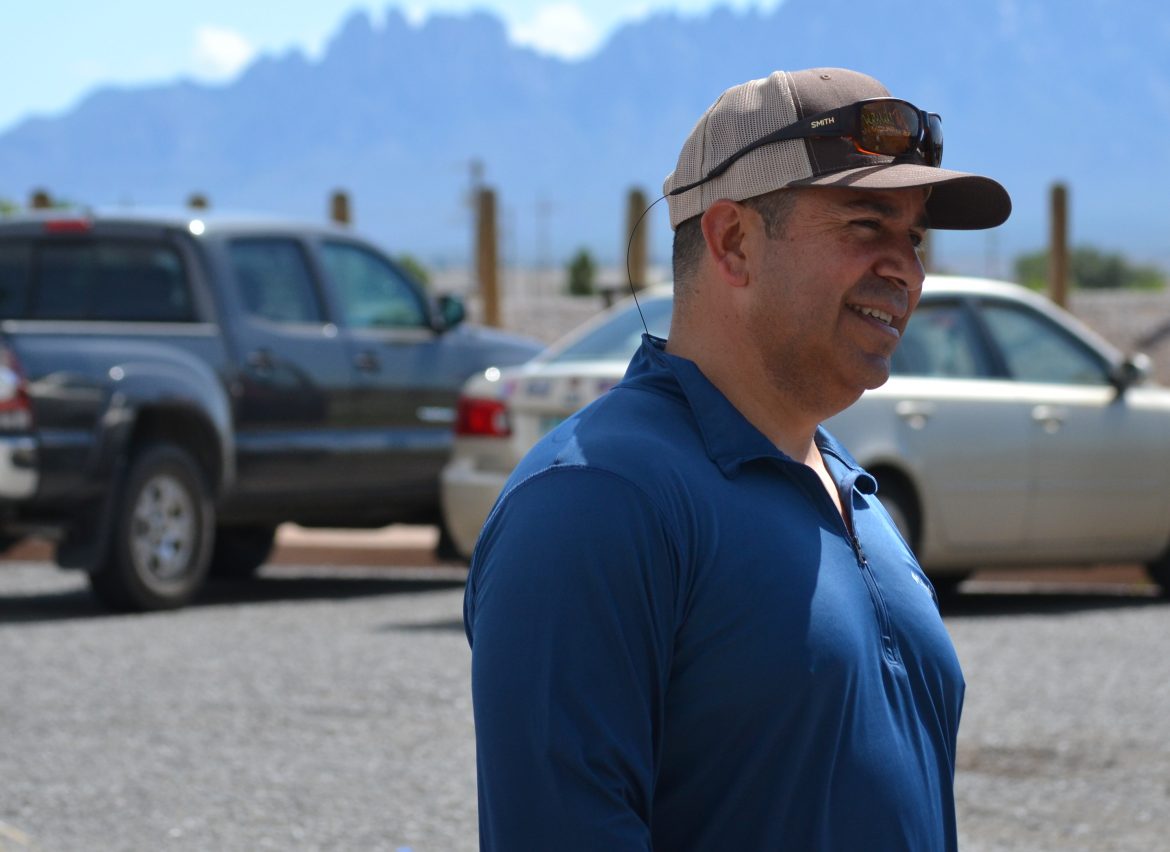 On a quiet Saturday morning, just as an early morning rain had stopped and the clouds drifted away, a pile of inflatable rafts sat piled under a tree at La Llorona Park in Las Cruces. Soon, about a dozen teenagers trickled into the park, ready to float about 3 miles down the river with U.S. Rep. Ben Ray Luján.

Luján’s district is about 300 miles north of the public park, named after a folklore character associated with rivers and children, that butts up against the Rio Grande. Luján wasn’t there on official business, but instead to engage with young people from other parts of the state not within his congressional district as part of his campaign for U.S. Senate.

Luján’s name is likely familiar to those who even casually follow political news. Earlier this year, he was tapped to become the assistant Speaker of the House, the fourth-highest rank in Democratic leadership. His father, Ben Luján, served as the New Mexico Speaker of the House and many have speculated that if Ben Ray Luján stayed the course in Congress he might be in line to succeed U.S. Rep. Nancy Pelosi as Speaker of the House. He was also chair of the powerful Democratic Congressional Campaign Committee, which helps recruit candidates and elect Democrats, in 2016 and 2018. But, earlier this year Luján announced he was running for the U.S. Senate instead of seeking a sixth term in Congress. Now, Luján told NM Political Report he plans to reach out to New Mexicans from all parts of the state.

On that humid—by New Mexico standards—day, engaging with the teens, who were there as part of a trip organized by local environmental groups, was part of Luján’s plan.

Before sliding his one-person inner tube into the water and floating down the river for an hour and a half, Luján jumped right into his introduction. He told the teens about growing up in Pojoaque, New Mexico and the camping trips he took with his friends.

“We were probably cooking with utensils you shouldn’t be cooking with,” Luján said as he began a tale of cooking breakfast, lunch and dinner in repurposed paint can.

“That turned into your pot,” he said.  “You would fill it up with water and beans and you would just leave it on the campfire all night, all day. “Fresh beans in the morning, rice and refried for lunch and then refried refries for dinner.”

While some of the kids may have cringed at the idea of cooking beans in a tin can over an open fire, they seemed to be more shocked to hear the congressman grew up on a New Mexico staple—fried bologna, in a tortilla with mustard and green chile.

“Truth be told, I still eat it,” Luján said, noting that it is usually a big hit at Santa Fe Opera tailgate parties.

Luján’s surname is akin to political royalty in New Mexico. His late father was New Mexico’s Speaker of the House for more than a decade. But Luján also made a name for himself. His first elected position was to the state’s Public Regulation Commission. Four years later when his term ended he ran for and won a seat in Congress, representing the northern part of New Mexico. After more than 10 years in Congress it seemed Luján was eyeing a top leadership position—until U.S. Sen. Tom Udall announced his retirement. But Luján said despite his large amounts of campaign money and his experience, he’s not taking anything for granted.

“I make no assumption that just because someone supported me for the work that I did in the U.S. House, that I automatically have their vote and their support for the U.S. Senate race,” Luján said.

Call it schmoozing, networking or simply campaigning, Luján said he learned from his parents the importance of being available.

“What I learned from the service of my mother and my father is you have to have an open door policy you have to make sure your showing up and available in communities. That you’re listening to people and that you’re understanding that we all come from different walks of life but in the end it’s all about New Mexico,” Luján said.

Luján’s primary opponent, New Mexico Secretary of State Maggie Toulouse Oliver, presents an obvious challenge for Luján. The congressman has a big early financial advantage and the backing of other members of Congress, but next year’s primary election will likely have Democrats split as they choose between a progressive, male, person of color and a progressive female, who has long pushed for more inclusive elections in her capacity as former Bernalillo County Clerk and New Mexico Secretary of State. And while the race has so far been civil, Luján is not shy about saying he’s the person for the job.

“If I did not believe that I was the strongest to serve in the United States Senate, I wouldn’t be running for the seat,” Luján said. “I hope if I earn the support of the people of New Mexico I’ll be able to put to work all of those relationships with members of the House, the Senate and the committee staff that I’ve been able to get to know throughout the years for the good of New Mexico.”

Whoever wins the U.S. Senate primary will face off against one of two Republicans who announced their candidacy earlier this year. Dr. Gavin Clarkson, a former member of the President Donald Trump administration from southern New Mexico, and Albuquerque contractor Mick Rich will face off in the Republican primary next year. But until then, the most closely watched race will probably be the one between Toulouse Oliver and Luján. Both Democrats are already positioning themselves as the best option to push back against the Trump administration.

Toulouse Oliver voluntarily released her taxes, an idea that gained traction after questions about Trump’s finances were called into question. Toulouse took to social media and called on Luján to follow her lead, but Luján did not. He told NM Political Report that his required financial disclosures for Congress already show the whole picture. He said those disclosures are “very telling” and already available online.

“My only source of income right now, which is pretty incredible, but it’s from my work as a House member,” he said. “There’s no other revenue coming in.”

The other hot topic is whether or not Congress should move forward with impeachment hearings. The House can vote to impeach an official, but then the Senate must hold a trial to determine whether to convict the impeached official and remove them from office. Toulouse Oliver has repeatedly called on members of Congress, including Luján, to take action against the president.

But Luján defended his fellow House members saying there have been investigations and inquiries into Trump since Democrats took control in 2017.

“This is important work that’s being done,” he said. “I support the work and I really believe that as far as the inquiry is concerned it was always a matter of ‘when’ not a matter of ‘if.’”

But Luján wasn’t in Las Cruces that day to talk to teens about impeachment, taxes or even his primary opponent. Instead he fielded questions about how to best make an impact and further protect public lands. His answers were boilerplate — talk to your friends and family, get to know your elected officials and make your voice be heard.

But when talking about public lands and preserving them for future generations, his advice was simple.