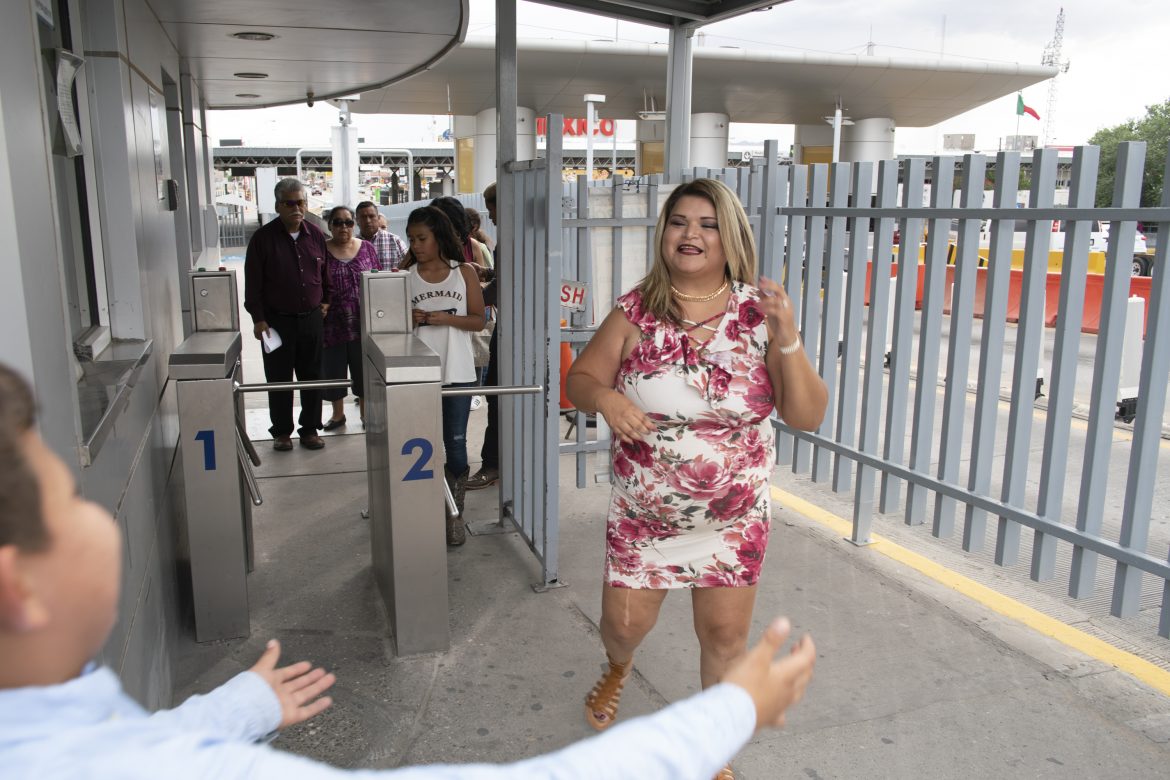 A family member greets a woman crossing the border on the Bridge of the Americas between El Paso and Juárez.

Something clicks inside of me every time I land in El Paso. My shoulders make peace with my neck. I get off the plane and look for my cultural North Star: an actual star shape made of giant light bulbs on top of the Franklin mountains — mountains that hug the city like a protective mother nestling her young.

Home, is above all things, a welcoming place.

Many people say their hometown is hospitable or friendly, but El Paso’s warmth is a fundamental tenet that holds up daily life. We smile at strangers. We invite newcomers to the family barbecue. We gingerly explain Mexican food to them. Older folks call young people they’ve never met “mija” or “mijo.” We mostly greet with a hug and a kiss.

There’s a phrase in Spanish: “tener educación antes de todo” which roughly translates to “being educated above all things.” The saying refers not to formal schooling but to a strict adherence to politeness, to keeping harmony, to shunning rudeness, and to opening your home. That’s the social ethos that guides the city.

It’s an incredibly anomalous, almost halting type of conviviality for a city with a population of 682,699, only about 12,000 fewer residents than Boston (where I now live), according to the 2018 census.

This social contract of kinship, help, and cooperation is the reason I was not surprised to learn of Gilbert Serna, the Wal-Mart employee who, during the deadliest massacre of Latinos in this country, ran ahead of a determined killer to corral shoppers to the safety of steel shipping containers at the back of the store. Or of Chris Grant, the shopper who distracted the killer by throwing bottles at him. I was also not surprised by the people who loaded wounded victims into the back of their pickup trucks and drove them to medical help. I didn’t recognize the scene that was unfolding in my city. But I recognized the generosity of spirit that met even this gruesome test.

El Paso’s influence sprawls beyond its limits. The city anchors a metropolitan region it shares with Las Cruces, New Mexico, to the west, and Cuidad Juárez, in Mexico, to the south. These three cities — but more palpably El Paso and Juárez, because of their proximity, larger populations and shared history and trade — total about 2 million people, and feel like one community.

This is an old place, occupied and reoccupied. There were the indigenous peoples of the Manso and Suma tribes, then the Spanish arrived in the 1590s, followed by an independent Mexico, the Republic of Texas, the United States, then the Confederate States and back to the United States. Currently, 83% of the county’s population is Latinx.

I was born in Juárez, El Paso’s sister city enclosed by similar mother mountains, but separated from her twin by the edifice of a man-made border.

My parents, initially undocumented, each with no more than a middle school education, moved to El Paso County before my second birthday. I grew up going to Juárez every weekend, saying nouns in English and verbs in Spanish, selling Mexican candies to my friends at school, feeling wholly American.

Binationality is not a fact of life here. It is life. How can we be whole without our sister?

Some people have been here for generations, their ancestors witness to the lynchings of Mexicans in the early 19th century. Some arrived yesterday. Some cross the border every day to go to work or school or to visit loved ones. Young people date folks on the other side of the border. My 18-year-old cousin lives in El Paso but goes to the movie theater in Juárez to have Takis flavored popcorn.

I’m struck by the national media descriptors of the shooting’s setting: “A popular place for Mexican shoppers.” That’s all of El Paso. Mexican shoppers are our tíos and friends and grandmas. My mom worked at Wal-Mart. Not the Wal-Mart where the shooting took place, but one nearby where the customers would have looked and sounded the same.

Some of us speak only Spanish, perfectly enunciated and landing hard after every syllable. Some of us traffic only in Spanglish, and border Spanglish at that. We fuse our own words together as if we are part of a great lineage that requires its own mythical vernacular. Others unfurl only English syllables from their brown mouths.

These pluralities of identity are a source of strength.

El Paso was the first major U.S. city to elect a Mexican-American mayor, in 1957, when Mexicans were restricted from many public spaces in other parts of the country. The city was the first in the nation to pass a local desegregation law, two years before the Civil Rights Act of 1964. El Paso integrated collegiate sports, promising African-Americans a dignified life off of the basketball court, a decision that brought scorn from people in the South.

Now, El Paso business owners pass out free popsicles for mourners on a 100-degree day. They prepare food for members of the local press, which has been covering the tragedy that will forever taint the city. They stand in the blistering heat with other mourning strangers.

El Paso loves hard, but it’s a complicated place, like everywhere else. And to truly love a place is to look at it honestly. For one thing, El Paso is civically disengaged. Voter turnout has been desperately low for decades. No one believed in our city for a long time — not state lawmakers and maybe not even locals. We were too brown and too unruly for Texas to be a proud mother. We voted blue and spoke with a Spanish accent, not a Texas drawl.

We were a low wage city, making huge corporations a ton of money with the sweat from our mixed-race bodies. Before Wal-Mart, my mom worked at Wrangler making blue jeans for $5.15 an hour, my dad at Levi’s. Then the North American Free Trade Agreement came and many factories moved to Juárez, where they could pay our cousins a lot less. This was a part of the world to extract land and labor from, not invest in.

Even in the late ’90s, our politics were mostly controlled by a white oligarchy backed by a few developers and bankers. Here we were, a big Latinx community — janitors working all day and going to English classes at night, teachers working toward their pensions, watching their kids leave the city because of the dearth of good jobs — too poor or too distracted with surviving to notice how disenfranchised we were.

Tired of the neglect, El Paso lawyers and advocates in 1994 filed a court of inquiry against the state, forcing it to turn over records that showed El Paso, then the fourth largest city in Texas, received less in state funds than the smallest rural communities.

And yet, we laughed and danced at carne asadas and piñata parties. We birthed and raised babies — each generation striving for something unimaginable to the prior. Children with parents like mine went off to fancy schools out of state, or they stayed and bought homes close to their families. We lived without fear.

The city has changed course in less than a generation thanks in part to an ambitious and aggressive progressive movement that spawned the likes of presidential candidate Beto O’Rourke and congresswoman Veronica Escobar. Now El Paso boasts a redeveloping downtown, a $90 million trolley system in the city’s core and new parks and expanded libraries thanks to a nearly half-billion-dollar bond approved by voters.

Still, those colonial roots run deep. That white oligarchy may not be as dominant as it once was, but it still runs through local politics. Babies are praised more if they’re born with alabaster skin. “Que blanquito!” Latina grandmothers rejoice upon seeing a light-skinned infant.

We’re no monolith. Immigrant communities are not exempt from anti-immigrant sentiment. Brothers and sisters in the same family hold opposing political views. The same divisions polarizing the country exist here, too. In 2016, 26 percent of voters supported Donald Trump — a number that surprised national news outlets, but not me. Assimilation can bring a sense of separation from one’s immigrant origins.

We are one community with Juárez, but that community is also defined by hierarchies. Affluent Mexicans, most often of lighter skin, look down on working class Mexican-American “pochos,” the sons and daughters of immigrants who can’t roll their Rs with quite the same elegance. Brown skin is no shield against internalizing the systems that oppressed one’s ancestors or still oppress oneself.

And yet, we’re a people that above all else, strive for peace and grace.

My home is also the city that has mobilized to house and feed Central American migrants — many separated from their families — treating them with dignity when the president has called some of them animals.

The dehumanizing rhetoric from President Trump and the alleged shooter in El Paso aims to do one thing: to flatten a people. That’s what cruelty does. It crushes the multiplicities that make us human and whole, until we are dust to be swept away.

I believe El Pasoans when they say the city will heal. I know the heart of this place. We’ll show the world how we come together, they say. I write all of this because I believe that, too. And I want the world to know we’re a complicated, nuanced place — which underscores just how special this corner of the world is. Because despite our differences, we’ve maintained harmony.

Before the President called people like my parents rapists and criminals, before El Paso became the epicenter for the administration’s experiments on how to curb the “invasion” — from family separations to keeping asylum seekers in Mexico — I thought I could go home and nestle in the mountains, protected and warm.

We left our doors unlocked. We watched the country’s turmoil, somehow thinking we were too remote and ignored to be a target. We crossed the border, spoke our Spanglish, and lived our lives

Now, we’re the epicenter of one of the biggest hate crimes in modern history. Since the shooting, I’ve read stories about scared El Pasoans who had never before held guns but are rushing to buy weapons. One resident, April Sanchez, told The Guardian, “This isn’t something I’m proud of.” She added: “It makes me sad and angry that I’m even here. I’m heartbroken, but I’m also afraid.”

This essay was published in partnership with The Trace. The Trace is an independent, nonpartisan, nonprofit newsroom dedicated to shining a light on America’s gun violence crisis.

Maria Garcia is the Senior Editor of Arts and Culture at WBUR in Boston. She was a reporter in El Paso for more than a decade, covering city and border policy.