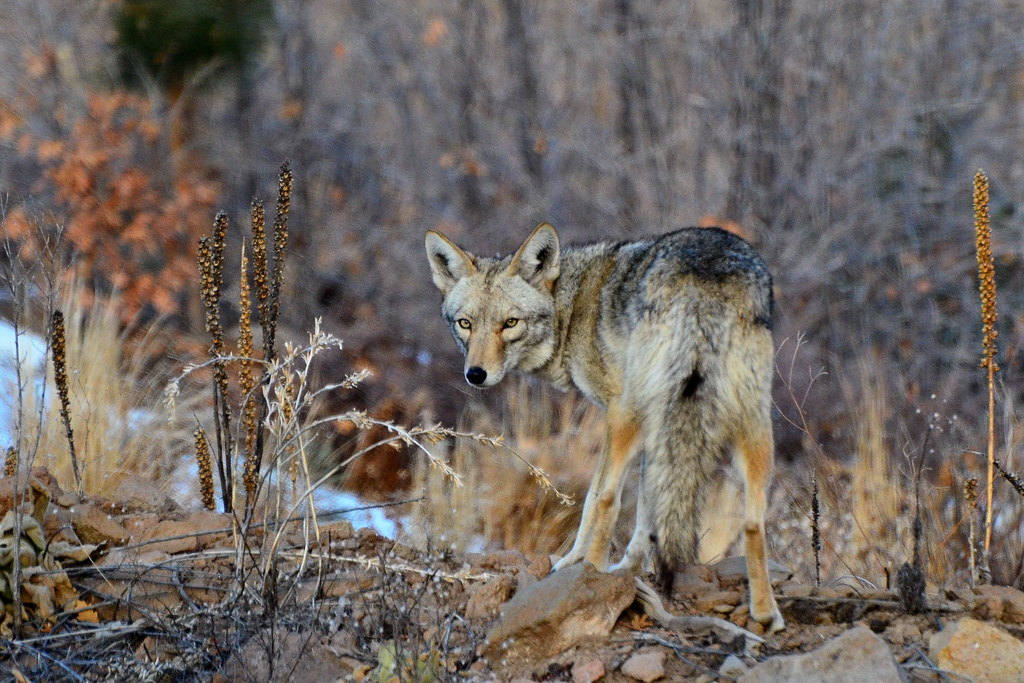 Sodium cyanide bombs are used to kill coyotes and other predators.

Doña Ana County commissioners gave a federal agency the green light to use lethal sodium cyanide bombs to combat livestock predation. County commissioners voted 3-2 Tuesday to approve an amended contract with the federal Wildlife Services agency to continue use of the devices, despite an outpouring of opposition from local environmentalists.

“It’s pretty shocking,” said Amanda Munro, communications director for the Southwest Environmental Center and a resident of Las Cruces. “I’m very disappointed in the commissioners who voted to instate this next amendment.”

Southwest Environmental Center and other groups have been fighting the use of sodium cyanide bombs, also called M-44s, in Doña Ana county. Environmentalists have argued that the devices are inhumane and that the use of lethal measures to combat predation are based on outdated science.

“It’s completely unnecessary as far as we’re concerned,” said Kelly Nokes, an attorney at the Western Environmental Law Center, who has been fighting M-44s at the federal level. “There are plenty of viable alternative options for dealing with predators. There’s also a whole body of scientific literature out there that shows that lethal control of predators is not exactly the most effective and most efficient in the first place.”

Wildlife Services disagrees. The agency, which sits within the U.S. Department of Agriculture, is tasked with providing “federal leadership and expertise to resolve wildlife conflicts to allow people and wildlife to coexist,” under the USDA’s Animal and Plant Health Inspection Service (APHIS). It also provides a form of pest control to ranchers and livestock handlers for removing predators like coyotes. It contracts with counties across the country, mostly in the West, to provide what’s referred to as “wildlife damage management,” using a range of lethal and non-lethal methods to combat local predator populations.

Wildlife Services often prefers M-44s. The agency has pushed to use the devices within New Mexico even as local public outcry over them has grown. The agency considers them to be “effective and environmentally sound wildlife damage management tool,” according to a pamphlet published by the agency in May 2019.

“APHIS Wildlife Services understands the public’s concern regarding the use of M-44s and is committed to the safe and responsible use of this effective tool for professional wildlife damage management,” a spokesperson for USDA told NM Political Report. “ USDA follows all federal, state and local laws and regulations regarding their use. [Wildlife Services] uses these devices, along with other predator management tools, safely and responsibly. ”

Sodium cyanide bombs date back to the 1970s and are used to kill coyotes and other predators that threaten livestock. The spring-loaded device is inserted into the ground, and topped with scented bait to attract carrion-feeding animals. When an animal bites down on the bait, the spring shoots a pellet of powdered sodium cyanide into the animal’s mouth. The powder combines with saliva in the animal’s mouth to produce hydrogen cyanide gas, a lethal poisonous gas that kills the animal within a few minutes of exposure.

“The thing about M-44s is that they’re indiscriminate. Any carrion-feeding animal that has the ability to trigger the device could be killed by one of these devices,” Nokes told NM Political Report. “They’re targeting coyotes and canine species, that doesn’t mean those are the only animals that can trigger these devices.

The non-target deaths that have concerned advocates. According to data from Wildlife Services, M-44s were responsible for 200 non-target animal deaths in 2017, 20 of which were family pets. Ravens, foxes, wolves and other animals are also often killed by the devices.

Humans have been harmed by the devices, too. On a spring day in 2017, a young boy in Idaho was injured when he accidentally triggered the device, which had been installed in a grassy field near his home. The boy’s dog, standing nearby, was also killed. Three weeks later, Wildlife Services announced it would no longer use M-44s in the state.

That same year, two family pets were killed by sodium cyanide bombs in Wyoming, spurring environmental groups to sue Wildlife Services. On Monday, a federal court in Cheyenne OK’d a ban on using the devices on 10 million acres of public land.

In Oregon, Gov. Kate Brown signed a law banning M-44s in the state earlier this summer, after a protected wolf was killed by one of the devices in Northeast region of the state. The killing was dubbed by state wildlife officials as an “unintentional take” on the part of Wildlife Services.

Earlier this year, Doña Ana County Commission Manuel Sanchez introduced an amendment to the county’s contract with Wildlife Services. The amendment required Wildlife Services to attempt to resolve a predation problem using non-lethal methods at least twice before resorting to lethal methods like M-44s, unless the animal poses an imminent threat to human health or safety. It was approved by the Commission 3-2, with Commissioners Lynn Ellins and Isabella Solis opposing. The new contract was then approved 4-1, with Commissioner Shannon Reynolds opposing.

Wildlife Services wasn’t happy with the new wording. The agency refused to sign the amended contract, spurring the County Commissioners to revise the amendment. The revised wording was approved on a 3-2 vote, with Commissioners Sanchez and Reynolds opposing.

The new contract reads: “For each request for assistance, at least two attempts to resolve the problem using non-lethal methods, on-site and on separate days, are required before resorting to lethal methods, unless the animal poses an imminent threat to human health or safety, property, livestock, companion animals and confirmed depredations.”

The addition amounts to a complete retreat from the initial amendment, opponents say.

“It now gives the USDA Wildlife Services a bevy of reasons to bypass the two non-lethal-attempts requirement,” Commissioner Sanchez told NM Political Report in an email. “I’m disappointed that the County Commission did not keep the original resolution with my amendment. That was an opportunity for a more humane approach towards wildlife management in our local ecosystem that still respected the safety needs of our residents.  Instead of our board showing conviction towards progress in Doña Ana County, we maintain a status quo.”

“This issue has been discussed at four separate County Commission meetings, and it’s been voted on at three of those. Under pressure from Wildlife Services, the commissioners have been compromising more and more on every single vote until they re-established the state quo,” Munro told NM Political Report. “They gave Wildlife Services permission to essentially do what they’ve always done: Kill as many animals as they want, for any reason they want, using any method that they want, and not have to look at what the public wants.”

Munro sees similarities between the Doña Ana County contract and another political showdown in Grant County. In the summer of 2018, Grant County Commissioners voted to renew its contract with Wildlife Services, despite hours of public comment against the agency and the lethal tools at its disposal, including M-44s. The Grant County Commissioners also walked back amendments to the contract that would have banned the agency from using sodium cyanide bombs and other indiscriminate tools, according to Silver City Daily Press.

“They voted to keep Wildlife Services from using M-44s and traps, and came under pressure from the agency who refused to sign the contract, and they reversed their decision less than a month later,” Munro said. “It is really disappointing.”