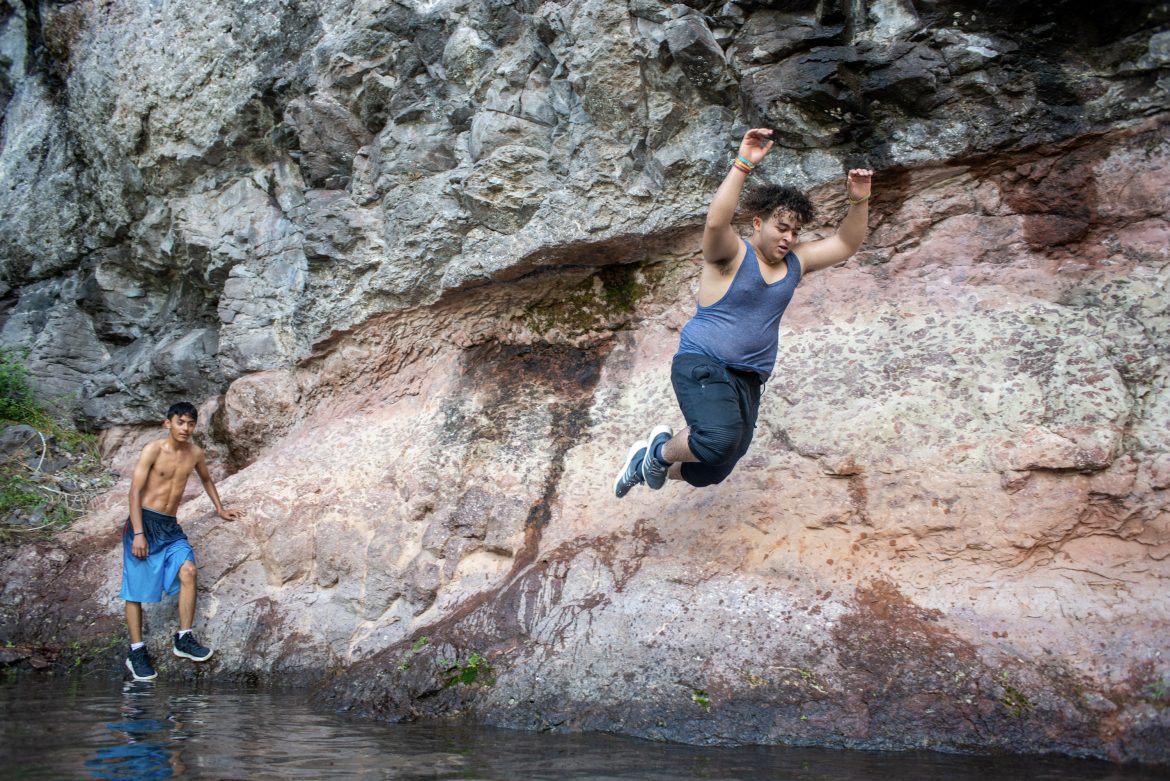 GILA NATIONAL FOREST — In the shadow of a cliff, 15-year-old Nathan spools an arc of fishing line into the Gila River and waits. Tall and watchful, the teen has been quiet for most of the day during this outing, organized by Families and Youth Incorporated (FYI), a Las Cruces nonprofit that works with troubled kids.

A little while ago, at a swimming hole downstream, Nathan stood on the bank skipping stones while the other kids whooped and splashed and jumped from depressions in the cliff face into the cool water. He doesn’t know how to swim. Now he stands in the middle of the river, wet sneakers forgotten, watching the water in front of him for any sign of movement. Finally, a tug: He reels a fist-sized fish into the bright August light. For the first time today, he is smiling.

Like the other teenagers on this trip, Nathan has broken society’s rules — all the kids are on probation — and this day on the river is meant to be a kind of therapy as much as a recreational outing. Research suggests that getting out into nature is good for kids’ mental and physical health — possibly even more so for troubled kids — and trip leaders are hoping time on the river will ease those troubles. Through a local program that steers kids on probation to healthy activities, this group — nine boys and one girl — are here in the water for a day, two hours from home and a world away from their day-to-day lives.

One 15-year-old got expelled from multiple schools for selling weed. Another kid, Adam, skipped school and left home without permission one too many times and has to wear an ankle monitor. Many live lives marked by trauma and poverty; 37 percent of kids in Doña Ana County, which includes Las Cruces, live below the poverty level, compared to 26 percent of children statewide. But here on the river, all of those worries fall away.

“A lot of these kids have never seen any of this stuff,” says Thomas Zubia, one of the FYI guides, during the ride from Las Cruces to the Gila. “There’s a lot of mumbling and grumbling all the way, until they get out there.”

JJ, the jokester of the group, pipes up from the back of the van. “There’s no data out here? I’m already going crazy.”

Three hours later, he’s jumping off the rocks into the river again and again, laughing.

This outing may look like kids just having fun, but it could be part of the solution to one of New Mexico’s most stubborn problems. For years, the state has ranked last in child well-being and second-to-last in childhood economic well-being. While reversing those trends will require a range of remedies, a new program that emerged from this year’s legislative session promotes an important but often overlooked one: getting kids outside.

The Outdoor Equity Fund (OEF) — the first of its kind in the nation — will provide microgrants to nonprofit organizations like FYI as well as local governments and tribes, to purchase fishing poles, tents, and other outdoor equipment and to cover the cost of transportation and entry fees to recreation areas. A 2018 report from the Outdoor Industry Association found that a decreasing number of young adults engage in outdoor recreation, and expensive equipment was the primary reason why. Cost may also help explain why, here in the Southwest, 60 percent of people living within 50 miles of a national forest identify as people of color, but they account for only about 19 percent of National Forest visitors, according to a 2018 study in the Journal of Forestry.

On today’s trip, the fishing pole Nathan uses to snag his fish — a native Sonora sucker — is a loaner from Nuestra Tierra Conservation Project founder Gabe Vasquez, one of the architects of the new law and the outing’s volunteer fishing guide. If FYI succeeds in winning an OEF grant — it plans to apply as soon as the state begins accepting applications — it can buy poles to keep on hand to loan out to kids, hire a paid guide, and do these kinds of trips more often. “This is the potential of the Outdoor Equity Fund,” Vasquez says, nodding toward the kids fishing in the river and climbing on the rocks.

With such a high percentage of  kids living in poverty, the state needed a dedicated program to ensure more disadvantaged kids get to enjoy outdoor experiences like this one, says Rep. Angelica Rubio (D-Doña Ana), who coauthored the legislation.

“Parents have two or three jobs, and can’t really afford to take their kids out camping or anything like that, but this Outdoor Equity Fund can provide some additional funding to the organizations who are already doing this work,” says Rubio, who grew up in Lake Arthur in southern New Mexico.

A host of studies show just how much good the outdoors can do for kids. A study led by environmental psychologist Nancy M. Wells of Cornell University found that kids in rural upstate New York — particularly those with high stress levels — showed greater resilience to stress and adversity when they were close to natural areas. Other research suggests that time in nature improves concentration and social skills and eases depression.

“ADD goes down just walking through trees in an urban park, and kids need to move more and of course that’s easier to do outside,” says Richard Louv, who wrote an influential book called Last Child in the Woods: Saving Our Children From Nature Deficit Disorder, about the decline in kids’ outdoor activity in recent decades and the consequences for health and well-being. “It helps creativity, and kids learn more when they’re outdoors.”

A February 2019 study offers some of the most conclusive evidence to date of nature as medicine. Parsing 28 years’ worth of data on Danish youth, researchers found that people raised in close proximity to nature have a 55 percent lower chance of developing mental illnesses. The more access they had to the outdoors as kids, the better their overall mental health as adults.

Louv acknowledges that for some kids — especially those who have never been exposed to the outdoors — venturing into nature can be off-putting, at least at first. When he and other guides took a group of teenage gang members into the woods near San Diego, “These big guys with tattoos were terrified,” he recalls. Used to the rhythms of the city, the sounds of wind rustling the trees and creatures scampering across the forest floor were entirely foreign to them. But it didn’t take long for them to embrace their new environment. “By the end of the day they were 8-year-olds jumping over a creek.”

Humans evolved in nature, just like other animals, so it makes sense that that’s where we thrive, he adds. “This is in our DNA,” he says. “Now in some people it’s so buried that it’s not going to be active. But for most of us, it’s part of who we are, part of our humanity. That’s why I’m glad New Mexico is doing this.”

The outdoor equity program is also about instilling a conservation ethic early in life, says Vasquez, who is also a Las Cruces city councilor. Kids who play in nature are more likely to want to protect it when they become adults, studies suggest.

“I really do hope it lifts up kids’ spirits and curiosity,” says New Mexico Youth Conservation Corps Executive Director Sarah Wood, who will oversee the Outdoor Equity Fund program. “And having more New Mexicans as [environmental] stewards is going to be really wonderful.” She is crafting a rule that will detail how the OEF will work. The state will hold public meetings on the draft rule in Albuquerque and Las Cruces in mid-November, and a final rule will be published in December. (Updates will be available on the NMYCC web site.)

For Vasquez, the new program is the realization of a longtime dream. Growing up in Juárez and El Paso, he learned firsthand how transformative spending time in nature can be for a troubled kid.

Vasquez and Rubio acknowledge that the $100,000 lawmakers earmarked for the fund is not enough to get every kid outside who needs the program’s help to get there. But private donations from several private outdoor and conservation entities, including REI and the Turner Foundation, have already doubled the fund, Vasquez says.

That means that, soon, excursions like today’s trip to the Gila could happen a lot more often — for these and other kids across New Mexico.

Before the group hikes back to the vans, Zubia takes a last look at the kids playing in the water. Whoops and laughter echo against the cliff face. “You saw them at the beginning,” he says, watching them from the river bank. “They were like, ‘No, I don’t want to do this.’ Now look at them.”\