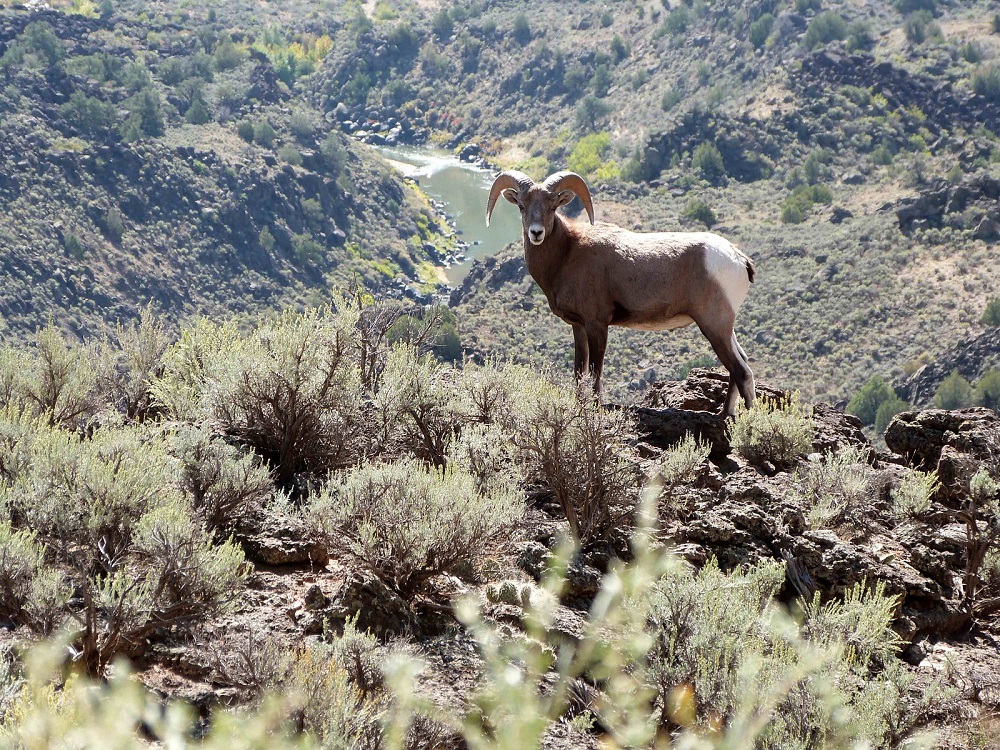 A bighorn sheep standing atop the gorge at the Río Grande del Norte National Monument.

Once considered the most abundant bird in North America, passenger pigeon migrations were a sight to see. Potawatomi tribal leader Simon Pokagon famously described “an unbroken front [of] millions of pigeons” during a migration in 1850. “Never have my astonishment, wonder, and admiration been so stirred as when I have witnessed these birds drop from their course like meteors from heaven,” he wrote.

“And now they’re extinct,” Haaland told audience members at the summit, held last month. “They were a nuisance when they were flying over cities and towns,” she said, adding that the birds were shot by the thousands. “I mention that because this still happens.”

The passenger pigeon has indeed emerged as a harrowing allegory for wildlife management in the 19th and 20th centuries. In 1871, estimates pegged the passenger population to be upwards of 136 million. By the 1890s, flock sizes had plummeted to mere dozens—and the species went extinct September 1, 1914, when the last passenger pigeon, a captive female named Martha held at the Cincinnati Zoo, finally died. As the world today faces the extinction of up to one million species, indigenous communities continue their exceptional stewardship of what remains of our wildlife and wild habitats.

“Wildlife, animals, birds, forests: It’s up to us to protect them,” said Haaland, who is a 35th generation New Mexican and a member of the Laguna Pueblo. “These things have consequences.”

As conservation efforts around the state and the country have swelled in recent years, there’s a growing need for indigenous communities to be included in discussions around wildlife management, Haaland said.

“Indigenous people know all species have their role on Earth. Native cultures and the people of New Mexico have always depended on the rich ecosystems and wildlife of the Upper Rio Grande for our way of life. We honor animals who have sustained us for centuries,” she said. “The pueblos of Taos and Santa Ana are leaders in conscientious wildlife conservation. In fact, their programs rival what some states are doing.”

Too often, indigenous communities are left out of these discussions or are added in as an afterthought, said Garrit Voggessor, director of the National Wildlife Federation’s Tribal Partnerships Program. He pointed to Secretarial Order 3362, which was signed in February 2019 by former Department of Interior Secretary Ryan Zinke. The order directs more resources to be allocated towards conservation efforts for expanding opportunities for big game hunting, but lacked tribal consultation. The order identifies 10 priority states for habitat restoration, including New Mexico.

“I’ve been working with tribes for 20 years on different wildlife conservation issues. It gets frustrating, the exclusion of tribes from conversations, whether its consultation or the secretarial order, or what have you,” Vogessor said.

“Essentially the [secretarial order] excluded tribes. That was a lost opportunity,” agreed Aran Johnson, wildlife biologist for the Southern Ute Tribe in Southern Colorado, but added that tribes can participate as “partners” under the order.

“In this region, you can’t really talk about wildlife management or wildlife movement without bringing the tribes into that conversation. Tribal lands and tribal wildlife management programs are critical to keeping wildlife populations like big game healthy and viable,” Johnson said.

The Southern Ute Tribe has spent the past 20 years identifying corridors between tribal and federal lands to help manage the deer and elk populations. The tribe conducted an extensive study between 2004 and 2010 using GPS radio collars to track mule deer movements, Johnson said. The tribe began a similar study for elk in 2013.

“The average state hunter doesn’t understand that these tribal lands that they can’t access have population-level benefits to these animals that they may enjoy pursuing,” he said. “I can say, unequivocally, through the research I’ve done, if you’re a state hunter and you hunt in Colorado [game management units], you benefit from Southern Ute Tribal lands and Southern Ute tribal management.

The Southern Ute Tribe has been working with its sister Ute Mountain Ute tribe located in southwestern Colorado and the Jicarilla Apache Nation, located in northwestern New Mexico, on wildlife corridor protections. Together, those three tribes represent 1.8 million acres of land, Johnson said.

Tribal communities in many cases have pioneered wildlife management studies and practices. The Jicarilla Apache Nation, for example, has been involved with wildlife management for decades, according to Kyle Tator, wildlife biologist and biological supervisor for the Jicarilla Apache Nation. Tator said the Jicarilla conducted their first radio collar studies in the 1980s, tracking mule deer and elk across the various jurisdictions that make up the animals’ natural habitat.

“What makes Jicarilla unique is its history of sovereign wildlife management,” Tator said. “In 1982, tribes were granted sole management jurisdiction over their wildlife. From that day forward, the [Jicarilla Apache Nation] saw the importance in that, and did not hesitate, and started their professional wildlife program.”

“What we’re really known for is spectacular hunting opportunities, which is a testament to our wildlife management,” he added. “This is something that is ultra-important, despite the multiple jurisdictions and boundaries.”

The Jicarilla has been busy since 2014 updating its wildlife corridor data using new technology. “Technology has come such a long way since the 1980s,” Tator said. The nation has gathered some 50,000 GPS data points as part of its updated elk study. “We’re focused on data and science. Everything is science-based,” he said.

But the nation is still excluded from important decisions made outside tribal land that impact the 90-mile long corridor it has worked so hard to meticulously document.

“Highway fence [was placed] just to the east of the reservation, done with no tribal consultation or consideration to the tribe whatsoever,” Tator said. “So what happened?  Did that unknowingly severe the corridor? We don’t know. It’s something that we’re concerned about and are investigating.”

“I bring it up simply because that’s why we’re here. We’re at the table. The tribes deserve to have that voice, and we expect it moving forward,” he said.

“Taos Pueblo spearheaded that movement, moving 23 bighorn sheep into the gorge in 2005, and the state followed,” said Talisa Puentes Oretga, Taos Pueblo wildlife biologist. At the time, Carson Forest scientists predicted the population might reach as many as 125 individuals. But the program has been a runaway success for the bighorn sheep.

“Today, it is exceeding an estimated 350 individuals at the gorge,” Puentes Ortega said.

Legislators at both the federal and state level seem to be taking notice of these wildlife management success stories, and the role that indigenous communities can play in conservation efforts, spurred in part by the growing presence of indigenous members in elected office.

“Many tribes and pueblos have wildlife corridors, and they are incredibly sophisticated,” said Caitlin Keating-Bitoni, Congressional Science Fellow for U.S. Sen. Tom Udall. “They have vast amounts of data and excellent management of those corridors.”

Keating-Bitoni helped draft Udall’s federal Wildlife Corridors Conservation bill, which contains key provisions to include tribal communities in corridor management. Sen. Udall, who is the ranking member of the Senate Indian Affairs Committee, plans to introduce tribal wildlife corridors legislation as an independent bill this fall, which would give tribal communities leadership roles in expanding wildlife corridors beyond tribal boundaries.

New Mexico’s own Wildlife Corridors Act, which was signed into law earlier this year, also included tribal consultation provisions. State Rep. Georgene Louis, D-Albuquerque, who was a House sponsor of the bill and a member of the Acoma Pueblo, said those provisions are what made the bill so ground-breaking. But while the bill was in a Senate committee, the tribal consultation portion was stripped.

“I’m happy that when it got to the House, we were able to put those provisions back in,” she said. “There are efforts out there, and we should do them jointly.”