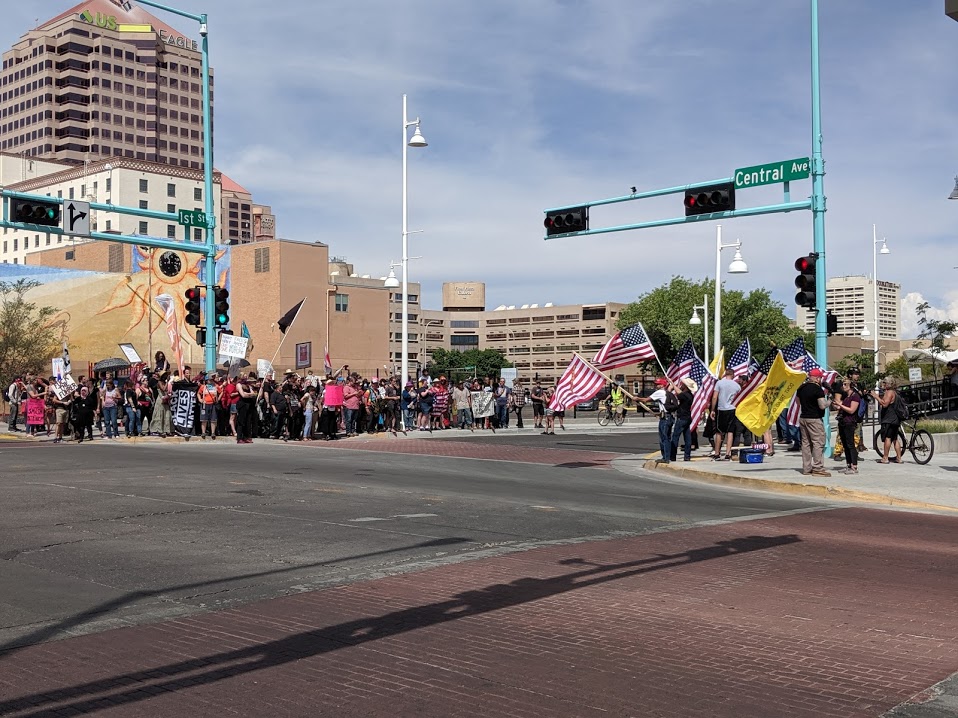 An alt-right rally (right) and a counterprotest (left)

At a rally organized by a far-right, pro-Trump organization, the ralliers were outnumbered five-to-one from counterprotesters.

The rally largely went off without any incident beyond the two groups shouting and chanting at each other.

The protest was organized as a “Freedom First Flag Wave” by Bradley Burris, a New Mexico resident who hosted a Proud Boys podcast earlier this year. About 20 people at its peak showed up for that rally, some wearing helmets and other protective gear, while about 100 showed up at the counterprotest. The Proud Boys were joined by members of the Hiwaymen, a neo-confederate group.

One person was detained afterward two blocks west of the rally. Eyewitnesses said he was involved in an i pulled a gun on someone else. He was with two attendees of the Proud Boy rally.

The arrested man had also knocked the camera out of the hand of someone who was taping him after the incident. ProgressNow New Mexico* posted video.

NM Political Report reached out to the Albuquerque Police Department and will update this post with their response.

The Southern Policy Law Center describes the organization as a hate group, while the alt-right group describes itself as an organization of “Western chauvinists.” The group has been involved in a number of far-right protests, including the infamous Charlottesville, Virginia “Unite the Right” rally that left one counterprotester dead and many of the Portland protests that have featured clashes between far-right groups and antifa protesters.

There were no large-scale clashes between the ralliers and the counterprotesters in Albuquerque on Saturday.

After an Albuquerque Trump campaign rally in May of 2016, peaceful—if heated—protests turned violent after dark. Three protesters were arrested.

That rally was held at the Albuquerque Convention Center, just blocks from the location of Saturday’s rally and counterprotest.

A later Trump campaign rally at a hangar near the Albuquerque International Sunport was much calmer, likely because of the isolated location.

The Rio Rancho rally at the Santa Ana Star Center will also be in a more isolated location than his rally in downtown Albuquerque.

Correction: One man was detained Saturday, not arrested.