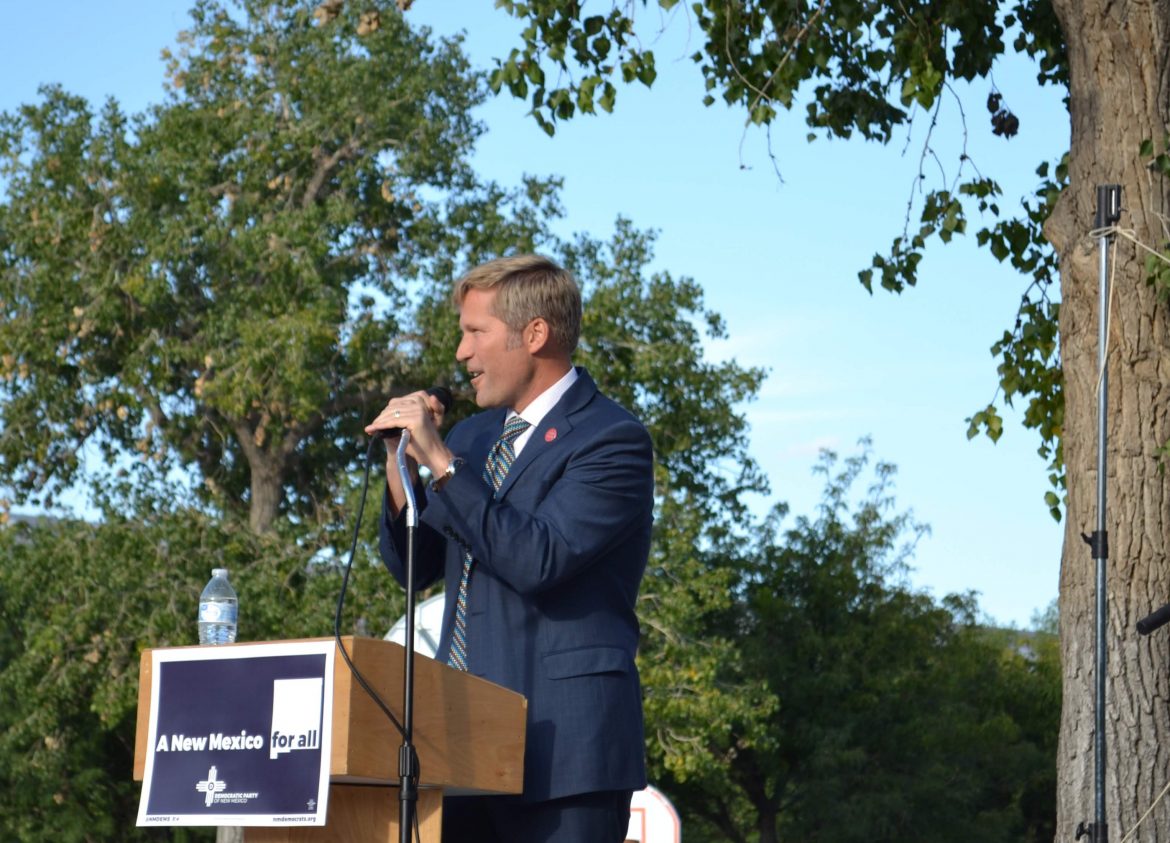 While the city of Rio Rancho prepared for President Donald Trump’s appearance in Rio Rancho, Democrats held a unity rally in Old Town Albuquerque at Tiguex Park. Hundreds of supporters listened to Democratic elected officials and others slam Trump and his agenda.

They also rejected the idea that Trump could win New mexico and be the first Republican presidential candidate to win the state since George W. Bush in 2004.

Supporters held signs calling for Trump to be impeached, calling for action on gun violence and to protect abortion access.

Albuquerque Mayor Tim Keller kicked off the event. He criticized Trump for his rhetoric and said the president’s values did not reflect the values of those in Albuquerque.

“We hold our leaders accountable,” Keller said, “including the president of the United States.”

“We reject white supremacy by definition as hateful and as deeply immoral,” Keller said.

Both Democratic U.S. Senate candidates spoke and both were also harshly critical of the president.

Secretary of State Maggie Toulouse Oliver, one of those U.S. Senate candidates, criticized many things that Trump has done during his first two years in office.

Like others who spoke, she asked for unity and to stand against “bigotry.”

“We value unity. We care for the people in our communities and we care for all of the different cultures that make the richness of our community here in New Mexico. And we will not stand for hate, we stand against it,” she said.

She also said the most important thing the attendees could do is defeat Donald Trump in 2020.

U.S. Rep. Ben Ray Luján, the other U.S. Senate candidate, received a big response from the crowd, who booed when he said that Air Force One had landed, and that Trump believed that he could turn the state red in 2020.

“He doesn’t even know the difference between red and green,” Luján joked.

Like the other speakers, Luján listed his disagreements with Trump, including on diverting money from military projects to fund a border wall.

“He wants to tear us apart,” Luján said. “He wants to divide and conquer. He wants us to forget his lies and failures.”

U.S. Rep. Deb Haaland, who said she lives near the park and often walks her dog there, said she thought that Trump would attack her and other elected officials. All members of New Mexico’s congressional delegation and all statewide officials are Democrats.

But Haaland also voiced her disagreements with Trump.

“The president’s policies are destroying New Mexico and our country,” Haaland told the crowd.

Ahead of Trump’s speech, Gov. Michelle Lujan Grisham, who was at a previously scheduled event to present the Governor’s Humanitarian Award to Deming and Luna County for their work in aiding immigrant families, slammed the president.

“The president, through his ‘tax cut,’ actually raised taxes on many New Mexicans. My administration stepped in to protect New Mexicans’ paychecks,” she said. “And we’re going to keep fighting for New Mexicans, while the president can talk all he likes. His words ring hollow in a place like New Mexico, a state whose hard-working, multicultural identity repudiates the ideology he champions. “

In addition to elected officials, poets and community groups spoke to the hundreds who attended.

The unity event was larger than the on-site protest at the Santa Ana Star Center, an isolated location in Northwest Rio Rancho. While less than 100 protesters were at the rally an hour before the start of the program, and hours before the arrival, thousands of Trump supporters packed the center.