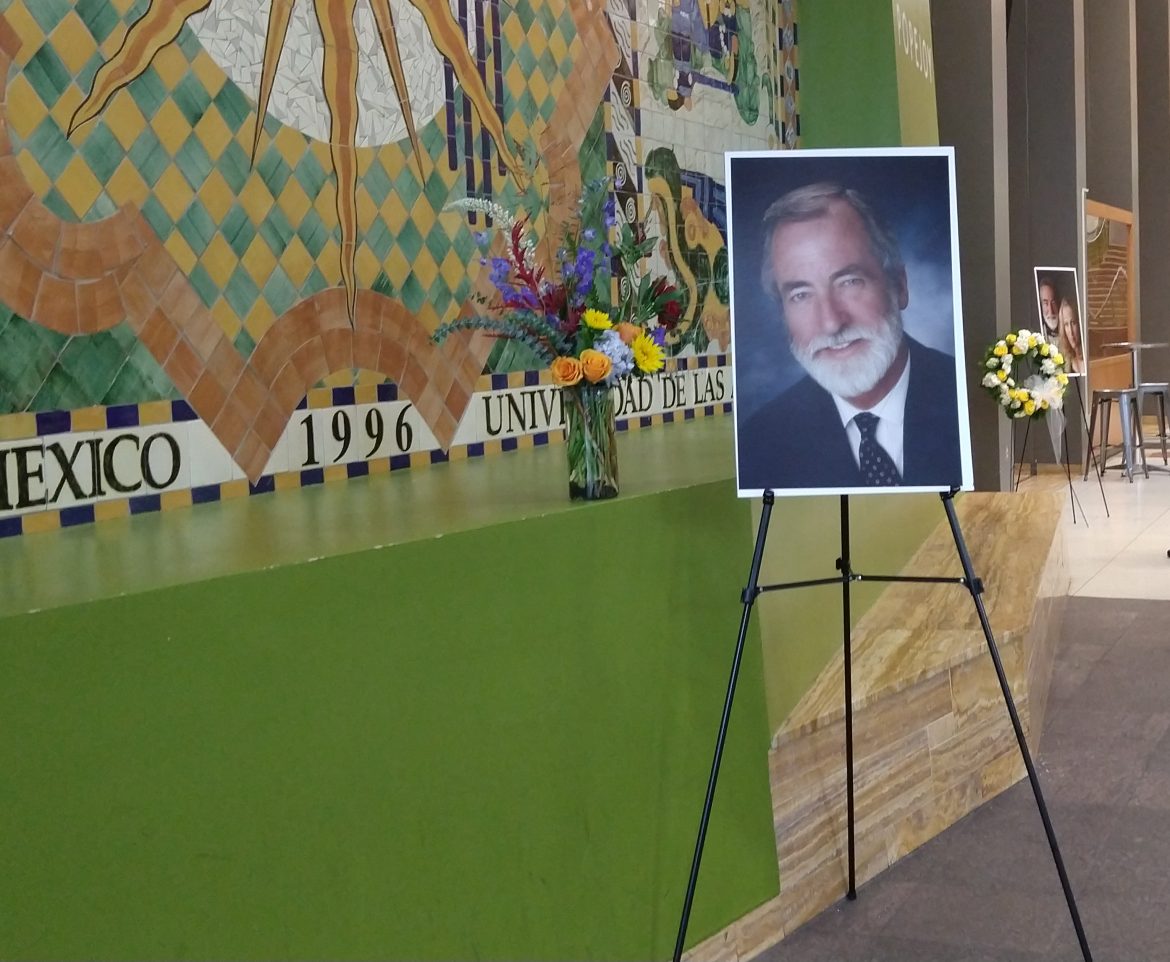 As an early morning rain began to dissipate, friends, family and colleagues shuffled into Albuquerque’s Popejoy Hall to pay their respects. The crowd included a who’s who in political and legal circles.

Gov. Michelle Lujan Grisham spoke at the memorial and said she first met Daniels through his passion for music, which he regularly played at bars and restaurants across the state.

“I got to know what a kind and generous and funny person Charlie Daniels is,” Lujan Grisham said.

The governor also dedicated September 15 to the memory of Daniels.

Speakers fought through tears to tell heartfelt and funny stories about Daniels’ almost 50-year legal career. The theme of the morning was that Daniels was serious while simultaneously funny.

“He modeled frugality by removing half of the lightbulbs in the Supreme Court’s halls, leaving us walking in the dark and writing on the back of scratch paper, using free pens that he picked up at banks and hotels, not just to save the state a few dollars, but to demonstrate that we were committed to do whatever we needed to do to keep the courts open and accessible,” Nakamura said.

She added that he was usually the first person to arrive at the Supreme Court building, with little patience for inclimate weather excuses from others.

“He often reminded both the justices as well as our court staff, ‘Pay attention to the laws of physics and don’t be a snow wussy,'” Nakamura said.

In addition to his legal career, Daniels played in a band with other legal professionals called “Lawyers, Guns and Money” and for the past 20 years in a band called “The Incredible Woodpeckers.” Retired state District Judge Tommy Jewell and former bandmate of Daniels’ recounted a proposed band name Daniels came up with, illustrating the justice’s sense of humor.

“We struggled with a name,” Jewell said. “Charlie said, ‘How about Tommy and the Family Jewels?'”

On another occasion, Jewell said, Daniels let the music get the best of him.

“Charlie got a remote connection for his bass guitar and on a particular song we performed, joined the crowd in a conga line,” he said. “Now it was great, everybody was enthused that the bass player was out dancing with them, but unfortunately Charlie marched a distance from the band and couldn’t hear them, and so he was literally marching to the beat of a different drum.”

The service started with a rendition of Bob Marley’s “Three Little Birds,” performed by local musicians Hillary Smith and Chris Dracup. By the end of the song, the crowd was singing along to the chorus of “Don’t worry about a thing / ‘cause every little thing is gonna be all right.”

The service ended, fittingly with a recording of Daniels singing Bob Dylan’s “Knockin’ on Heaven’s Door” with an added verse from Daniels.

“Momma, put my guitar away / I can’t hold it anymore / I love those times I got to play, now I’m knocking on heaven’s door.”

Besides practicing law, teaching at the University of New Mexico, serving as a state Supreme Court Justice and playing music around the state, Daniels was also an avid race car driver. He got the chance to drive on the Indianapolis Motor Speedway just weeks before he died.

Daniels’ wife, Randi McGinn, told the crowd that people often wonder aloud how Daniels was able to accomplish so much in his life.

“He would tell you he was not extraordinary,” McGinn said. “He just did things that he wanted to do and that’s why he died without a bucket list.”

As the service ended and people began to make there way into the performance hall’s lobby, Daniel’s bandmate and state District Judge William Parnall, who served as the morning’s host, sent one last message to Daniels and one everyone in the crowd was probably thinking as well.

“Thank you, everybody,” Parnall said. “We miss you Charlie Daniels.”