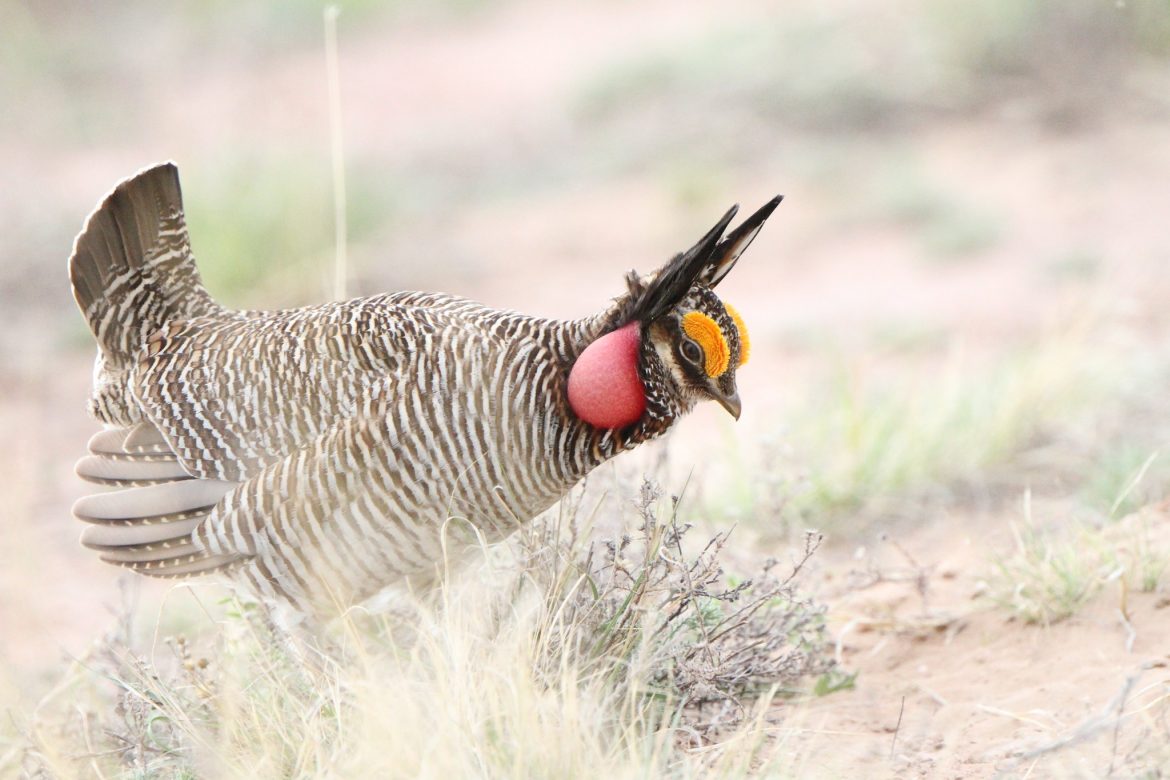 A male lesser prairie chicken bows during a mating dance near Roswell, NM.

The species was briefly listed as threatened under the Endangered Species Act in 2014, but after a series of lawsuits from industry groups, the bird’s listing is currently caught in bureaucratic limbo. Officials in southeastern New Mexico have pledged to keep fighting against attempts to protect it. And now, tweaks to the Endangered Species Act (ESA) could spell extinction for the bird.

In August, U.S. Fish and Wildlife Services announced a slate of revisions to the Endangered Species Act, including removing habitat automatic protections for threatened species, revising rules to make it harder to protect species that are threatened primarily by climate change, and performing economic impact analyses when deciding whether or not to list a species.

The rule changes drew rebuke from environmentalists and conservationists from across the country. Over a hundred members of Congress and 34 U.S. senators, including New Mexico Senators Tom Udall and Martin Heinrich, voiced opposition to the rule changes in letters to the Department of the Interior. The Attorneys General in ten states and the District of Columbia also expressed opposition to the rule changes, while two states — California and Massachusetts — have pledged to sue the administration over the finalized rules.

But the new regulations mean trouble for the lesser prairie chicken. While wildlife advocates petitioned the department to relist the species as threatened, a decision may not happen until May 2021.

Lesser prairie chickens, also known as Tympanuchus pallidicinctus, are not true chickens. They are members of a gamebird family, along with pheasants and turkeys, and were once so widespread across the central parts of the United States that the fowl was eaten as frequently as we eat chicken today.

The birds are most known for their elaborate mating rituals, which take place in early spring.The species gather for mating in leks, which are historic established breeding grounds for the birds. Birds within a given area will return to the same lek year after year to meet mates. During the prairie chicken dance, as it’s called, the males puff up their chests, fly into the air and make loud, booming calls, hoping to impress any passing female with their bright, colorful display and feats of agility and endurance, demonstrated while defending territories from other males.

“It’s a natural phenomenon,” said Noah Greenwald, endangered species director at the Center for Biological Diversity. “It all happens in these historic leks. These are historic places where they gather.”

They nest directly on the ground, hiding their eggs from predators in the tall grass and low-growing oak bushes that dot the range. And much like the dodo of the last century, changes brought by humans could cause their extinction.

There are three closely-related birds that make up the Tympanuchus genus. A fourth member of the genus, Tympanuchus cupido cupido or heath hen, was once widely distributed along the east coast. The bird was hunted to extinction by the 1930s, while its sibling, the Attwater’s prairie chicken, is now considered critically imperiled. The last wild population of that species now lives only in Texas, and as of 2018, there were only 12 left.

Conservationists are working hard to ensure the lesser prairie chicken doesn’t meet a similar fate. “The lesser prairie chicken has really undergone severe declines over the last century,” Greenwald said, adding that populations were has high as two million. “In recent years their population has been hovering around 40,000, range-wide. They’re just at a fraction of what they used to be.”

The main culprit? Habitat loss. “Their range has declined roughly by 90 percent,” Greenwald said. “That’s due to agriculture conversion, oil and gas production, and livestock grazing.”

Population plummets as habitat is disturbed

In New Mexico, grazing livestock and oil and gas development led to severe habitat fragmentation over the years, which caused the lesser prairie chickens’ populations to tumble by 95 percent.

Prairie chicken habitat is filled with tall grasses and shinnery oak, a brush that grows in the sandy soils in eastern New Mexico, the southern High Plains of Texas and western Oklahoma. Shinnery oak offers the prairie chickens a place to hide their nests and stay out of view of predators; but for ranchers, the brush is bad for business. Livestock, particularly cattle, can suffer and die from oak poisoning, so ranchers have killed off the shrubs in the past.

The prairie chicken’s habitat is also smack in the middle of the Permian Basin, currently the world’s most productive oil field. The infrastructure that comes along with oil and gas development has created new challenges for the small birds.

“Oil and gas development, the roads and the drill pads themselves, severely fragment the habitat,” Greenwald said. “They’re really sensitive to habitat development.”

Disturbance of their leks is another major issue the chickens are dealing with, spurred by the presence by oil and gas development.

“If there’s disturbance to those areas, it will upset their reproduction. If they come up and their lek is disturbed, they may not reproduce that year,” Greenwald said. “That’s how population declines happen.”

In the face of a severe population reduction, a group of five states that share prairie chicken range — New Mexico, Texas, Colorado, Kansas and Oklahoma — developed a voluntary conservation program with land owners, ranchers and oil and gas companies through the Western Association of Fish and Wildlife Agencies (WAFWA), a consortium of state fish and game agencies across the West.

The conservation program addresses declining prairie chicken numbers while balancing the needs of ranchers and oil and gas developers. In New Mexico, WAFWA conservation efforts have included private landowner programs that are administered by both state and federal agencies, including the U.S. Bureau of Land Management (BLM) and the USDA Natural Resources Conservation Service (NRCS).

Nonprofit conservation organizations have also helped. The Nature Conservancy acquired through land purchases some 28,000 acres in eastern New Mexico, named the Milnesand Prairie Preserve, to conserve lesser prairie chicken habitat. Despite these efforts, the lesser prairie chicken’s populations continued to decline. In New Mexico, there were just 637 birds left in 2014.

The federal government listed the lesser prairie chicken as threatened, in recognition of increased uncertainty around its future. At the time, Fish and Wildlife Services incorporated WAFWA’s conservation program into a special rule for the listing, essentially exempting participants in the WAFWA’s conservation program from further land-use restrictions. The Permian Basin Petroleum Association still challenged the listing, and in 2015, a federal judge in Texas ruled in favor of the industry association.

Fish and Wildlife Services officially removed the lesser prairie chicken from the federal Endangered and Threatened Wildlife list the following year. A petition was filed just a few months later to relist the species, and the department now has until May 25, 2021 to make a listing decision.

The new regulations are ‘hogwash’

Relisting the chicken under the new rules will prove challenging. First, there’s the fact that the bird’s habitat is also a booming oil and gas field, which may give regulators a strong enough economic reason to forgo relisting the bird.

“The Department of Interior tried to say, well, we’re just going to discuss the economic impact. It won’t influence our decision. That’s just hogwash,” Greenwald told NM Political Report. “The process is supposed to be shielded from that.”

“The oil and gas industry is certainly going to push that and try to use that as a reason for not listing the lesser prairie chicken,” Greenwald added.

Even if the chicken is relisted as threatened, the new rules mean it won’t necessarily have critical habitat designated for its conservation. And so regulators may opt to once again rely on the WAFWA voluntary conservation program to offer habitat for the species.

There is still some hope for the lesser prairie chicken, though. The Center for Biological Diversity, along with six other environmental groups, have sued the U.S. Department of the Interior over the rule changes; while a group of 20 U.S. Representatives and Senators have co-sponsored legislation that would repeal the new regulations.

“The Trump administration’s new regulations intentionally cripple the ESA – another giveaway to industry that puts near-term profits ahead of our long-term national interest,” U.S. Sen. Tom Udall, who is the Senate sponsor of the bill, said in a statement last week. “Stopping this rollback of the Endangered Species Act is critical to restoring the best tools we have for protecting our precious plants and wildlife.”