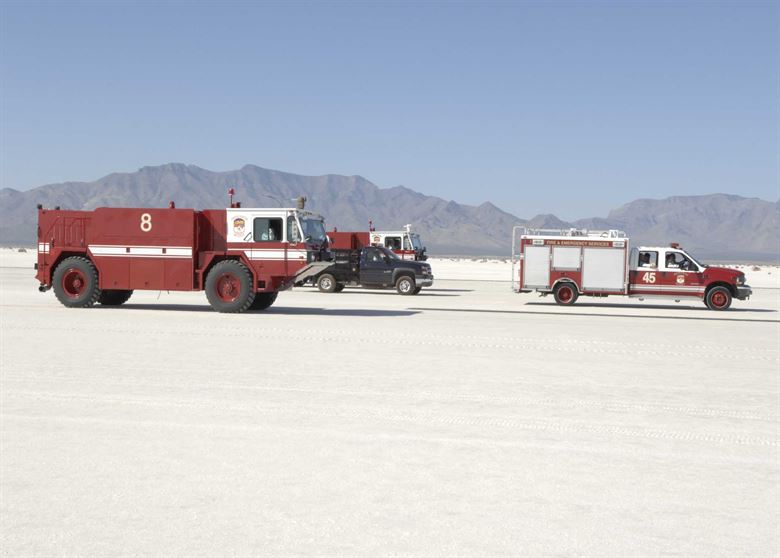 U.S. Army officials say no PFAS contamination has been detected at White Sands Missile Range, contradicting an article published by NM Political Report on September 24. That article was on this page, but is replaced with this post.

Our initial article incorrectly stated groundwater samples from White Sands Missile Range tested positive for PFNA, which belongs to the PFAS family of chemicals found in firefighting foam. PFAS, or per- and polyfluoroalkyl substances, are a class of human-made chemicals, and include perfluorooctanoic acid (PFOA), perfluorooctane sulfonate (PFOS), perfluorononanoic acid (PFNA), perfluorohexane sulfonic acid (PFHxS) and perfluorobutane sulfonic acid (PFBS). These chemicals have recently been found in groundwater and drinking water supplies at military installations across the country.

See all of NM Political Report’s coverage on PFAS contamination

Our article was based on a report released by the Environmental Working Group (EWG), a nonprofit research and advocacy organization that specializes in chemical contamination and drinking water issues.

EWG’s report lists over 100 new Army and National Guard bases across the country where PFAS chemicals have been detected in groundwater and drinking water supplies. The report was compiled from data the Department of Defense provided EWG through a Freedom of Information Act (FOIA) request. White Sands Missile Range was the only military facility in New Mexico that appeared in the report.

But Brian Knight, chief of the environmental division of the Directorate of Public Works at White Sands Missile Range, told NM Political Report the data had been misinterpreted.

“There is no PFNA in White Sands Missile Range drinking water,” Knight said.

A U.S. Department of Defense database of water sample testing from White Sands Missile Range shows PFNA was detected in one sample of water from White Sands Missile Range in 2016, but the sample was flagged as a false positive by the lab that did the testing, Knight said, because the contaminants appeared in the control water sample. A second test, which is also listed in the database, found no PFNA chemicals detected in the water samples.

“The PFAS levels reported in this article was contamination in the lab, not in White Sands Missile Range water,” Knight said. He added that all water testing at Army bases in the U.S. is now publicly available.

“The Army has been FOIA’d for all of its PFAS water sampling data. As part of that request, the Department of Defense has set up a website where they have all the possible water sampling data from all the Army installations loaded up on the website,” he said.

“The detailed testing results provided to the NM Political Report by U.S. Army officials at White Sands Missile Range and shared with EWG indicate the PFNA detection at 11 ppt was retested and reported as a non-detect. The retest information was not provided to EWG by the Army,” Andrews said.

He also pointed out that the new data indicates PFHxS was detected in one of the source water samples at an estimated 40 ppt, while all other testing was negative.

“These testing results are now three years old and laboratory capabilities to detect PFAS have significantly improved while at the same time concerns about low levels of PFAS in water have increased,” he said. “PFAS contamination is a nationwide crisis that will require increased water testing and cleanup of contaminated sites.”

PFAS chemicals are found in aqueous film-forming foam (AFFF), which was used as a fire suppressant by military firefighting units across the country. The foam was used in training exercises for firefighting units at Holloman Air Force Base in New Mexico, among other sites.

The Governor’s Office told NM Political Report earlier this week that no Army or National Guard bases in the state have firefighting units that would use the foam. But Knight said White Sands Missile Range did have the firefighting foam in its inventory.

“AFFF firefighting foam is used for aviation fires, like when a plane or a helicopter crashes, because it’s so good at putting out the aviation gas fires,” Knight said. “We don’t have any records showing we ever had to use it to put out a fire. We didn’t do those kinds of training exercises, we’ve never really had a truly active airfield.”

White Sands Missile Range removed its inventory of AFFF within the last year, as have other military facilities.

“The Army had not directed us to any PFAS sampling in 2016, but we went ahead and did it on our own,” Knight said. “We knew this was going to be an upcoming issue, the EPA had identified it as an emerging contaminant, we knew at some point it was going to get regulated, so we said, let’s go ahead test for it now, and make sure we don’t have an issue. And every test we got was a non-detect.”