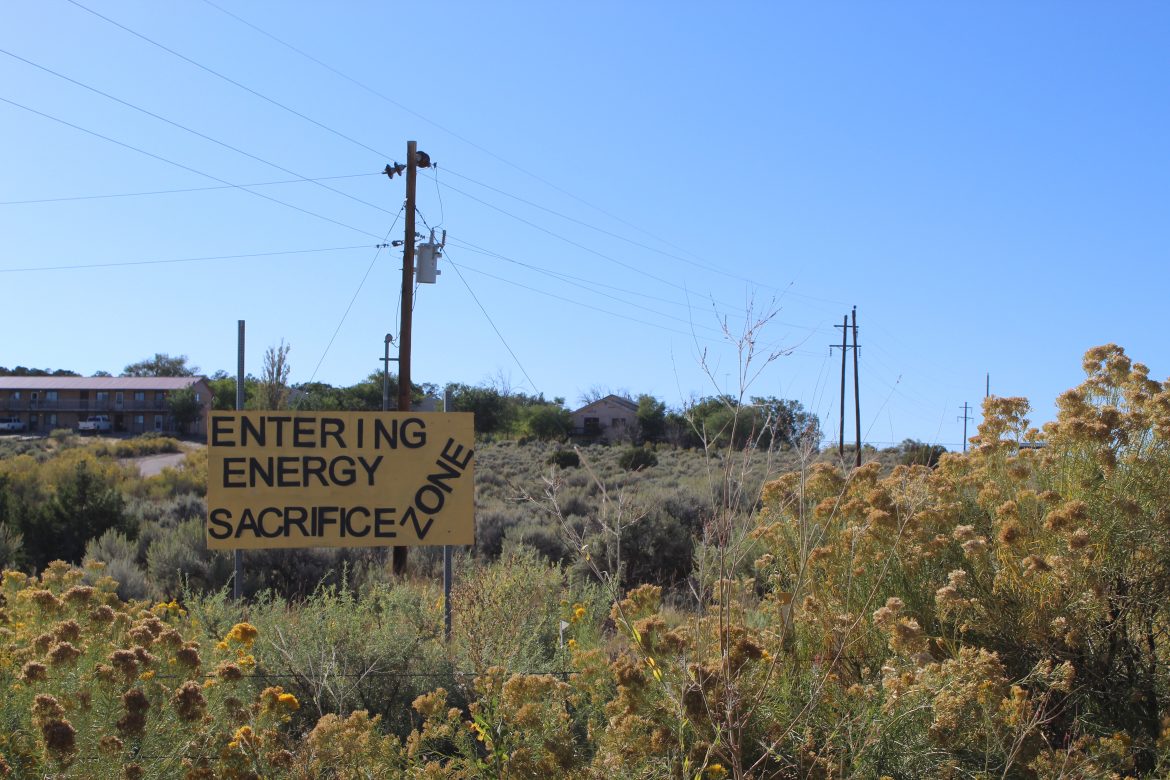 “Take a left here,” Daniel Tso says, gesturing with a hand towards an unmarked dirt road. There’s a small, hand-painted sign beside a tree that reads “Living Spring Church,” the only marker I’ve seen so far that differentiates this dirt road from the web of other unmarked roads we took to get here.

We’re headed to a group of fracking wells in what’s now called the “Greater Chaco landscape,” 25 million square miles of land outside of Counselor, New Mexico. Tso, who is a delegate on the Navajo Nation Council representing Counselor and the surrounding area, sits in the passenger seat of the car while my husband drives. I’m in the backseat, taking notes as he points out changes to the landscape caused by oil and gas development.

While the federal government has gone back and forth on leasing the land immediately surrounding the Chaco Canyon National Historical Park for oil and gas development, it has handed out leases to 91 percent of the BLM lands that make up the Greater Chaco region, which sits atop the Mancos Shale formation. Diné Citizens Against Ruining our Environment (Diné C.A.R.E.), the San Juan Citizens Alliance, WildEarth Guardians, Western Environmental Law Center and the Sierra Club have been fighting to stop further development of the area.

Tso suddenly tells my husband to pull over. A caravan of 10 cars pull up and park along the road behind us. Tso, along with Mario Atencio, an adjunct professor at UNM, and Samuel Sage, community service coordinator for the Counselor Chapter of the Navajo Nation, are leading a group of about 30 people on the semi-frequent “Fracking Reality Tour,” and we’ve just reached our first stop. Occupants — most from the Albuquerque area and affiliated with the group Indivisible Nob Hill — spill out of their vehicles and gather around the tour leaders, squinting against the mid-morning sun.

We’ve stumbled upon a fracking site whose presence seems to surprise Tso. There were camps here just a few weeks ago, he tells the group. The camps have been removed, revealing a plot of industrial-looking buildings and equipment. On the other side of the dirt road, a beautiful expanse of black and grey formations stretch out behind Tso as he speaks.

Tso, Atencio and Sage are working hard to raise awareness about the oil and gas development in the area through these tours. Tso estimates he’s taken hundreds of people through the area, all the while growing the Greater Chaco Coalition, which is now comprised of 110 conservation, environmental justice, indigenous and non-governmental organizations and groups.

“There are many sites related to the Chaco society in this area. That’s why we call it the Greater Chaco landscape,” Tso said. He added that many of the residents in the area trace their ancestry back to the Chaco civilization.

“Most people talk about protecting the ruins, but our focus is protecting the current living community and culture. That is a big aspect of what our work is: Helping people, making sure that we get a safe environment and making sure the community rights to clean water and clean air are part of the work,” he said.

Back on the dirt road, we’re driving through what Tso calls the “quilt” of land that makes up the Greater Chaco region. On the ground, a sweeping landscape of sagebrush, snakeweed and rock formations stretch as far as the eye can see.

On the right, we pass a group of feral horses grazing beside a water recycling facility. I ask Tso if it is for produced water, a hazardous, briney by-product of oil and gas extraction that often contains hydrocarbons, suspended solids and other chemicals. He nods. Cresting a hill, a small community of residents comes into view, just a few thousand feet away from the drilling pad we had just stopped at.

The quilt, as Tso refers to it, is a patchwork of private land, Navajo tribal trust land, BLM land, state land and allotments. The complexity of land ownership on this tract of land that runs along the south side of state highway 550, is confounding for visitors like myself.

“This is a school bus route,” Tso said. “BLM is the manager but they don’t really manage it.”

Tso comments frequently on the state of the roads in the area during the tour. He’s concerned about the state of the BLM-managed roads, which connect communities living on this stretch of land to the nearby towns. The school bus roads are lined on both sides by tall walls of clay, which turns the roads into irrigation ditches when it rains. Heavy truck traffic, especially when the clay is still wet, scar the roads further with deep wheel ruts.

But Tso points out that the industry-made roads that lead to the well pads are well-maintained and even have gravel.

As the tour continues, I come to see the roads as a reflection of the priorities set out by state and federal governments concerning the land and the people of Greater Chaco. There is virtually no infrastructure for the residents of the area — no road signs, no drainage ditches or culverts and no gravel on the roads. Standing in front of a huge water storage pond, identified by signs warning visitors that the water is not safe for drinking, Tso tells the group residents here have had a hard time getting electricity and running water.

The placement of the well pads is another visual reminder of priorities in the region. Tso tells the group that houses and public buildings are supposed to be located no closer than 1,000 feet from these fracking sites, but on the tour, we drive past well pads that are less than 400 feet from residences. Tso mentions a well pad with five wells across the street from the Counselor elementary school. “It had some of the highest readings in the area for hydrogen sulfide and a whole mess of other VOCs [volatile organic compounds].”

His group is now focusing on documenting and communicating the health impacts of oil and gas development in the region. Tso, Atencio and Sage helped collect on a 2017 citizen science report detailing locals’ complaints of headaches, nausea, burning eyes, and respiratory problems, and air quality issues as a result of the oil and gas exploration. Now, UNM is working a new two-year study that will focus on the mental and behavioral health impacts of oil and gas activity on the community members in the area.

“We want to look at it through Diné eyes, based on the fundamental aspects of Navajo culture,” Tso said. He’s hoping these studies will bring more concern and awareness to what’s happening in the Greater Chaco area.