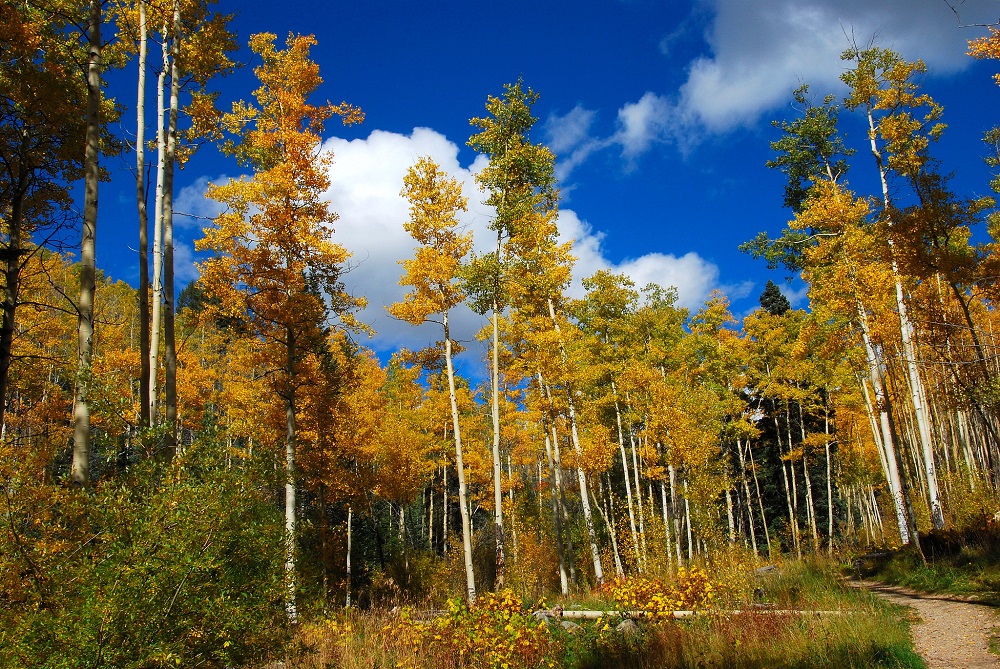 The U.S. Forest Service is in the middle of a major update to forest management plans. Four National Forests in New Mexico — the  Santa Fe, Carson, Cibola and Gila national forests — are now in various stages of the multi-year process to update management plans from the 1980s.

The Forest Service has the difficult task of balancing its management plan for a host of diverse uses, ranging from resource management, recreational use, wildlife conservation and wildfire management.

There has been a recent push by conservation groups to protect wildlife corridors and habitat connectivity by designating more portions of the National Forest as wilderness. But the discussion on how best to protect habitat has shone a light on another important component of forest management — one that’s a bit more controversial among residents: wildfire.

Earlier this summer, the Santa Fe National Forest released the Santa Fe Mountains Landscape Resiliency Project, a vegetation management project proposal designed to improve ecosystem resiliency to wildfire. The plan called for mechanical and hand-thinning treatments on up to 21,000 acres of land in what’s known as the Greater Santa Fe Fireshed.

At a time of mass extinction, global deforestation and climate change, the idea of timber removal and prescribed burns rub some residents the wrong way. The proposal received pushback from residents and Santa Fe city council members, who were concerned about how many trees would be removed and how prescribed burns may impact wildlife.

Similar sentiments have emerged in discussions around the proposed forest management plans. But Jennifer Cramer, who’s leading the revision process for the Santa Fe National Forest, says the two goals are not at odds with one another.

“The way that our draft plan addresses wildlife connectivity is through quality habitat for wildlife. The way we achieve that is through managing for vegetation types, which includes the appropriate amount of fire,” she told NM Political Report.

“There are parts of the forest that aren’t ideal right now, but using mechanical thinning and adding fire back, we’re going to improve wildlife habitat, and that will in turn improve wildlife connectivity,” she said.

In forests across much of the West, fire acts as a regulator. Natural cycles of dry seasons and lightning storms, for example, serve to keep forests in good shape by periodically burning available fuel.

For the past century, the Forest Service has engaged in a management style that was focused on fire suppression. That approach has led to huge swaths of Forest Service land becoming overgrown, with lots of low branches, dead bushes, felled trees and other vegetation. This turned what should be fire-resilient ecosystems into larger tinderboxes. Overgrown forests are more vulnerable to the type of mega-wildfires that have become commonplace across the West in the past decade. Climate change-driven changes in seasonal weather patterns have only exacerbated the issue.

“These systems were maintained by fire from lighting and in over half of the forest, it would have occurred at a pretty frequent interval,” Cramer said. “A lot of the forests we have now —  if it hasn’t had fire, and we introduce fire, that’s the kind of fire that can burn too hot, and could get bigger than we want it to be.”

To get the National Forests into better shape, the Forest Service must remove all the built-up debris and fire fuel. “That’s why we go in and do that timber extraction,” Cramer said. “We thin it out so that it can handle the fire in a safe way.”

The Santa Fe National Forest has proposed four different plans for forest management. Its preferred plan, referred to as alternative 2, incorporates both mechanical treatments for removing timber and using fire to get the forests back into healthy shape.

“That’s what we think is the most efficient way to get these vegetation systems back to where they need to be,” Cramer said.

The public, meanwhile, has been very interested in preserving habitat connectivity for wildlife, according to Karl Malcolm, regional wildlife ecologist for the southwestern region of U.S. Forest Service.

“The way the community has voiced a strong desire to see wildlife values highlighted in these forest plans is commendable,” Malcolm said during a presentation on the revision process last month in Taos. “One of the great things about our National Forest system is that those polygons on the landscape often serve as some of the largest and most-intact blocks of wildlife habitat that we have at our disposal,” he said.

Forest managers have incorporated that feedback into the draft plans, and have tried to accommodate more protections for wildlife and habitat while also managing for other land uses.

Groups like New Mexico Wilderness Alliance are advocating for plans that protect more habitat through designations such as “wilderness,” “recommended wilderness” or “inventoried roadless.” Such designations preserve habitat by limiting road construction and some forest management activities to protect the wildlife, according to New Mexico Wilderness Alliance attorney Logan Glasenapp.

“Of the alternatives, we definitely prefer the wilderness alternative,” Glasenapp said, referring to one of the Santa Fe National Forest draft plans that would protect more land for wildlife. “It meets more of what we think those lands actually provide in terms of value use,” he said.

But wilderness designations have important consequences for how the Forest Service can manage for fire. The Forest Service limits the use of mechanical and motorized equipment for tree thinning in wilderness areas, for example, which impacts how much fire fuel can be removed from those areas.

“Our treatments are done more with fire than mechanical thinning,” Cramer said, referring to the wilderness alternative. “There are some consequences for the landscape based on that, and there would be consequences for wildlife connectivity as well.”

More wilderness designations could also mean larger wildfires in the future, Cramer said. “There are greater risks of those fires,” she said. “If we can’t go in there and take out some of the fuel, then that fire is harder to control.”

Cramer added that the draft plans are all designed to protect wildlife habitat.

The Forest Service is still gathering comments from the public on its draft plans. Residents have until November 7 to submit their comments.