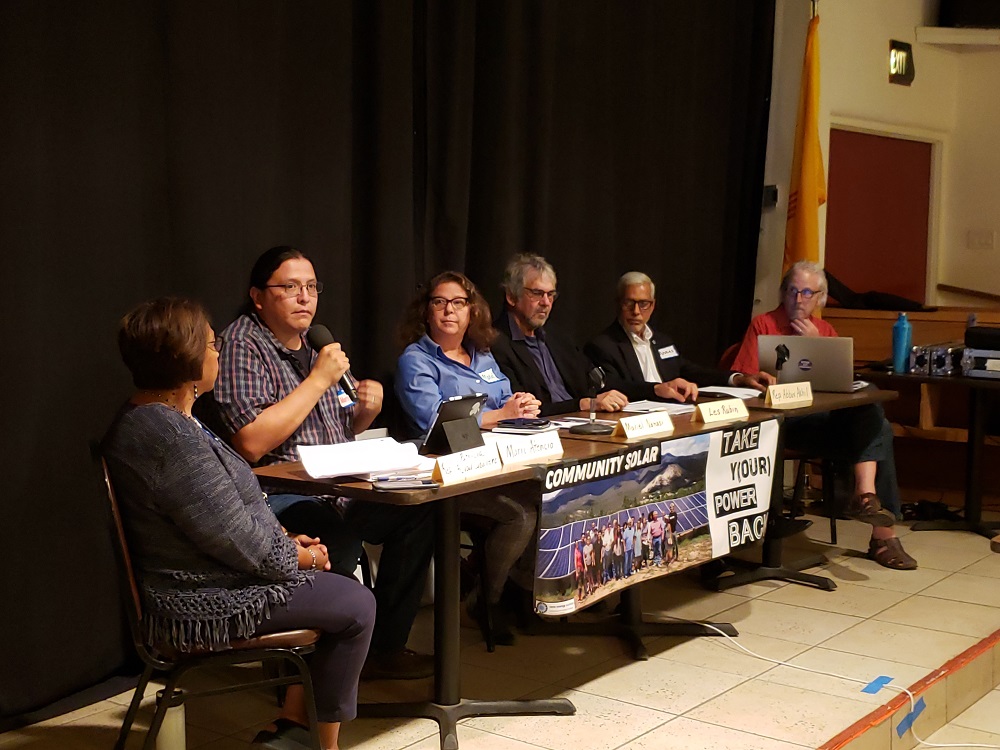 State Rep. Patricia Roybal Caballero would like to redefine energy production in New Mexico. Speaking on a panel about community solar, Caballero said she got the idea from the book Energy Democracy, which she uses as a textbook when she teaches.

“The basic premise is that we treat energy as commons,” the Albuquerque Democrat said, “and we change how we understand energy production, from consumption and profit being an end, to an energy transition providing services essential to life and quality of living for all community members.”

Roybal Caballero is one of a group of advocates and activists who gathered at the Center for Peace and Justice in Santa Fe on Tuesday to discuss the benefits of community solar and its place in a just transition to clean energy. The event was organized by the nonprofit advocacy group Retake Our Democracy.

“That’s an important premise, and one that we need to be grounded in,” she said. “It’s really important to talk about a just transition being community driven.”

Community solar refers to systems in which community members share local solar facilities and receive monetary credit on their utility bills for the power produced.

Roybal Caballero and with Rep. Andrea Romero, D-Santa Fe, sponsored a community solar bill during the last legislative session. The bill, which passed the House but didn’t clear the Senate’s conservation committee, would have authorized the state’s first community solar program, which would have enabled utility customers to participate in a solar energy project that would help lower their utility bills.

It would have also set New Mexico down a path heading towards decentralized power and away from the aggregated generation models that have dominated the U.S. power infrastructure.

“Community solar gives everyone the opportunity to experience affordable energy and most importantly, the experience and knowledge to contribute and participate in clean energy for the future,” Roybal Caballero said. “This is our choice, this our community, this is our democracy, we own it.”

Decentralized energy generation systems face both political and technical obstacles, but communities across the U.S., from Michigan to New Jersey, have begun to pursue community solar as a first step in this direction.

State Rep. Abbas Akhil, D-Albuquerque, who also spoke on the panel, pointed to political will as the main obstacle for the bill, after it failed this legislative session.

“The political concern was that it literally shifts the power from the centralized model that we have to more distributed, citizen-owned model. That upsets the [regulatory] compact that IOUs [investor-owned utilities] have, such as [Public Service of New Mexico] has with the [Public Regulation Commission],” Akhil said. “In a nutshell, that is the driver for the pushback. It upsets the model they’re used to.”

Centralized, investor-owned utility companies like PNM enjoy operating as a monopoly in areas of New Mexico, and are consequently regulated by the PRC to protect customers from unfair practices.

Mariel Nanasi, executive director of New Energy Economy, has been a vocal critic of PNM’s practices and how they’ve impacted New Mexico communities. Brandishing a large chart at the panel, Nanasi pointed to PNM earnings as indicative of the need for community-based energy generation systems.

Between 2008 and 2018, the median income for New Mexican residents living in PNM’s footprint decreased by 3.6 percent, while PNM electricity rates increased 63 percent, according to Nanasi. PNM’s CEO, Patricia Collawn, received a pay increase of 122 percent during that period, Nanasi said. The stock price for PNM grew 301 percent during that period, while the company’s profits rose 654 percent.

“Twenty percent of New Mexicans live below the poverty line. The CEO makes $5 million,” Nanasi said. “There is a direct line from the poorest people in New Mexico to the wealthiest corporation in New Mexico: PNM. That has to change.”

“We have to stand up, we need to take our power back. That’s what community solar is all about,” she said.

Community solar programs could offer new revenue opportunities for the state’s pueblos and tribal nations, who are often left out of such discussions, said Mario Atencio, a Legislative District Assistant at the Navajo Nation Council and adjunct professor at UNM.

“We have to be careful that renewable energy doesn’t exploit our communities like it did with coal,” Atencio said. He pointed to a solar array project slated for development near Pueblo Portado. The developer, Centaurus Renewable Energy, chose that location, Atencio was told, because it has some of the best solar resources in the country.

But the residents that live in that area aren’t able to reap any of the rewards. They have been essentially “locked out,” he said.

“It’s going to bypass all of our community, we’re going to see all that wealth flow out of the community.”

Many of the communities in the area lack basic infrastructure, such as paved roads, while at the same time, big oil and gas companies are reaping millions in revenue from exploration in the area.

“Since 1993, over $800 million in oil and gas wealth has come out of these regions. And these regions are some of the ‘poorest’ regions in New Mexico,” Atencio said. He added that $700 million worth of resources have been extracted through fracking since 2012. “We’re seeing that, of those monies, nothing comes back to local communities.”

Community solar systems would turn this power dynamic on its head, Nanasi said.

“When we talk about energy democracy, we’re talking about is all those profits gets repurposed back into your pockets, back into the community,” she said.

Getting on the Governor’s Call for 2020

Community solar advocates are now working to drum up support for putting the bill on the Governor’s call for the next legislative session. Paul Gibson, director and co-founder of Retake Our Democracy, urged audience members to send letters to their representatives about the issue.

The Youth United for Climate Crisis Action (YUCCA) group, a youth-led initiative that staged a series of events for the recent global Climate Strike, has also called for the bill to be considered in 2020.

NM Political Report reached out the Governor’s Office to see if Gov. Michelle Lujan Grisham plans to add to the agenda for the next legislative session.

“There’s no question that the governor supports the initiative of community solar,” said spokeswoman Nora Sackett in an email. She said the governor and the state’s Energy, Minerals and Natural Resources Department (EMNRD) have been meeting with advocates on this issue. But Sackett also said the Governor hasn’t yet fully decided what will be included in the next session and what won’t be.