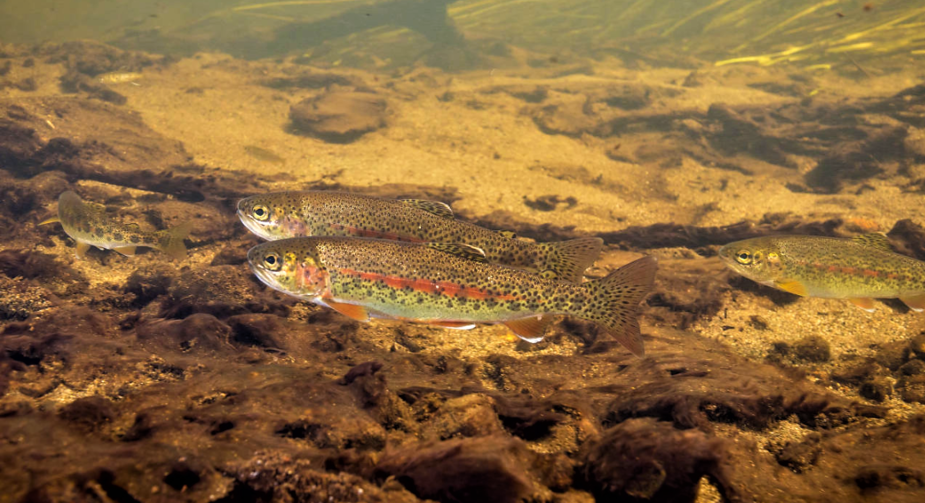 The rainbow trout has taken over much of the waterways of the West. Considered an angler’s favorite, the fish species is stocked frequently in waters across New Mexico and other western states to draw recreational fishers and the money the license fees generate.

“[New Mexico Department of] Game and Fish is between a rock and a hard place with rainbow trout,” said Doug Eib, a former employee of NMDGF and of the Surface Water Quality Bureau of the New Mexico Environment Department. “They depend on license sales to fund their activities, and people want to catch rainbow trout. It’s desirable for them to put rainbow trout out. But on the other hand, these fish are detrimental to the efforts to restore native species in a lot of cases. That’s the issue. That’s the conundrum that they’re in.”

A tale of two fishes

The Rio Grande cutthroat, which is New Mexico’s official state fish, at one time ranged throughout the cool, high elevation mountain waters of southern Colorado and the northern region of New Mexico.

“Historically, it occupied pretty much everything from Española north. I’ve heard they were as far west as Grants, and even down by Texas coming out of the Sacramento Mountains,” said Toner Mitchell, New Mexico water, habitat and public lands coordinator for the conservation nonprofit Trout Unlimited. “Now, this fish lives primarily in really small creeks.”

After decades of over-fishing, and the introduction of nonnative fish species such as rainbow trout and brown trout, cutthroat populations have declined significantly, while its range has dwindled to just 11 percent of what it once represented. Conservation groups, including the Center for Biological Diversity, petitioned the U.S. Fish and Wildlife Service to consider the Rio Grande Cutthroat for listing on the Endangered Species list for years. In 2008, after two lawsuits, the department agreed the species’ predicament warranted federal protection, but did not take action. After a third lawsuit, the department again considered the species for listing, but reversed course on its earlier decision and refused to list the species.

Meanwhile, populations of rainbow trout and brown trout, both of which were first introduced to the state’s waters in the late 19th century, have steadily spread across the state. The aggressive brown trout, which competes directly with cutthroat for habitat and is even known to eat them, is now considered a scourge to the native species. The rainbow trout, on the other hand, has a much more complex relationship to the cutthroat and the restoration of its habitat.

“Balance, that’s probably the key to what we’re trying to do,” Patten told NM Political Report. “The department is charged with providing recreational opportunities for anglers in New Mexico, and we’re also charged with managing and conserving native species.”

To meet demand for anglers, the department stocks rainbow trout in waterways across the state, multiple times throughout the year. Revenue generated from fishing licenses is then invested in habitat restoration and enhancement efforts to bolster the Rio Grande cutthroat populations.

“All of our areas where we stock rainbow trout are vetted pretty seriously for any sort of risk it may pose to a nearby or a resident population of Rio Grande cutthroat. If there’s any reasonable risk, we don’t stock those areas,” Patten said.

To reduce the risk of hybridization, the state began only stocking a special, sterile “triploid” rainbow trout that has three sets of chromosomes, rather than the normal two sets, and cannot hybridize with native cutthroats.

Still, Patten said, not all the rainbow trout in the state are sterile. Vestigial populations of viable rainbows have persisted and hybridized with native cutthroats. And private landowners can also introduce their own rainbow trout.

“There’s a pretty significant importation of rainbow trout by private landowners, who own say, a pond,” Patten said. “We do not require those fish to be triploid.”

For Mitchell, the use of triploid trout has rendered the rainbow trout a non-threatening nonnative species. But Eib, who previously served as a fish pathologist for NMDGF, said sterile trout is just a first step. “You’re still introducing a non-native fish into habitat of Rio Grande cutthroat trout,” he said. “Inherent with stocking comes a lot of other issues, like the spread of disease. Optimally, they would not be stocking anything that’s not native.”

“We do have an interest in and concern for native fish, and Rio Grande cutthroat trout,” he said. We’ve put in a couple of efforts to start that process.”

Restoring Rio Grande cutthroats to their native waters isn’t an easy process, Patten said. First, the section of stream needs to have manmade or natural barriers in place to protect the cutthroat from nonnative species. All of the invasive fish species then need to be removed from the water — accomplished either by poisoning the water or using electricity to stun the fish and manually remove them. Then, the Rio Grande cutthroats can be introduced.

The state relies on hatcheries to produce cutthroats that can then be reintroduced into the environment. The state’s entire stock of cutthroat fish is raised at the Seven Springs Hatchery in the Jemez Mountains. That hatchery “has been rearing nothing by Rio Grande cutthroat trout since about 2002,” Patten said.

Rio Grande cutthroats are much harder to raise in hatcheries than the popular rainbow trout, which further complicates the cutthroat’s restoration, Mitchell said.

“Not all trout is workable in a hatchery setting. Cutthroat trout get sensitive to light, sensitive to disease, water temperature, that sort of thing,” he said.

That’s another reason why there aren’t more cutthroat trout for stocking local waters. The rainbow trout is considered a domesticated species of fish: Rainbows have been raised in hatcheries for decades now, and are good at adapting to different environments. Hatcheries yield millions of eggs of rainbow trout each year, providing a low-cost fish for state departments across the West to use in stocking waters.

New Mexico is coordinating its efforts with the state of Colorado, where other genetically pure Rio Grande cutthroat populations exist. NMDGF is in the midst of a huge cutthroat restoration project in the Rio Costilla watershed in northern New Mexico. The project, considered one of the largest of its kind in the U.S., involves 25 lakes, more than 150 miles of streams, and the Costilla Reservoir. The department has restored more than 70 miles of streams in the area, and have introduced over 33,000 native fish since 2007. Patten said that project will wrap up in 2022.

All told, the state’s efforts have helped expand the cutthroat’s populations and stream range significantly over the past decade, Patten said. “I think our restoration efforts are working. We’ve definitely seen successes in some areas, and we’ve definitely had a few failures along the way,” he said.

But some believe the species would benefit from federal protections afforded under the Endangered Species Act. “They’re doing the best they can, with the resources they have, but it’s not enough,” Eib said. “Particularly with warming temperatures and reduced precipitation, the range isn’t getting expanded quickly enough.”

Conservation groups like the Center for Biological Diversity agree. After a fourth lawsuit filed against the U.S. Fish and Wildlife Services for refusing to list the Rio Grande cutthroat, a federal judge in September ruled the agency had to reconsider its decision.

“State-led efforts to protect the Rio Grande cutthroat trout are making a positive difference, but they are not sufficient,” Michael Robinson, senior conservation advocate at the Center for Biological Diversity, told NM Political Report in an email. He added that federal protections would ensure the cutthroat’s reintroduction would not be subject to the political winds of the state.

“Whereas state-led efforts — and not just in reintroducing populations but also in protecting habitat — in both New Mexico and Colorado may depend in part on the political inclinations of the governors, the Endangered Species Act is enforceable no matter who is president much less who are the governors.”