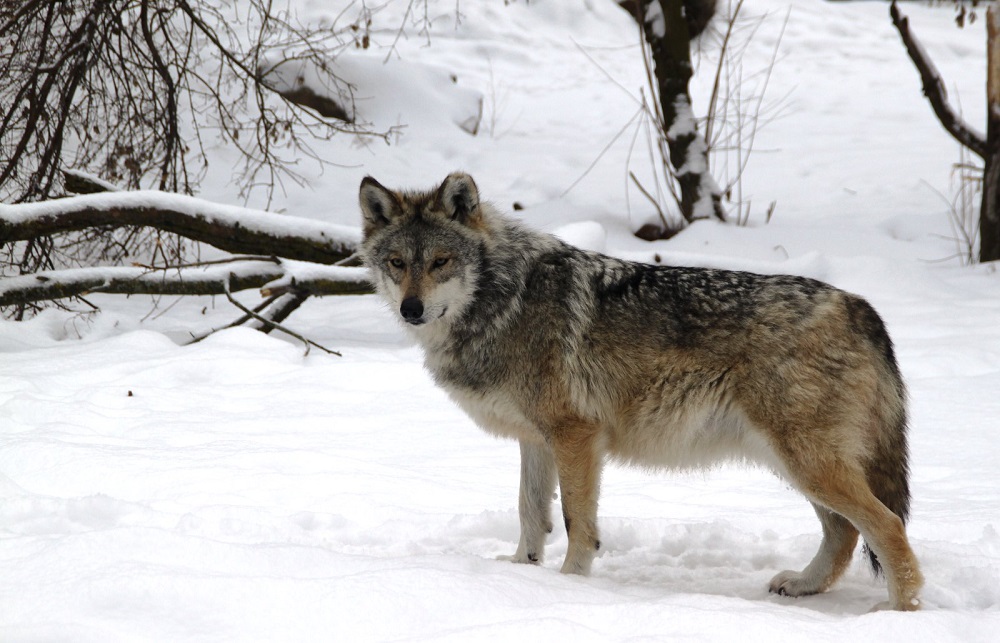 A lone male wolf loped across the sandy landscape of the Chihuahuan Desert under a waning January moon in 2017, heading north. The male, known as M1425, was a member of a small population of endangered Mexican gray wolves reintroduced into Mexico in 2012.

The wolf was doing exactly what male wolves should be doing: exploring the landscape in search of new habitat, food sources and possibly even a mate. M1425 spent two nights exploring the new range before turning south and heading back to familiar territory.

The journey north, which took the wolf across the U.S.-Mexico border, was encouraging to researchers who tracked the animal’s peregrinations by GPS collar. Finding suitable mates has become a chief concern in the conservation of Mexican gray wolves, whose recovery has been stymied in part by lack of genetic diversity.

The species once roamed across much of northern Mexico and the southwestern United States, before the animals were brought to the brink of extinction by a federal program designed to exterminate the species. In 1976, the U.S. Fish and Wildlife Service officially added the Mexican Gray Wolf to the Endangered Species List and began recovery efforts for the apex predator, in collaboration with the government of Mexico.

Today, just two populations of Mexican gray wolves exist in the world. The U.S. population, which was re-introduced to portions of western New Mexico and eastern Arizona in 1998, is comprised of roughly 131 individuals. The Mexico population is much smaller, made up of just 30 individuals.

Genetic diversity is a major challenge to recovery for a species with such a small surviving gene pool. There are no other Mexican gray wolves alive, anywhere, as far as researchers know, said Kevin Bixby, executive director of the Southwest Environmental Center.

“Both populations have a very low degree of genetic diversity, because they come from a very small founding population,” Bixby said during a recent tour of the U.S.-Mexico border wall construction near Santa Teresa, New Mexico.

That is why M1425’s trip across the border was so exciting. If the two wild populations of Mexican gray wolves can find and mate with each other, the exchange of genetic material could boost recovery efforts for both populations.

But M1425 won’t be able to make that trip again. The area where the male first crossed the border into the U.S. is now walled off, while construction of the border wall is currently underway in the area where he made his return to Mexican soil. With President Donald Trump’s border wall stretching across much of the Chihuahuan Desert in the U.S., the prospects of the two populations interacting with one another are slipping away.

A bottleneck in genetic diversity

Genetic diversity is crucial for the health of any species population, but it becomes especially important for threatened or endangered species, when the size of the remaining populations are small. Inbreeding, which occurs when there are too few mating individuals within a population, can increase the likelihood of genetic disorders or susceptibility to disease that can threaten the survival of the species.

While the Mexican gray wolf has been in recovery for over twenty years now in the U.S., progress has been slow and unsteady. When the U.S. Fish and Wildlife Service began recovery efforts for the wolf, there were only seven surviving individuals. All existing Mexican gray wolves are descendants from these initial seven.

Michael Robinson, senior conservation advocate at the Center for Biological Diversity, says inbreeding is now the primary threat to the species, due largely to mistakes made in recovery efforts.

“Inbreeding has worsened because of mismanagement at the U.S. wild population by the U.S. Fish and Wildlife service in the almost 22 years since reintroduction,” Robinson told NM Political Report.

The courts have, so far, agreed. Fish and Wildlife Service faced multiple lawsuits over its handling of the species’ recovery. In 2014, the agency was forced to revise its initial 1998 reintroduction rule after failing to meet its own demographic projections. The new rule, adopted in 2015, was designed to increase genetic diversity, but genetic diversity actually declined in the four years since, according to the department.

The Center for Biological Diversity is one of 48 organizations and 32 scientists who recently called for a “reversal of the Service’s management philosophy and practices that it has followed since 1998,” in a letter sent to the department.

“The rule that they have been managing under, which reflects their philosophy, has been dictated by political pressure and kowtowing to a narrow set of concerns rather than following the best available science and what experts say will help to actually recovery these wolves,” said Chris Smith, southern Rockies wildlife advocate for WildEarth Guardians, which was involved in litigation against the department and a signee of the letter. “These wolves are so inbred that they’re really susceptible to being wiped out.”

Both Robinson and Smith agree that the department needs to release more genetically diverse captive wolves into the wild in order to prevent more inbreeding.

“The best way to combat that genetic bottleneck is by releasing adult wolves — preferably even in bonded pairs, and even more preferably, with pups,” Smith said. “Because then you know you’re injecting new genetic material into the population, and you know that material is going to spread and diversify the rest of the gene [pool]. ”

Fourteen new wolves were added to the U.S. population in 2018, a record year for the conservation effort, and a huge increase over 2017, which saw just one new wolf born. But 2018 was also a record year for wolf killings, pointing to further complications in the species’ recovery.

Ranchers and wolves have always been at odds with one another. It doesn’t help that the Mexican gray wolf’s habitat in New Mexico butts up against ranching communities in the southwestern part of the state and public lands that are often used for grazing.

Smith noted that even protected wolves are removed from the wild for preying on livestock.

“They are removed for depredation frequently, without a lot of requirements both on the part of ranchers to take proactive steps to minimize depredation; and sometimes without thorough and convincing analysis of carcasses to prove that it’s actually wolves that are killing these animals,” Smith said.

Wildlife Services, which sits within the U.S. Department of Agriculture Animal and Plant Health Inspection Service (APHIS), provides a form of pest control to ranchers and livestock handlers for removing predators like coyotes and wolves. The agency is legally allowed to use lethal force to remove endangered Mexican gray wolves, but a spokesperson for the Fish and Wildlife Service said only one Mexican gray wolf has been killed in the last two years by Wildlife Services.

Smith thinks a lot of the wolf killings in 2018 were illegal. “Frankly I don’t think the agency does enough to prevent that and investigate it,” he said.

WildEarth Guardians, the Center for Biological Diversity and other organizations and researchers have proposed a slew of management practices that they believe could help the species recovery. The proposed practices include releasing more wolves from captivity, creating more stringent requirements around when and why wolves can be removed from the wild, and ensuring ranchers take more precautions in prevent livestock predation.

“This is an opportunity for the Fish and Wildlife Service to do right by the lobo and create a path toward actual recovery,” Smith said in a statement. “We have put forward the components of a management rule that would protect this at-risk population. Hopefully the agency honors its duty.”

“To maintain genetic diversity, which is important to maintain the species, there needs to be genetic connection between those two re-introduced populations,” Bixby said. “There needs to be breeding. So, they need to be able to find each other, and that means being able to move across the landscape.”

“The wall will prevent that from happening,” he added.

The border wall now being constructed in southern New Mexico poses significant challenges to many species of animals who call the Chihuahuan Desert home, agreed Dr. Carlos Lopez Gonzalez, a research professor at the Universidad Autonoma de Queretaro in Mexico. Lopez Gonzalez has been involved in the recovery effort of the Mexico population of the species.

“The presence of the border wall will for sure limit the movement of this and most likely any other large vertebrate in the American southwest and northwest Mexico,” Gonzalez told NM Political Report in an email. “Those areas that currently do not have a border barrier (either vehicular or pedestrian) are the sites most traveled by humans, consequently even now, there is limited connectivity.”

Gonzalez noted that it has been rare for Mexican gray wolves to move back and forth across the border during the recovery effort. But to Robinson, connectivity between the two populations will prove vital for the species’ chances of long-term recovery.

“That’s looking at a moment in time, when both the U.S. and Mexico wolf populations are quite small,” he said. “The lesson to be learned here is not necessarily what’s happening now, but what’s going to be required for recovery.”