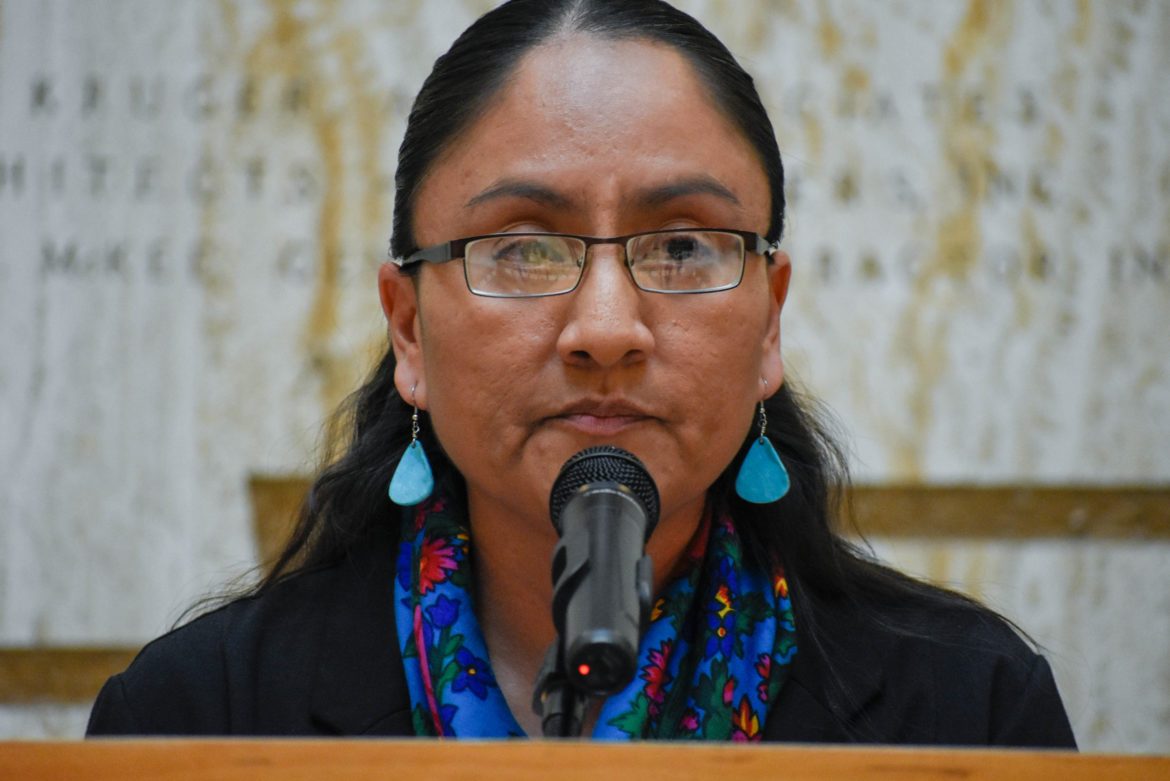 Wilhelmina Yazzie speaks at the Roundhouse at the start of the 2019 legislative session.

The state didn’t spend enough, and it still doesn’t have a plan. That, in essence, is what attorneys in the state’s landmark Martinez/Yazzie education lawsuit argue in a legal motion that seeks concrete steps to guarantee Native Americans, English learners, disabled and low-income students a sufficient education.

Wilhelmina Yazzie, lead plaintiff in the case, has two high schoolers in the Gallup McKinley district. She said even after the state pumped nearly half a billion into the public schools, her sons aren’t seeing it in the classroom. There are no new textbooks or computers, teachers are still providing resources out of pocket and classes that reflects their Navajo culture are still lacking.

“I know a lot of our teachers, they do want to help our children. They do want to be there. It’s just the lack of resources,” she said in an interview.

The New Mexico Center on Law and Poverty, which represents the Yazzie plaintiffs in the education funding lawsuit, filed the motion this afternoon. It said that despite a cash infusion of $446 million to public schools this year, the 2019 Legislature did not comply with the court order of District Judge Sarah Singleton last year to take immediate measures ensuring at-risk students have a constitutionally acceptable education.

Many school districts still don’t have the means to provide basic instructional materials and technology, reading specialists, smaller class sizes and social services, or to offer PreK, afterschool and summer programs to all who needed it, the Center claims.

The Center’s motion asks the court to order the state to create a state-wide plan within 60 days and for the state to direct resources for at-risk students by March 15, 2020.

Gail Evans, the Center’s lead attorney in the lawsuit, said the group wants the Public Education Department and Legislature to work together to figure out what programs are needed to make sure at-risk students are college and career ready, figure out how much it’s going to cost, and outline how they will make it happen.

The time for patience is over, she said.

“It’s a comprehensive ruling from the court, and we need a comprehensive response from the state on how they are going to address these four groups of students needs. And we haven’t seen that response,” she said.

The Mexican American Legal Defense and Education Fund, which represents the Martinez plaintiffs also filed a motion today saying it believes the state is not complying with the court’s decision and seeking a timeline for action.

In response to the finding, Education Secretary-designate Ryan Stewart pointed to Gov. Michelle Lujan Grisham and Legislature’s huge boost in funding, saying it was focused on closing the opportunity gap between at-risk students and their peers. Increases in teacher pay have already shown results, with recent data showing about a 13 percent decrease in teacher vacancies across the state, a PED spokeswoman said.

“We recognize the urgency of making sure all students receive the education they deserve. We also realize the important work started by Gov. Lujan Grisham and the Legislature is already making a difference. This is only the beginning of the moonshot for education, and we will continue to advocate for increased funding for education for all students as we prepare for the upcoming legislative session,” Stewart said in a statement.

Getting ready for session

The motion comes as state lawmakers have been gathering to develop a state budget proposal and education legislation for the upcoming 30-day budget session in January.

Sue Cleveland, superintendent of Rio Rancho Public Schools, a district represented in the lawsuit, gave an update last week to members of the Legislative Education Study Committee that summarized problems districts across the state are reporting. (See KUNM’s livestream of the meeting here.)

Her own district still has hundreds of children on waiting lists for its PreK program. She and other districts had trouble implementing extended learning programs like afterschool and K-5 Plus, and were looking for more flexibility and advanced notice from the Public Education Department. And Cleveland said the state should broaden the kinds of counselors it hires to meet the social and emotional needs of students. Rio Rancho has hired a counselor for all its schools, but some counselors have to serve up to 1,000 students in a large elementary.

“You can’t meet the needs of 1,000 children with one counselor,” she told lawmakers.

While the bulk of 2019’s funding increase went to teacher salaries, Cleveland said it was needed and wages should probably be revisited this year because school districts have been losing teachers to neighboring states over noncompetitive salaries.

“We’re not done,” Cleveland said. “There has been great progress and we thank you, but there is just so much that needs to be done before we meet the needs of every child in New Mexico.”

For Wilhelmina Yazzie, who still goes to all her kids’ parent-teacher conference and worries that the teachers and principals are irritated by all her questions, making education better for all children in New Mexico is going to take vigilance.