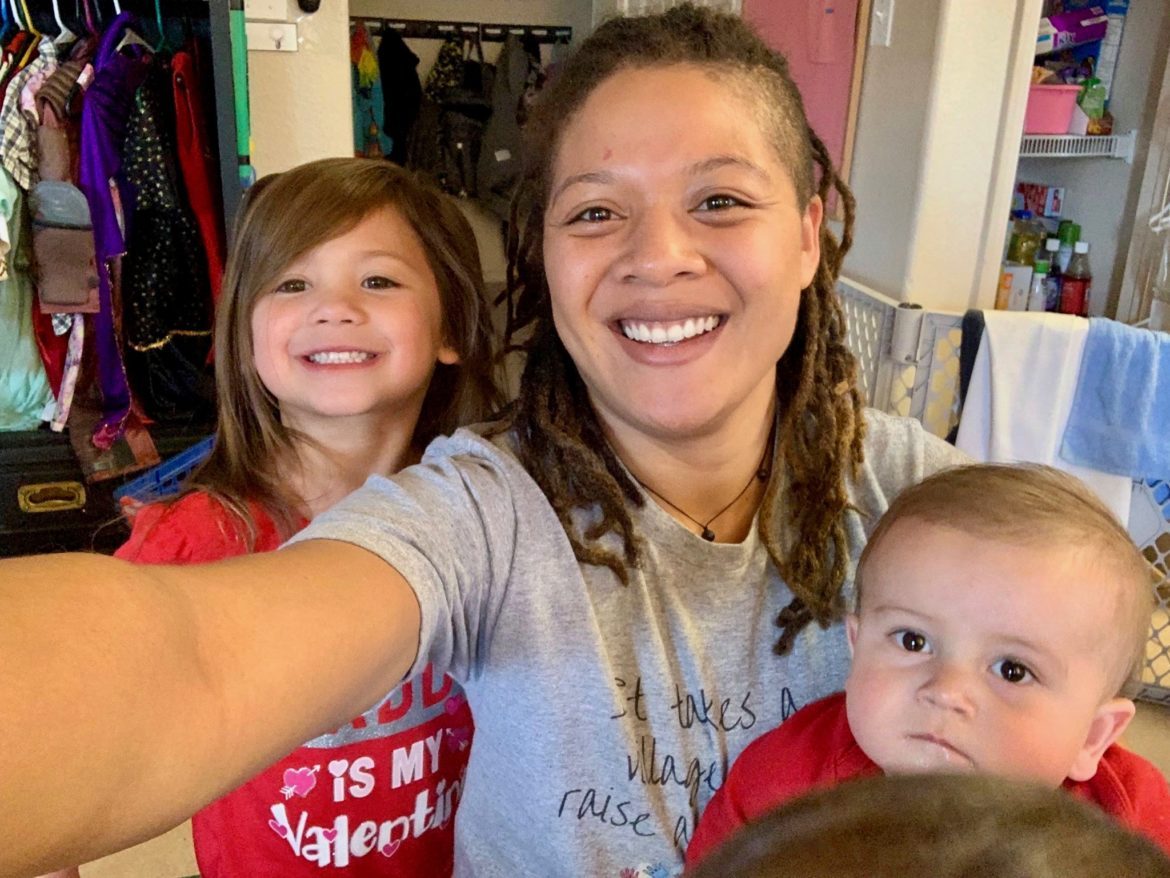 Michelle Masiwemai takes a selfie with some of the children she cared for at Best of the Southwest day care center in Las Cruces.

Michelle Masiwemai — like many early childhood workers — is a mom. But her job at a Las Cruces home-based child care center didn’t pay enough to support her 8-year-old daughter, who lives with her parents in Guam while she and her fiancé try to get on firmer financial footing.

The daughter of two educators, including a kindergarten teacher who now teaches early childhood education at the college level, Masiwemai was raised in a family of 10 children.

“My whole life I’ve been around children. I was a babysitter. I was the little girl who took care of all the little kids at the parties and planned all the activities. That was me,” she said.

Masiwemai has a bachelor’s degree in early education and speaks three languages. She exudes warmth and nurturing when reading to toddlers, sounding out words and getting down on the floor to interact with them.

She’s exactly the type of worker New Mexico wants educating and caring for its youngest children.

But low wages ensure that child care can’t be a long-term career path if she wants to reunite with her daughter and add to her family.

Masiwemai’s pay dilemma is nearly universal here and throughout the United States: A child care worker who loves children but can’t make ends meet on the low wages.

“One thing we do have in this state is a shortage of highly qualified early childhood workers, and the reason we have that shortage is we’re not willing to pay,” said Kelly O’Donnell, a research assistant professor in the School of Public Administration at the University of New Mexico. “You can’t take care of an infant like you flip burgers, right? But we pay them the same amount.”

Those low wages stand in the way of New Mexico’s ambitious goals for universal PreK and affordable, high quality childcare. A high priority for state officials is to raise wages while not making child care centers go bust or asking parents to shoulder more of the costs. To that end, the Children Youth and Families Department has launched a pilot program that puts more money in workers’ paychecks, and hopes the results will persuade state lawmakers to take the program statewide in 2020.

Licensed child care is expensive for parents and tough to make profitable for private child care center operators. Low wages are built into the business model, as are hundreds of millions of dollars in annual subsidies from New Mexico taxpayers.

The median wage for New Mexico child care workers was $9.49 an hour in 2018, according to the state’s Department of Workforce Solutions.

Staff turnover is a major dilemma for operators. Workers who do stick around and receive a degree in early childhood education are often snapped up by public schools, which offer pay that’s nearly three times higher with benefits and summers off.

Paying more is difficult for childcare centers, which cobble together revenue to make their businesses viable.Parents — and even many lawmakers — may not know how heavily public dollars support child care providers. It’s so large that the industry might best be described as quasi-public. In 2018,  the state paid an average of $550 a month for 21,300 children, for a total of about $116 million in child care assistance, according to the Legislative Finance Committee. The state is spending significantly more now, projecting $149 million in 2020.

“Because of our high rates of poverty, government payments are the primary driver of revenue and of the business structure,” said O’Donnell.  “This not a competitive marketplace at all.”

Take Valeria Holloway, for instance, who runs Best of the Southwest Daycare out of her home in Las Cruces and hired Masewemai to help care for infants and toddlers.

Holloway got into the home childcare business nearly 20 years ago in Virginia, where most of her clients paid out of pocket. Here in New Mexico, though, the state pays for 10 of the 14 children she cares for, through childcare assistance payments based on family income.

Augmenting those childcare assistance dollars are other sources of public money and programs.

“Everything that New Mexico has offered, I’ve got,” she said.

Because Masiwemai has a bachelor’s degree in early education, Holloway applied for a state wage incentive that paid her $2 more per hour.

Holloway won a state grant that pays for curriculum planning time. New Mexico also provided her a licensing and early education consultant and it runs mandated training for her workers. Best of the Southwest, like licensed childcare providers nationwide, also gets federal food assistance.

The state also pumped $31.5 million in PreK money into private centers in 2019.

Those are coveted dollars because providing preschool and care to 3- and 4-year olds is more profitable.  That age group requires fewer workers than caring for infants and toddlers. For that reason, a 2019 legislative proposal to move all 4-year-olds to public preschools caused a panic among private childcare providers who also teach preschool because those children help keep their businesses viable.

Despite public support and the low wage structure, last year Holloway earned just $33,723 for providing care 11 hours a day, six days a week — and that was after earning the highest, 5-star rating that comes with higher reimbursement rates.

“You can’t take care of an infant like you flip burgers, right? But we pay them the same amount.”

Kelly O’Donnell, a research assistant professor in the School of Public Administration at the University of New Mexico

Other childcare centers benefit from nonprofit — read tax-free — status. Some are housed in churches, universities and businesses where they might get free or low-cost rent and utilities, health benefits and more to minimize expenses.

Child care centers that do pay their workers on par with public school teachers must make up the difference. One prominent nonprofit New Mexico provider closed the gap through charitable donations.

Katherine Freeman is CEO of the United Way of Santa Fe, which runs a five-star NM PreK and child care center.

Freeman pays her preschool teachers the same as teachers at the local elementary school and offers a generous health insurance package. But to make the math work, United Way kicks in about $600,000 a year.

Higher wages are needed not only for basic fairness, but also to build the childcare workforce, said Freeman. The state in June contracted with the policy arm of the UWSF to help put together a strategic plan for the new Early Childhood Education and Care Department.

“There would need to be more money in the system, and it needs to be figured out within the economic ability of a state like this,” Freeman said.

Masiwemai and her fiancé, Rodney Wince, came to Las Cruces from an international school in China where they met and where she taught Kindergarten. They were looking for better economic opportunities and a place to raise Masiwemai’s daughter and start a family together closer to his own family in Mississippi.

Wince got a job as a supervisor at a local call center. Masiwemai found the job at Best of the Southwest. A 28-year-old with an athletic build, Masiwemai was working toward a personal fitness certificate, and enjoys singing and writing music. They are passions she incorporated into her interactions with children.

“It’s such an emotional job. Because these kids end up becoming our family,” Masiwemai said. “I treat them as if they were my own. I think parents would appreciate that. For me personally, I do believe that what we do is definitely worth a lot more than we get paid.”

But even after earning Las Cruces’ minimum wage of $10.10, plus the $2 per hour education incentive pay from the state, and after factoring in Wince’s paycheck, the couple couldn’t afford health care and was burning through savings built up in China. They qualified for Medicaid and food stamps.

Masiwemai’s plight was similar to half of all childcare workers who rely on government assistance programs — like Medicaid, food stamps, the Earned Income Tax Credit and New Mexico’s version of it, the Working Families Tax Credit.

When the state passed a law earlier this year that will raise the statewide minimum wage to $12 an hour by 2022, alarm bells went off across the industry at the effect the raise will have on the cost of running a childcare center.

Grappling with simply raising the wages of entry-level workers will be hard enough. But providers say they will need to raise wages not just for new workers, but across the board. That’s because as the minimum wage goes up, it will put new workers close to or at the same pay level as more experienced workers. http://nmindepth.com/2019/11/07/what-is-high-quality-childcare/

To fairly compensate and retain workers with advanced skills, they’ll need to raise their wages too, which will be difficult given thin profit margins.

The dilemma has caught the state’s attention.

Las Cruces’ new $10.10 minimum wage made the city a good choice for a state pilot program. Designed to put more money into child-care workers’ paychecks without raising costs for parents who don’t qualify for childcare assistance, the goal is two-fold: to lessen the minimum wage increase’s impact on business owners and to increase staff retention by making salaries more attractive.

The state is using wage supplements rather than raising the amount they pay centers  per child because it doesn’t want to make childcare more expensive for families that make too much to qualify for childcare assistance. Because so many children in New Mexico are subsidized, centers often use the state childcare assistance rate as the basis for what they charge all families.

“We’re really careful when we raise rates,” said Alejandra Rebolledo Rea, director of Early Childhood Services for CYFD. “It can be a financial burden.”

The pilot went into effect in Las Cruces this summer and is only available to providers that accept child care assistance. A second test is being launched in southeast New Mexico, Rebolledo Rea said, where wages are higher and child care centers face stiff competition for workers because of the oil and gas industry.

The department plans to request $19 million from the Legislature in 2020 to take the program statewide.

The help comes too late for Masiwemai, though.

She and her fiancé left Las Cruces for Austin, Texas, at the end of the summer because they couldn’t make it on their wages here. After seeking work in early childhood there and finding the same low pay, Masiwemai decided to leave the field.

“I feel bad because I really like working with kids,” she said. “But the thing is I also have bills to pay.”

So she took a full-time job as a bartender. It gives her time during the day to work on a music career, another dream of hers.

And her wages have tripled, Masiwemai said.