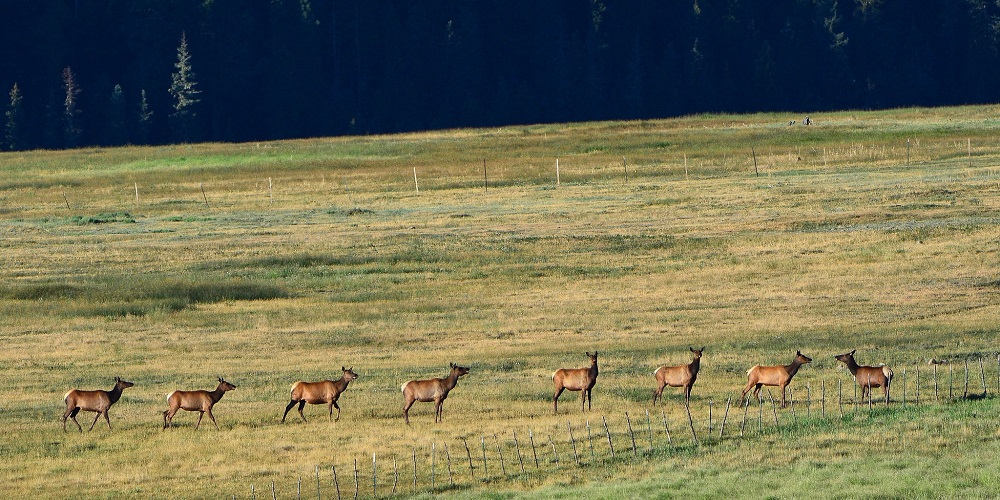 A group of elk between fences in Valles Caldera. Fencing, roads, bridges and other human structures have fragmented habitat across the U.S.

U.S. Senator Tom Udall introduced legislation this week to support the conservation of wildlife corridors on tribal lands in the United States.

The Tribal Wildlife Corridors Act of 2019 would require federal entities such as the Forest Service and the Department of the Interior to coordinate with indigenous nations on land management and wildlife corridor conservation. The bill is supported by U.S. Reps. Ben Ray Luján and Deb Haaland, along with seven Democratic U.S. Senators.

The legacy of human activity on the planet has led to severe habitat loss and habitat fragmentation for millions of species. A recent report on biodiversity published by the United Nations found that activities such as farming, logging, fishing, poaching and mining have altered the planet’s ecosystems at a rate “unprecedented in human history.”

Wildlife corridors are stretches of land that are not fragmented by human-made structures such as roads, fencing, or bridges and where wildlife can move freely. These corridors are becoming increasingly rare in certain areas in the U.S. and around the globe.

“Our planet currently faces a mass extinction crisis,” Udall said in a statement. “Wildlife corridors, as effective tools for restoring native species populations, are the first step in addressing this crisis.”

“This legislation, developed in consultation with tribes, is designed to honor the federal trust responsibility to Indian tribes by supporting tribes’ work to coordinate wildlife management strategies with their federal partners across jurisdictional boundaries,” Udall said.

U.S. Rep. Ruben Gallego, D-Arizona, the House sponsor of the bill, said in a statement it was “past time to ensure that tribes have the resources they need to protect wildlife migration and habitats on tribal land.”

“Indigenous communities have long led by example when it comes to responsible and effective stewardship of our land and wildlife,” Gallego said.

“The movement of wildlife contributes to the resilience of our air, land and water, but right now we’re facing growing problems protecting their natural migration patterns,” said Haaland, who co-chairs of the Congressional Native American Caucus.

“By supporting tribes’ capabilities to protect wildlife and their migration corridors, which is part of our traditional way of life, we recognize their important role in wildlife management and also preserve vital wildlife habitats,” Haaland said.