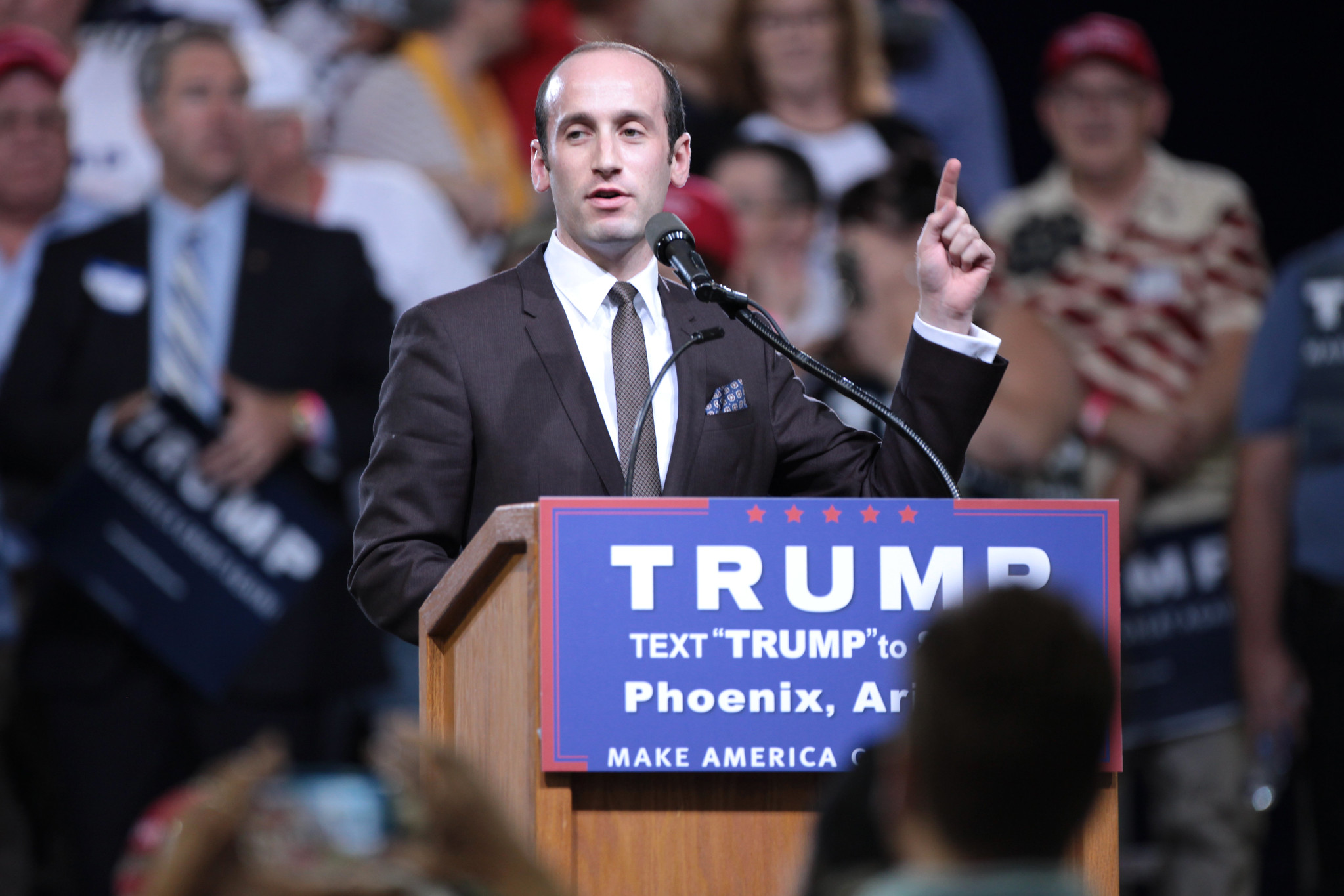 Stephen Miller speaking with supporters of Donald Trump at a rally at Veterans Memorial Coliseum at the Arizona State Fairgrounds in Phoenix, Arizona. (Flickr/cc)

Two of New Mexico’s U.S. Representatives signed onto a letter calling on President Donald Trump to remove White House Senior Advisor Stephen Miller from the administration in light of emails revealed by the Southern Policy Law Center in recent weeks.

Reps. Ben Ray Luján and Deb Haaland signed the letter along with over 100 other members of Congress, all Democrats. Rep. Don Beyer, D-Virginia, took the lead on writing the letter.

The emails, provided to the SPLC by Katie McHugh, a former Breitbart reporter who has since renounced her far-right political views, show Miller shared links from far-right, white nationalist websites, suggested Breitbart aggregate a story from the fringe website American Renaissance and expressed anger at removal of the Confederate flag after a shooting by a white supremacist.

Further emails showed how Miller shaped the political coverage from Breitbart ahead of the 2016 election. The far-right website was an ally of Donald Trump and its former executive chairman, Steve Bannon, worked as the Chief Strategist in Trump’s White House until he resigned in 2017.

The revelations from Miller’s emails prompted the calls for him to resign.

The congressman cited hate crime statistics that show increased attacks on Latinos and called Miller the “architect of the Muslim ban.”

“Every hateful policy that has come out that is racist, that is filled with white nationalism is coming from Stephen Miller,” he said. “He’s got to go.”

“No community should have to face violence based in hate, but the rhetoric coming from the White House emboldens people to commit violence against our communities based on who they are,” Haaland said in a statement. “I can’t help but think about my visit to El Paso, and how an entire community was impacted by someone who was fueled by hate and killed 23 people in a Walmart. It is critical that leaders in the White House and this President think long and hard about the violence they’re fueling, and get rid of people who actively push white supremacy.”

“Any president in their right mind with any kind of moral compass would demand Stephen Miller’s resignation immediately,” Heinrich said. “However, as we have learned from his own hateful rhetoric, his cowardice in the face of racist violence from Charlottesville to Pittsburgh, and his daily efforts to divide Americans, President Donald Trump is quite comfortable with having white supremacists in the White House.”

“Stephen Miller is completely unfit to be in a position of power over our nation’s immigration policies. While Mr. Miller’s bigoted policy views have long been known, we now have overwhelming evidence that he is a white nationalist,” Udall said. “For nearly three years, Mr. Miller has been driving the Trump administration’s agenda to exclude nonwhite immigrants from contributing to our country, with a particular animus against Hispanic immigrants that is especially offensive in New Mexico.”