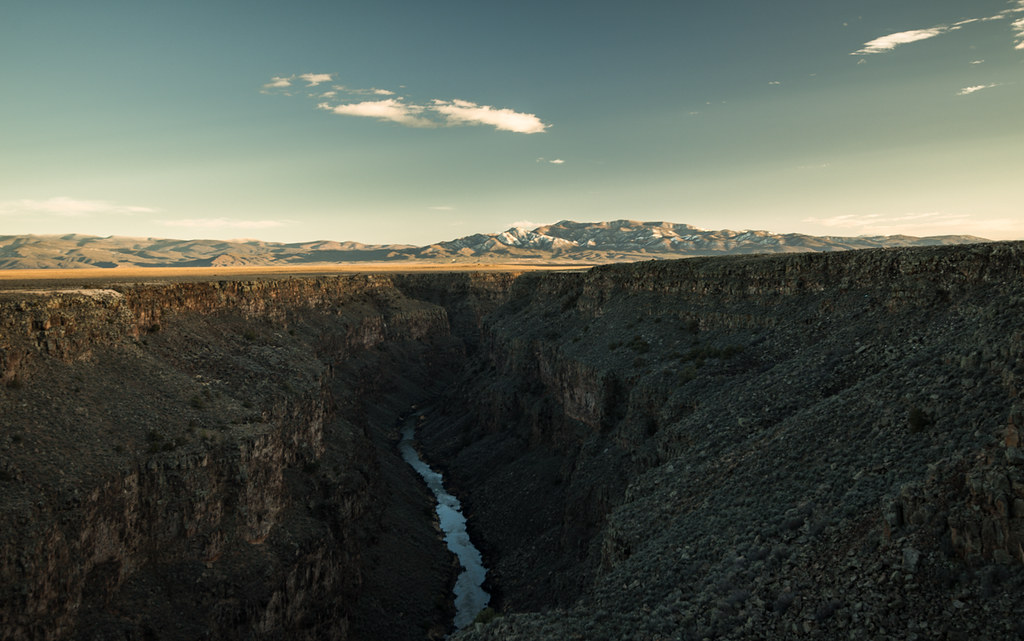 Implementation of the Taos Indian Water Rights Settlement has just begun in Taos Valley, spurring a wave of protests and contentions about what the parties had agreed to, what had been left out, and how the settlement will be implemented moving forward.

Nelson Cordova’s commanding presence quieted an audience gathered in one of the large ballrooms at Buffalo Thunder in Pojoaque. Cordova, who is the director of the Taos Pueblo Water Administration Department, was about to begin his presentation on the Taos Indian Water Rights Settlement, also known as the Abeyta Settlement, at the New Mexico Water Resources Research Institute’s 64th annual Water Conference.

The event, focused on tribal perspectives on water this year, drew a who’s who of water experts, researchers and engineers in the state, as well as an impressive showing of tribal leadership from across New Mexico’s indigenous nations. Water rights settlements were top of mind for many attendees.

Speaking to the crowd, Cordova voiced what has become a common refrain among settlement parties: “Not everybody got what they wanted.”

Congress approved the Taos Indian Water Rights Settlement in 2010, 41 years after adjudication was first filed in 1969. The settlement was one part of a wider push from the state to enshrine tribal water rights into law before appropriating water to other parties.

Cordova said the negotiations were complex and at times, contentious. Initially, “most of the time was spent arguing and calling each other names,” Cordova joked, before the parties were able to put aside their differences and work productively toward a solution.

“Let’s come up with a settlement we can all live with. So we did,” he said.

While the settlement was finalized in 2010, it took another 6 years before the agreement was deemed fully enforceable.

Implementation of the agreement, on the other hand, has just begun in Taos Valley, spurring a wave of protests and contentions about what the parties had agreed to, what had been left out, and how the settlement will be implemented moving forward.

Sixty miles north of Buffalo Thunder, a small group of activists set up camp along state Highway 64, a few hundred yards away from a water well drill site in what’s known locally as the Taos mesa.

El Prado Water and Sanitation District, which was a party to the settlement, is drilling the well, one of the first projects authorized by the agreement. It has also become a target for residents in the area who are concerned that future development will strain the valley’s water supplies.

The Guardians of Taos Water, a loosely-formed coalition of water activists and community members, have been protesting the well drilling activity on the mesa for nearly a year. The latest iteration is a camp staged outside a locked gate that leads to the well site, where a dozen or so citizens have been staying for weeks, keeping warm by a fire and sleeping in tents and in cars.

Bill Gowen, a camp resident, described the settlement as nothing more than “smoke and mirrors.” Gowen said he wants the drilling activity to stop until an environmental impact statement has been conducted that addresses the settlement in its entirety.

“For how long does this have to continue?” he said. “It’s contrary to the will of the people.”

In March, three years after the settlement became enforceable, water activists from the Taos Valley began staging protests against the drilling of the well, voicing opposition to the wells and the settlement implementation. Protests reached a dramatic crescendo when one activist climbed up the drill rig and spent four days battling freezing temperatures forty feet above the ground. The activist was arrested once he came down.

The group spent months trying to get officials to hold public meetings on the settlement to explain to residents how the agreement would be implemented. One of the chief concerns expressed by activists was the lack of public information and outreach about the agreement.

Most of the settlement was negotiated behind closed doors between the parties, without much public input. That has strained relationships between community members and the official parties to the settlement.

“There are specific parts of the settlement that are absolutely required for our community to function. We have to decide who gets to use what water,” said Azalea Gusterson, a spokesperson for the group of activists. “We’re not here to prove a point or prove anybody wrong, we’re actually just here to make sure we’re using water in a way that isn’t going to damage it for generations to come.”

Protestors initially articulated a desire to re-open the settlement to allow the public more opportunity to give input on the agreement. But over the months, the Guardians of Taos Water have focused their energy on calling for a full environmental impact statement (EIS) that would take into consideration the cumulative effects of each of the settlement’s components on the water resources in the area.

“It’s one of the only tools we have available to pick apart the settlement and make sure it’s going to serve our community in a working way,” Gusterson said.

The protest has drawn its own criticism from other members of the community, and among some parties to the settlement. The El Prado Water and Sanitation District filed a complaint against the group after protest actions damaged an earlier well being drilled in the area.

Some in the community view the Guardians as standing in opposition to Taos Pueblo on the settlement. The headline-grabbing protests have focused on wells that will replace existing wells used by the El Prado Water and Sanitation District that are located along the edges of the pueblo’s buffalo pasture. El Prado must drill new wells because the existing wells are drying up the pasture, which is a historic wetland owned by the pueblo.

During a recent public meeting held by the U.S. Bureau of Reclamation on the agreement, the Guardians were called out by a community member — identified as Cheryl Romero of Taos Pueblo by Taos News — for opposing the settlement.

“The Abeyta Settlement is about Taos Pueblo. It is about our water, and giving us the stewardship that has always been ours,” the resident said. “If anyone has any questions, go to the Taos Pueblo Governor’s Office and Taos Pueblo Council.”

Taos Pueblo has been largely silent to the public on matters of the settlement and the protests around the new wells, which made Cordova’s presentation at the Water Conference all that more significant.

Cordova did not mince words during his presentation.

“The lands that are involved in the Abeyta Settlement that belong to Taos Pueblo are stolen,” he said. “We have occupied the place where we live since time immemorial. We’ve always been there, and we’ll always be there.”

“Some non-Indians came in the 1500s and started building settlements in our lands,” Cordova said. “In fact, Taos Valley is pueblo land — but you can see where the town of Taos is, the village of El Prado, the village of Arroyo Hondo, Arroyo Seco and the Taos Ski Valley. These are communities that our non-Indian neighbors way back came and occupied.”

Those communities, along with the Taos Valley Acequia Association, were broadly represented in the settlement, each of whom have stakes in the water rights. In the course of the negotiations, the pueblo gave up half of its water rights.

“In total, we have 11,927 acre-feet [per year] of water,” he said. Those rights include the “historically irrigated acreage and stock ponds, we got water from the San Juan Chama project, we have deep groundwater for our municipal uses and then we have municipal, industrial and domestic groundwater rights; we have water rights for stock wells, and then we have the Rio Grande depletion credit,” Cordova said. The rest was allocated to the other parties.

Both Gusterson and Gowen expressed concerns about the pueblo losing water rights during the process.

“I have my own opinions about how well these settlements protect the tribes’ water rights,” Gusterson said. “Our Abeyta Settlement affirms a small portion of their rights, but then it goes on to remove a bunch of rights that then go to the Town of Taos, El Prado, and also go down stream.”

Gowen agreed. “It’s immoral to be stealing the pueblo’s water,” he said.

Gusterson said she plans to meet with pueblo leaders in the coming weeks to discuss the settlement and best steps for moving forward with the protest.

“That will probably just be a lot of listening, to hear the different parts of the deal and if there are specific parts that [the pueblo] would want to see improved,” she said. “We want to hear where they’re at and we’ve heard nothing so far. We really haven’t had a lot of input or interaction from them. I think it’s just going to be a listening session.”

In the meantime, she said the coalition is looking at ways to improve and incentivize water conservation at the town and county level.

“I think the town and county need to take some responsibility,” she said. “You can’t just keep moving people in with uncapped growth and think this is going to work for our little desert village. It really is not going to.”