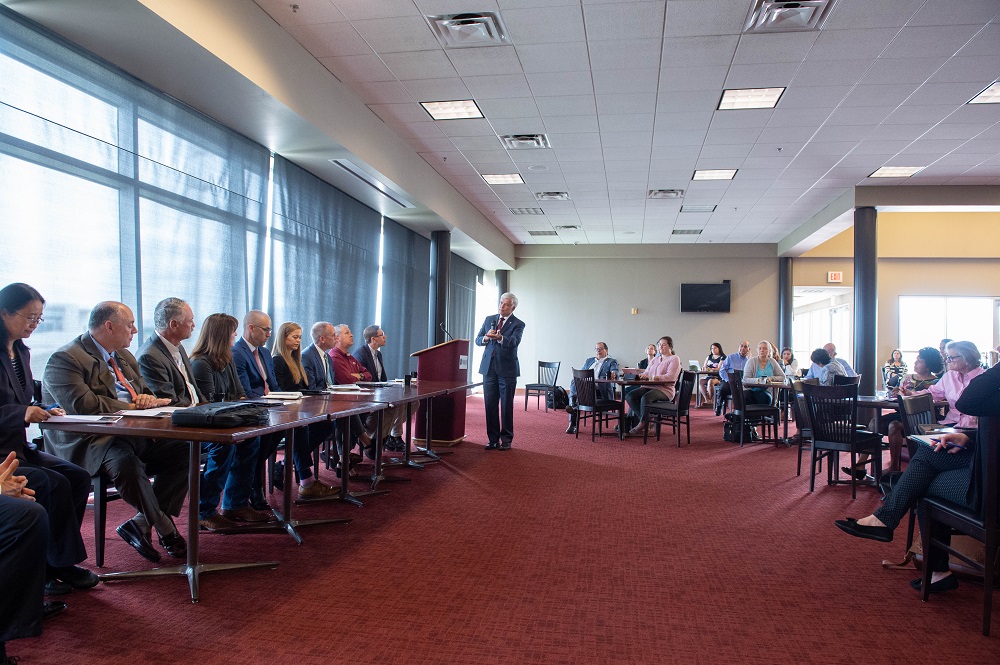 New Mexico State University and the New Mexico Environment Department were joined Oct. 1 by state officials from around the country, U.S. Environmental Protection Agency representatives, industry leaders, environmental groups, legislators and others for an event celebrating the creation of the New Mexico Produced Water Research Consortium.

On a chilly evening in October, Santa Fe-area residents packed into the St. Francis Auditorium for the second of what would be five public meetings held by the New Mexico Environment Department on the state’s plans for produced water. It was only a matter of minutes before attendees began interrupting the presentation with accusations of the state poisoning waterways and calls for a moratorium on fracking in the name of climate change.

Residents and environmentalists alike are concerned about the state’s plan to research and eventually regulate the recycling and reuse of treated produced water, a byproduct of oil and gas extraction that contains both naturally-occurring minerals, hydrocarbons and rare earth metals, as well as chemical additives and drilling constituents that are used in hydraulic fracking.

Every barrel of oil generates four to seven barrels of produced water, according to Bill Brancard, general counsel of the state’s Energy, Minerals and Natural Resources Department (EMNRD).

The state is hoping to treat, reuse and recycle as much of that water as it safely can, both in the oilfield and potentially even outside of the industry, in order to preserve freshwater resources while supporting oil and gas development in the state.

One of the main contentions raised by attendees was the lack of information about what chemicals oil and gas producers are putting into the fracking fluid they use.

“We need to know what those chemicals are in order to effectively regulate them, and we need to understand how those chemicals individually interact with each other, so we can regulate that mixture,” Kenney said during the meeting. “The lack of information that the state has about the chemicals that are used is a problem. That’s why we’re trying to solve that problem by creating regulations that would disclose that information to the state. We can’t make science-based decisions without that data.”

Earlier this year, the state announced the Produced Water Research Consortium, a public-private partnership with New Mexico State University aimed at advancing scientific and technological solutions for the treatment and reuse of produced water. Representatives from the U.S. Environmental Protection Agency, as well as industry leaders and legislators attended the announcement.

But some environmentalists are concerned that the state is putting the cart before the horse.

“All we know about produced water is that it’s too toxic to treat,” Rebecca Sobel, senior climate and energy Campaigner at WildEarth Guardians, told NM Political Report in an interview in October. “Fracking chemicals are proprietary. [Oil and gas producers] do not have to disclose the proprietary chemicals in that cocktail. How can you even pretend to say there’s some sort of standardization for remediation, when every operator has a different cocktail?”

Identifying the fracking fluid chemicals and other constituents present in the produced water is a chief objective of the consortium, according to Mike Hightower, civil and environmental engineering research professor at UNM and program director of the consortium.

“One of the things we have to get through is working with oil companies to identify those proprietary constituents and make sure they’re not putting anything harmful in their fracking fluid that, when it comes up, we can’t treat it,” he said. “We’re working with oil companies to provide us with all of that proprietary information — because we’re a state agency and we can hold proprietary information, we can see what’s in it, we can test for it and we can treat for it. That’s what our researchers are doing.”

Hightower noted that all of the technical universities in the state, along with a few academic and research universities from Texas, and the national labs, will be involved in the consortium’s research.

“We’ve got academic and state and federal institutions that are all going to look at this,” he said. The consortium will lean on chemical analysis groups at the universities and laboratories “to make sure we can quantify everything that’s in that produced water and fracking fluids before and after treatment, to make sure there’s nothing that gets out that’s harmful to the public or environment,” he said.

Finding a path towards a closed-loop system

Characterizing fracking fluids is just one piece of the consortium’s mission. The organization will also research how best to remove some of the more valuable elements, such as rare earth metals, from produced water for reuse in other industries, and whether the wastewater can be treated for uses outside the oilfield.

“They go into a lot of electronics, cell phones, satellites, things like that,” he said. “There’s a lot of interest in how we can utilize this additional produced water in the sense of a resource, versus a waste.”

Resource recovery from produced water is an emerging field of research, and Hightower said the consortium will be conducting cutting edge research in the field. There is currently just one company in the world, located in Pennsylvania, that is recycling the constituents in produced water.

Hightower seemed hopeful that the consortium will find a path towards developing a closed-loop system for produced water in the state, where oil and gas producers reuse as much produced water as possible in the field, precious resources are recovered from the remaining produced water, and the water is ultimately treated and possibly re-used in applications outside the oilfield.

“We need to look at [recovering minerals], look at the costs associated with it, see if we can bring those costs down, see if we can make those recovered minerals help pay for the produced water treatment, and improve the treatment at lower cost for uses outside oil and gas,” he said. “It’s well known within the industry that New Mexico is leading the charge on trying to utilize technical resources to address produced water.”

And the industry is hungry for solutions for dealing with produced water. “Based upon the current understanding and cost, there is a lot of interest among the oil companies to do that. The cost of treatment has come down, technologies are improving,” he said. “If we can demonstrate that at a reasonable level for the oil and gas companies, they would be the first adopters, they’ll jump into it in a hurry.”

NMED’s public meetings on produced water, held in five locations across the state, drew to a close last week. Hightower said that means the consortium can now begin its work in earnest.

“Our plan is to have our first general membership meeting to kick off our technical activities and research activities in the first couple of weeks in January,” he said. “This is kind of run like a National Science Foundation activity. We’ve got the best researchers we can find in the state of New Mexico and nearby states, we’re going to use the best equipment that exists in the universities and the national labs, and we’re going to make that information available to the public to look at.”

“We’re going to be transparent and make sure all the information gets out to everyone. We’re not hiding anything,” he said.

Hightower also said that he shares some of the concerns voiced by environmental activists during the Santa Fe public meeting.

“I think the activists have some points, and I think they need to be addressed. This is an industrial waste water, and we have to treat it as such,” he said. “We should be looking at all of the best technology to make sure that we are treating this water to the level that’s appropriate for public health and safety.”