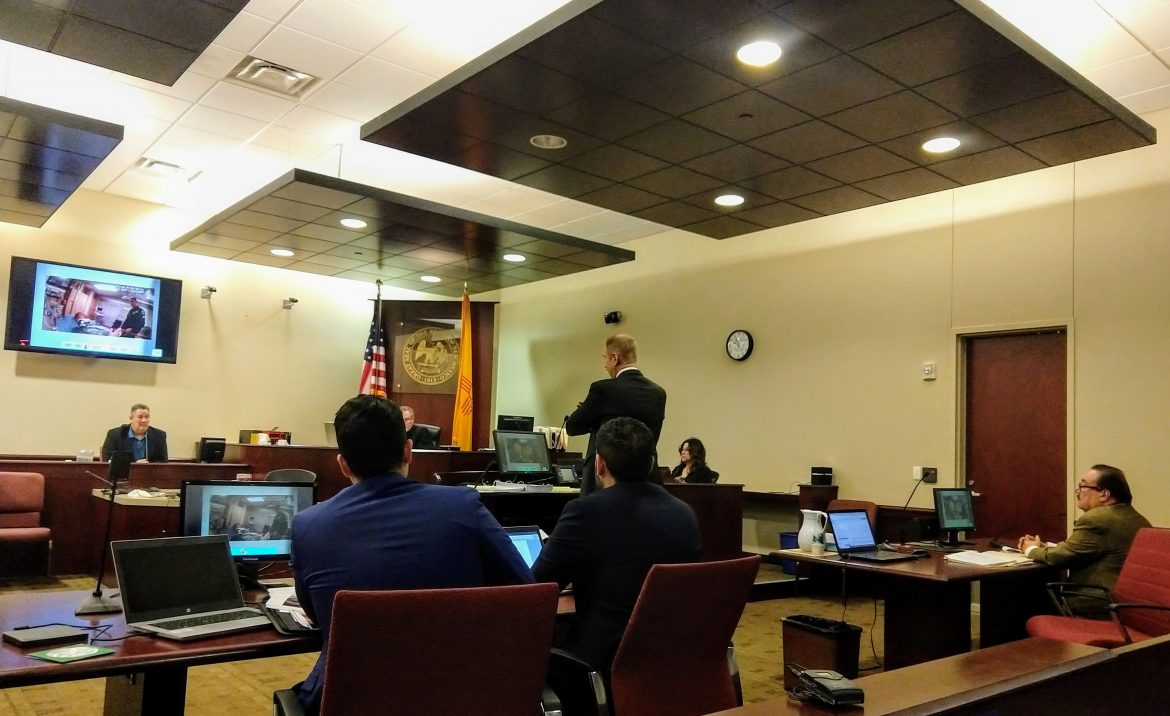 A state lawmaker’s DWI bench trial started Monday morning in Santa Fe. The first day of the two-day trial focused largely on the testimony from two victims, the arresting officer and two doctors.

Prosecutors charged state Sen. Richard Martinez, D-Española, of driving while intoxicated after he was involved in a crash last June. Martinez was arrested after he allegedly rear-ended a man in Española. Prosecutors on Monday argued that there was more than enough evidence to show that Martinez was intoxicated when the crash happened. Martinez’s lawyer spent the day mostly discrediting witnesses and arguing that signs of impairment could have been signs of a head injury.

The New Mexico Attorney General’s Office is trying the case as the Santa Fe district attorney recused himself from the case because Martinez has donated money to one of his campaigns.

Martinez sat stoically as he listened to testimony from both the arresting officer and the man and woman who were involved in the crash.

Johnny Sisneros, who says Martinez slammed into his car, testified that he was at a stoplight with his wife in the passenger seat when he was hit by Martinez’s car and described the impact as a “sudden boom.”

Then, Sisneros said, he was in immediate pain after his car was hit.

“It was like an electric shock,” he said of his neck pain.

He also testified that his injuries were bad enough to prevent him from playing with his granddaughter.

“I was her play buddy,” Sisneros said.

Now, Sisneros told the court, he can no longer jump on a trampoline with his granddaughter.

“I can only sit there and watch her jump,” Sisneros said, holding back tears.

Prosecutors asked Sisneros if he got a clear look at Martinez’s face that night. Sisneros confirmed it was Martinez driving that night but noted how he looked different.

“His face is not as red as it was,” Sisneros said.

Prosecutors also brought up the fact that in pictures and videos from that night seemed to show a dark spot on Martinez’s shorts.

The arresting officer Dustin Chavez, with the Española police department, said he noticed the dark spot that night and speculated that it was a sign of “urination” and testified that incontinence can be a sign of intoxication.

Martinez’s lawyer David Foster tried to make the case that “this was an accident” and that Chavez did not follow protocol when he charged Martinez.

Through cross examination, Foster seemed to lay groundwork to later argue that Martinez’s trouble with the test could have been from a head injury. Foster also implied that Chavez did not follow protocol when notifying Martinez his right to consent to or decline a breath or blood examination.

State prosecutors later called a doctor who treated Martinez and testified that there was no indication that Martinez suffered a major head injury, but that she deemed him intoxicated when she examined him.

Martinez has represented Senate District 5 for nearly20 years. He has publicly said he would not resign even if he’s convicted of drinking and driving. Martinez, along with all New Mexico legislators, is up for reelection next November. Regardless of the trial outcome, he will likely face a Democratic challenger. Over the past several years, Martinez has been one of a few Democratic lawmakers who progressive advocates have targeted for voting against expanding abortion rights and cannabis legalization proposals.

The second and final day of the trial is scheduled for Tuesday when the judge is expected to issue his ruling.