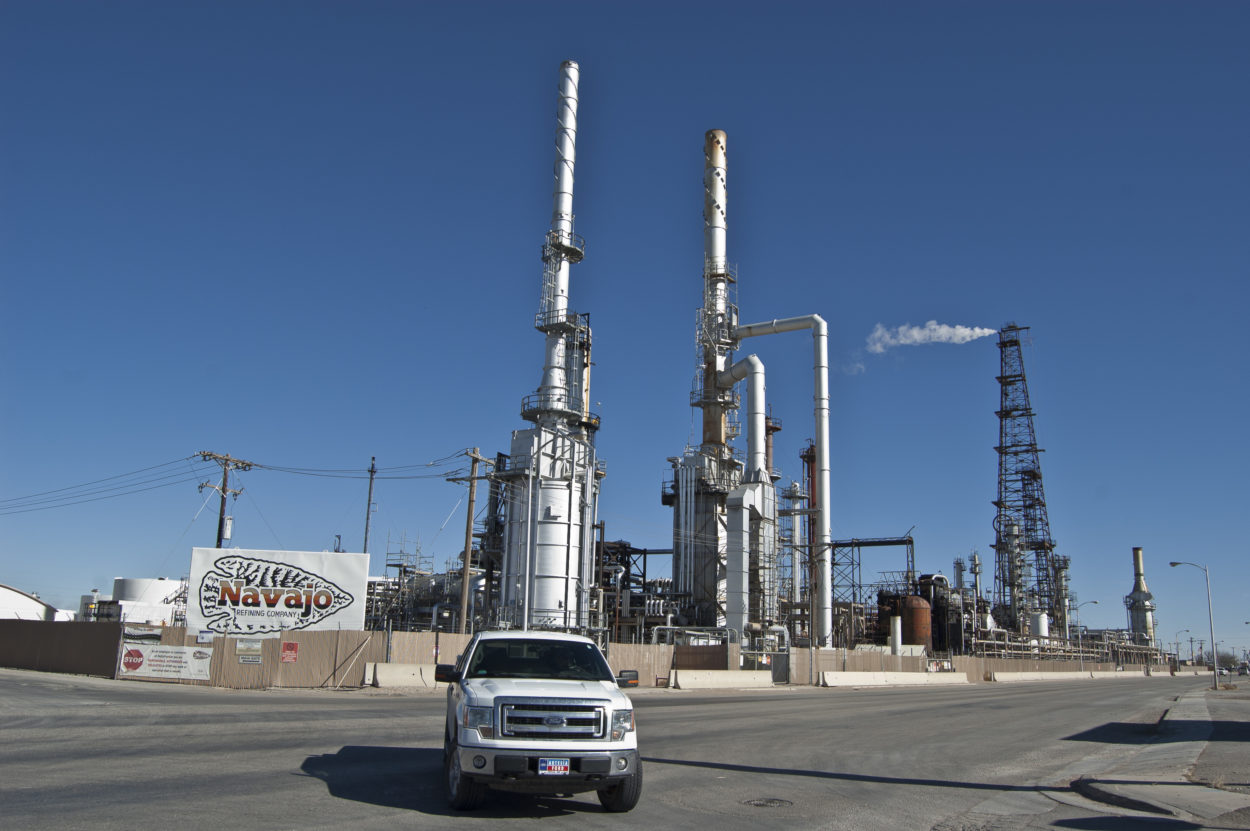 Seated on the floor of First Christian Church on a recent Sunday morning, Pastor Dave Rogers pierces the heart of a debate in Carlsbad as it adapts to a historic oil and natural gas boom.

Rogers recounts to three children the parable of the Good Samaritan. A man from a despised group helps a traveler beaten, robbed and left for dead after religious passers-by ignore him.

“I wonder what it’s like to be a neighbor to somebody we don’t know and that needs our help,” Rogers asks his young listeners as a dozen or so adults, mostly senior citizens, look on.

Welcoming strangers and helping neighbors are values many in the small congregation – and broader community – identify with Carlsbad. The hub of Eddy County in southeastern New Mexico, Carlsbad is home to a 21st century version of a gold rush in the Permian Basin that straddles New Mexico and Texas, where hydraulic fracturing is enabling companies to access an ocean of oil reserves.

But economic prosperity has brought challenges. A surging population is overcrowding public schools. Potholes pockmark overused roads. And municipal services strain to meet demand as more people use them.

After the service, some church members talk of strangers transforming the city they call home.

Several blame heavier traffic and worsening roads on newcomers. The same for the higher prices at grocery stores and at area restaurants.

“Not everyone welcomes them here,” Rogers says, who as a pastor speaks to everyone – native Carlsbadians, recent retired transplants and newcomers like oil workers. “And they know it.”

The surge of workers lured by lucrative wages – oil field workers can command more than $100,000 a year – has surprised this small city renowned as the home of the Carlsbad Caverns National Park south of town. The city of Hobbs, about an hour east, is a veteran of the vagaries of the oil industry – booms marked by a demand for high-paying jobs followed quickly by high levels of unemployment.

It’s a new experience for Carlsbad, however.

Oil and gas executives say this boom, unlike previous ones, will last for years, even decades, an optimism shared by many New Mexico leaders.

A mostly rural state that often competes with Mississippi for poorest-in-the-nation designation, New Mexico is awash in money from soaring oil and gas tax and gross receipts as more people walk around with cash jangling in their pockets and companies benefit from the boom.

Even the state’s lower unemployment rate is in large part thanks to the job growth in Carlsbad and the rest of southeast New Mexico.

One powerful lawmaker, Democratic Rep. Patricia Lundstrom of Gallup, is proposing New Mexico help transport trained workers from economically depressed regions like hers on the other side of the state to fill oil jobs.

That would put more New Mexicans to work, says the chairwoman of the powerful House committee that crafts the state budget each year.

There is no denying New Mexico’s oil boom, but some serve their optimism up with a side of concern.

Republican Sen. Gay Kernan of Hobbs, whose district includes Carlsbad, has lived in oil country since childhood and even ran her father’s oil business for several years after his death.

“I’ve never seen it like this. It is unbelievable,” she says. “Butthat doesn’t mean it isn’t volatile.”

Indeed, signs of that volatility are manifesting. In December, state economists lowered their estimate of new money available to state lawmakers as they convene this month to craft a state budget for the fiscal year that starts July 1. The projected surplus – $800 million – might make New Mexico the envy of other states, but it was $100 million lower than a previous prediction by economists.

New Mexico Oil and Gas Association Executive Director Ryan Flynn describes the newest oil boom as “the new normal” for the region, but Brenda Galindo says many in Carlsbad expect it “won’t last too long; it’s going to go back to how we used to be.”

A Carlsbad native and recently retired after teaching 30 years, Galindo is director of Jonah’s House, a food pantry open two hours a day, Monday through Friday.

“A lot of people like myself grew up here and wanted to stay in this small community – but now, it’s not that anymore,” she says.

Newcomers “have moved from other places in the U.S. – Texas, Oklahoma, all over – sometimes their pay doesn’t meet their food needs,” Galindo says. “Housing is so expensive now, too, that even if they’re making a lot of money at their jobs, the rent is so high they can barely make ends meet. People just double up on wherever they can find homes.”

Public schools are feeling the strain, too.

Teacher salaries haven’t kept pace with Carlsbad’s cost of living, where monthly rent has climbed to $2,000 to $3,000, says Dr. Gerry Washburn, superintendent of the Carlsbad Municipal Schools since May.

The district plans to purchase 50 housing units to rent directly to teachers at affordable rates, the superintendent says.

“For people on the lower end of the income scale – they’re getting squeezed out.”

Recruiting and retaining staff sometimes loses out to the pay oil companies dangle in front of potential employees. And keeping students in the classroom isn’t always easy, either.

“It is really hard to talk to a 16-year-old kid that’s fed up with school … when they can walk out the door and be making $15 an hour,” Washburn says.

Meanwhile, the area’s prosperity masks new challenges. The district lost funding for nutritional services because of a drop in “our poverty rates,” according to Washburn. About 350 students residing in man camps or other temporary housing are considered homeless under state standards, the superintendent estimates, and need additional services from the district under federal law.

“The reality is we probably have a higher poverty rate, but you don’t have a real good way to measure that,” he says.

The general misperception is that crime is increasing, too, but that isn’t borne out by the data, says Carlsbad Police Chief Shane Skinner.

There’s been an increase in reported incidents because of the rise in population, Skinner says, but it’s “not trending upwards at a dramatic or unexpected rate.”

Meanwhile, heavy traffic has battered old roadways. A few miles south of the “Y,” a major intersection of U.S. Highways 285 and 180 that lead to the oil fields, wide pits divot the roadbed of County Road 748, known as the Old Cavern Highway, while passenger vehicles sharing the road with semi-tractors and trailers try to stay clear of crumbling edges.

In 2019, the number of deaths on highways in Eddy County rose to 16, though most are attributed to driver errors. Throughout the county traffic has increased by 4%, but at the intersection of U.S. 285 and 31, considered the gateway to the oil fields where $60 million is being invested by state, county and private contributors, the New Mexico Department of Transportation noted a 20 percent growth — from 8,500 to over 10,254 vehicles.

But the help isn’t translating into peace of mind. People’s daily lives are more crowded, even annoying. Shoppers sometimes stand in hour-long grocery lines. And motorists can wait 15 minutes to turn against oil field traffic. It’s these daily inconveniences that reinforce the conventional opinion around Carlsbad that the town was unprepared for the boom.

City and county officials are playing catch up to the new normal, and investing to ensure the 2020 Census accurately reflects the area’s population growth because of the boom.

They are also racing to meet increased demands on the city’s infrastructure and services, both for the industry and the community, says Carlsbad City Manager Mike Hernandez. A multi-million-dollar water line project is nearly complete and money for street improvement projects is ramping up. Additional housing and apartment developments are consuming the city’s planning and zoning committee schedule.

One doesn’t need to look far to find unease with all the change. In 2018, residents of La Huerta, a northern Carlsbad neighborhood, successfully killed a proposed man camp despite the city’s ability to regulate it. And in December, the residents again protested proposed variances for a development that would have provided over 180 townhome units despite Carlsbad’s desperate need for new housing. A 2017 report by the Carlsbad Department of Development estimated only 3,000 units had been added since 2010, a third of what is needed.

“We know there have been some difficult challenges facing our residents right now in terms of traffic and housing, but we also strongly believe in this community’s ability to adapt to the challenges,” Hernandez says.

Just ask Julie Chester. Owner and operator of the century-old Fiddler’s Inn bed and breakfast on North Canyon Street since 2014, she has doubled the inn’s accommodations from three rooms to six in recent years to cater to her usual clientele of business executives and tourists.

“Some of our tourist-based activities, like the caverns, are still showing strong reports,” Chester says. “They’re still going to the caverns but maybe they’re driving on to El Paso or Alamogordo to stay the night, or Artesia and Hobbs.”

Chester, a Carlsbad native, acknowledged the economic pressure and strained infrastructure, but believes the quality of life in Carlsbad is getting better.

“When I was growing up here, as a teenager I couldn’t wait to brush this town off my feet,” she says. “I didn’t feel like there was anything here specifically for young people. I didn’t feel like it was a place I wanted to start my life.”

But after traveling the world she says Carlsbad is home again, although more bustling than she remembers thanks to the new breweries, restaurants and venues for live music.

“It’s still a good place, even with all the ‘strangers’ – who for the most part are friendly and wonderful,” Chester says. “And they’re working hard. They’re here to make a living. They’re working their tails off and they’re making good money doing it – there’s honor in that.”

Jessica Onsurez of the Carlsbad Current-Argus and Trip Jennings of New Mexico In Depth contributed to the reporting.