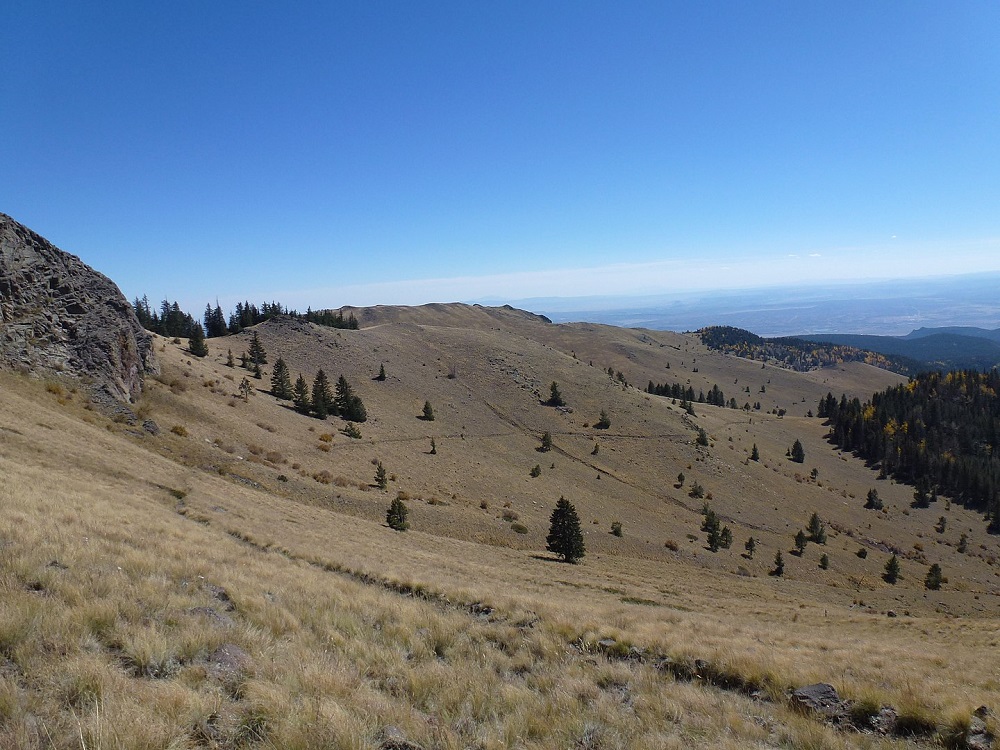 Located just a half-mile from the Village of San Mateo, Mount Taylor can be seen rising from the San Mateo mountains 100 miles in any direction. The mountain, whose peak stretches nearly 12,000 feet upward, sits east of Grants and has long been considered a place of cultural and spiritual significance. Mount Taylor is a pilgrimage destination for at least 30 indigenous communities, including the Navajo Nation, the Hopi and Zuni peoples, and the Acoma and Laguna Pueblos.

The mountain is one of the four sacred mountains that make up the boundaries of the Dinétah land. It holds special significance for the Acoma people, where streams on the mountain feed into the Rio San Jose, one of the pueblo’s primary water sources.

But Mount Taylor also sits atop one of the country’s largest uranium deposits, and was mined for decades. The mine once provided jobs for the surrounding communities, but a prolonged slump in the uranium market has left the operation inactive since 1990. Now, indigenous communities and environmental advocates are cheering a recent decision to close down the mine for good.

“We are excited,” Susan Gordon, coordinator for the Multicultural Alliance for a Safe Environment (MASE),  told NM Political Report. MASE is comprised of groups representing communities impacted by uranium mining in New Mexico.

“A mine not moving forward is such a win for indigenous communities,” she added. “Now we can move into reclamation for Mount Taylor, and not into further contamination.”

Mount Taylor is a volcano located in the Grants uranium belt, where much of the nation’s uranium was sourced during World War II and the Cold War, though mining first began on Mount Taylor in the early 1900s when radium was found beneath the soil.

The Grants Mining District quickly became the locus of uranium production in the U.S. during the 1950s through the 1980s. Today, the scars of those mining operations can still be seen across the landscape. Residential areas are pockmarked with dog holes — test holes drilled in search of uranium deposits — which serve as reminders of the cavalier attitude that the federal government and mining companies had towards uranium exposure at the time.

The Mount Taylor mine, first built by Gulf Resources Mineral Company and later owned by Chevron, produced over 675,000 tons of ore uranium before it was closed in 1990.

General Atomics subsidiary Rio Grande Resources acquired the mine from Chevron in 1991, but didn’t seem to have any plans to reopen it. The company has kept the mine idle for the last two decades under “standby” permits granted by the state Energy, Minerals and Natural Resources Department’s (EMNRD) Mining and Minerals Division.

A handful of speculation bubbles over the past thirty years drove companies like General Atomics to acquire uranium mineral rights in hopes of a rebound in uranium ore prices. But nuclear energy has been on the decline for years in the U.S. There are currently 19 nuclear reactors undergoing decommissioning, according to the Nuclear Regulatory Commission, and 97 reactors remain active across the country.

No economic case for uranium mining

Rio Grande Resources applied for a “return to active” permit in 2013, citing “improving market conditions and recovery technologies.” The permit would have allowed the mine to reopen and begin producing uranium ore again.

But opponents to the mine have called into question the company’s economic case for reopening the mine and say the mine’s closure is long overdue.

“There has been no long term or sustained viable uranium market, and certainly not one that would support economic production at a conventional mine,” environmental lawyer Eric Jantz told NM Political Report. Jantz is a lawyer with the New Mexico Environmental Law Center, representing MASE and Amigos Bravos in a challenge to the active permit.

“All the projections by independent third party bodies suggest that the market isn’t going to see a rebound anytime soon,” Jantz said.

Rio Grande Resources did not respond to requests for comment on this story.

The state Mining and Minerals Division granted the permit in 2017, despite evidence that the mine’s reopening was very unlikely, according to Jantz.

“In the case of the Mount Taylor mine, the company convinced the mining division that an active mine didn’t have to be producing minerals, but had to be contemplating and preparing to produce minerals, and that was good enough,” Jantz said. His clients believe the Mining Commission acted inappropriately when it granted the new permit to Rio Grande Resources.

“The company indicated that it was active because it was planning on reactivation in the future. But no one from the company ever said when they would start to produce, and no one from the mining division thought to ask for that information,” he said.

In December 2019, just two years after it had received its active permit, Rio Grande Resources changed its position on the potential of uranium mining at Mount Taylor. Amory Quinn, president of the company, notified EMNRD that the company will be formally shutting down the mine, but didn’t provide any reasons for the decision.

Rio Grande Resources has 17 months to complete its closure activities. Those activities include sealing up the mine shafts, pumping out and remediating the water that has been contaminated during its decades of inactivity, and moving the existing uranium ore to another facility, according to EMNRD’s public information officer Susan Torres.

“The existing ore pile is currently being removed from the site,” Torres told NM Political Report, while the contaminated soils and sediments “are being placed and covered in a lined disposal cell,” she said.

The surface land that the mine is built on is privately owned. Rio Grande Resources said in its latest permit application that the company expects control of the surface land to return to the land owners, with the exception of two 10 acre plots that surround the mine shaft entrances, which will remain owned by the company.

Rio Grande Resources expects livestock grazing to be the main post-mining land use, and has developed its closure plan to support that use.

“Once vegetation is re-established on the portions of the site not used for other purposes, grazing should be sustainable as it has been in this area for many generations,” the company said in its application. “The mine water treatment pond and waste pile areas will be fenced and restricted from grazing so that a self-sustaining ecosystem can regenerate on fill slopes without interference from livestock.”

The company has 12 years to achieve revegetative success, Torres said. The cleanup will be overseen by EMNRD and the New Mexico Environment Department (NMED), “who will periodically inspect the progress of close out to meet the requirements of [the permit],” Torres said.

“Final close out and revegetative success will be determined after inspection by EMNRD and NMED,” she said.

MASE, Amigos Bravos and others say they’ll be keeping a close eye on the clean up process.

“Ultimately we’re happy that the mine is undergoing reclamation,” Jantz added. “The folks in the Village of San Mateo and the indigenous peoples who consider Mount Taylor culturally important have lived with this mine for too long.”

Correction: This story originally said that My. Taylor’s peak stretches nearly 12,000 miles upward. It should have 12,000 feet. We regret the error.