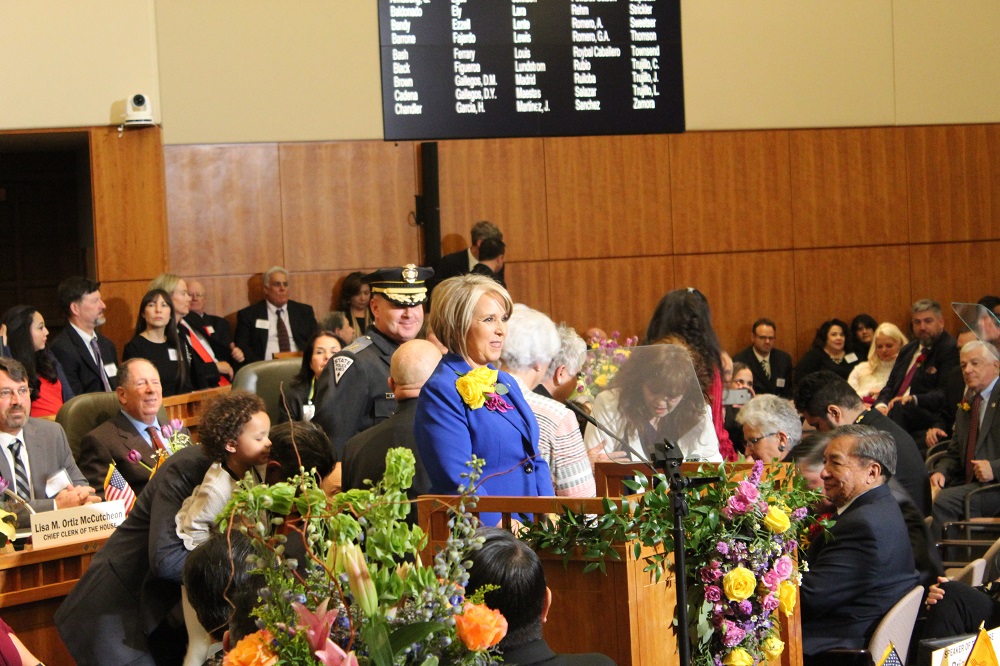 Gov. Michelle Lujan Grisham at the opening day of the Legislature.

Elected officials from around the state gathered at the Roundhouse on Tuesday for the opening day of the Legislature. Here’s a look at the day in photos.

Climate activists representing the New Mexico chapter of the Extinction Rebellion held banners and waved flags outside the Roundhouse.

Extinction Rebellion New Mexico held an event at the Roundhouse on Tuesday to give testimony before the Public Regulation Commission (PRC) at a hearing about PNM’s proposal for replacing power generated at the San Juan Generating Station with natural gas and renewable energy alternatives.

Inside the Roundhouse, Representatives, Cabinet Secretaries, Senators, Supreme Court Justices and other elected officials from around the state packed into the House floor Tuesday.

Rep. Doreen Gallegos, a Democrat from Las Cruces, takes a selfie while waiting for the governor to arrive at the House floor to deliver the State of the State speech.

Lujan Grisham makes her way down the crowded aisle to deliver the State of the State speech.

Lujan Grisham delivers the State of the State address to the House and Senate on the House Floor.

Sen. Jacob Candelaria, D-Albuquerque, and others stand and applaud during the governor’s State of the State address.

Lyla June Johnston prepares before giving a speech in the Roundhouse lobby. Johnston, who will challenge Egolf in the Democratic primary later this year, is holding a series of speeches this week to bring awareness to her campaign message. Johnston also fasting during the week.