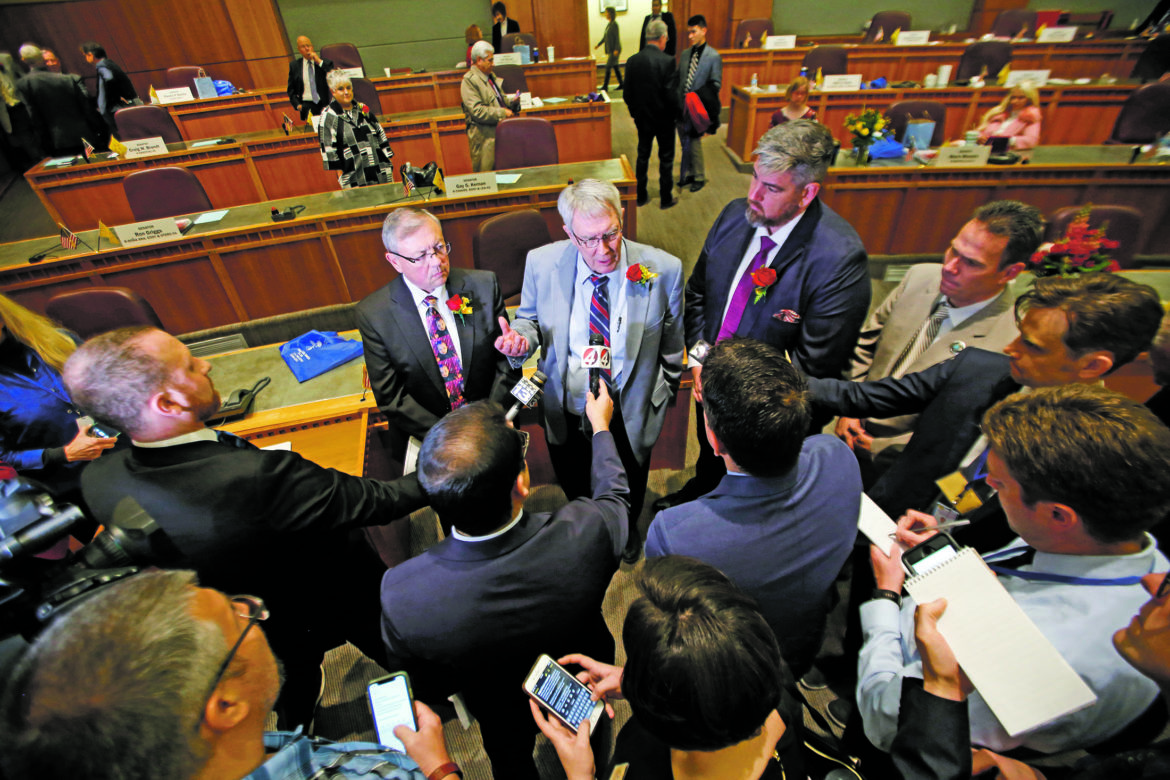 Republicans in the state House and Senate had a common criticism of Gov. Michelle Lujan Grisham’s address to the Legislature on Tuesday: She didn’t give credit where credit is due.

In her second State of the State address, the governor made the case for increasing education funding and other legislative priorities, including the creation of an early childhood education trust fund and her proposed Opportunity Scholarship, which would cover all remaining college tuition costs for qualifying New Mexicans at in-state schools after other aid is applied, regardless of their income.

Lujan Grisham also touted 15,000 new jobs and a better economy after a “lost decade of job growth … stagnation and forced austerity” under former Gov. Susana Martinez, a Republican. But Republicans are hammering the governor for not thanking the industry that has provided the jobs and economic growth that is fueling the governor’s political vision: The oil and gas industry.

“I think the governor had a real good speech,” Senate Minority Floor Leader Stuart Ingle said. “I was a little bit disappointed that the main source of our revenue, oil and gas, wasn’t even mentioned. And without that, the state’s cash flow wouldn’t be anything like it is now.”

“Not even a hat tip to the major industry in New Mexico that pays for education, pays for health care, pays for the ability to create new expenditures like free college tuition,” said Montoya, R-Farmington. “Matter of fact, the biggest round of applause she got was about doubling down on renewables, which is great, but we’re subsidizing [that with oil and gas revenue].”

Related: Governor touts efforts to boost education, economy in 2020 State of the State

The governor has proposed legislation to renew tax credits for rooftop solar energy panels. But the subsidies the state would offer to the solar industry would be funded by revenue from the oil and gas industry, Montoya said. “So while we’re subsidizing renewables, we are gonna do away with the very jobs that exist right now.”

Montoya has proposed legislation to create a Taxpayer Bill of Rights that would put a question to New Mexico voters on the next general election ballot to dramatically limit the Legislature’s ability to increase taxes. The proposal is partly driven by concern that the Democrat-controlled body is spending too much revenue in a state largely reliant on the volatile oil and gas industry, Montoya has said.

Speaking about a surge in new money from oil and gas revenue, Townsend, R-Artesia, said, “I think that the governor has a grand opportunity to make a difference in this state, and I hope we don’t waste it.”

Revenue from the oil and gas industry is providing roughly 45 percent of the state’s budget, money the governor has proposed spending on a litany of proposals, including increasing education spending.

Democrats have defended the governor’s budget proposals as the first opportunity the state has had to make up for years of tightening its belt when cash flow to the state was less flush.

Ingle, R-Portales, had more generous words for the Democratic governor than some of his Republican colleagues, calling the speech “very good” and “very optimistic” at a time when New Mexico has more than $1 billion in reserves and the U.S. and state economy are faring better than they have in recent memory.

Moores and Sharer were less laudatory.

“I was very disappointed in the speech,” Moores said. “There were’t any real solutions. It was a long litany of more government spending, but no real vision of how we’re gonna clean up crime in this state, and I was very concerned that she never thanked the industry that has given us a $2 billion excess revenue in this state, but she did talk about shutting it down.”

The New Mexico Republican Party also criticized the address as a “love fest” for Democrats that did not mention the 8.5 percent spending increase she has proposed in her budget recommendations to the Legislature.

“It’s evident the governor doesn’t understand that her progressive agenda this past year isn’t getting results,” said Anissa Tinnin, executive director of the state GOP. “Her answer to everything is to throw more money into government. This is not only irresponsible but dangerous for our state.”

Update: This story originally did not have the full text of the story; the rest of the story has since been added.