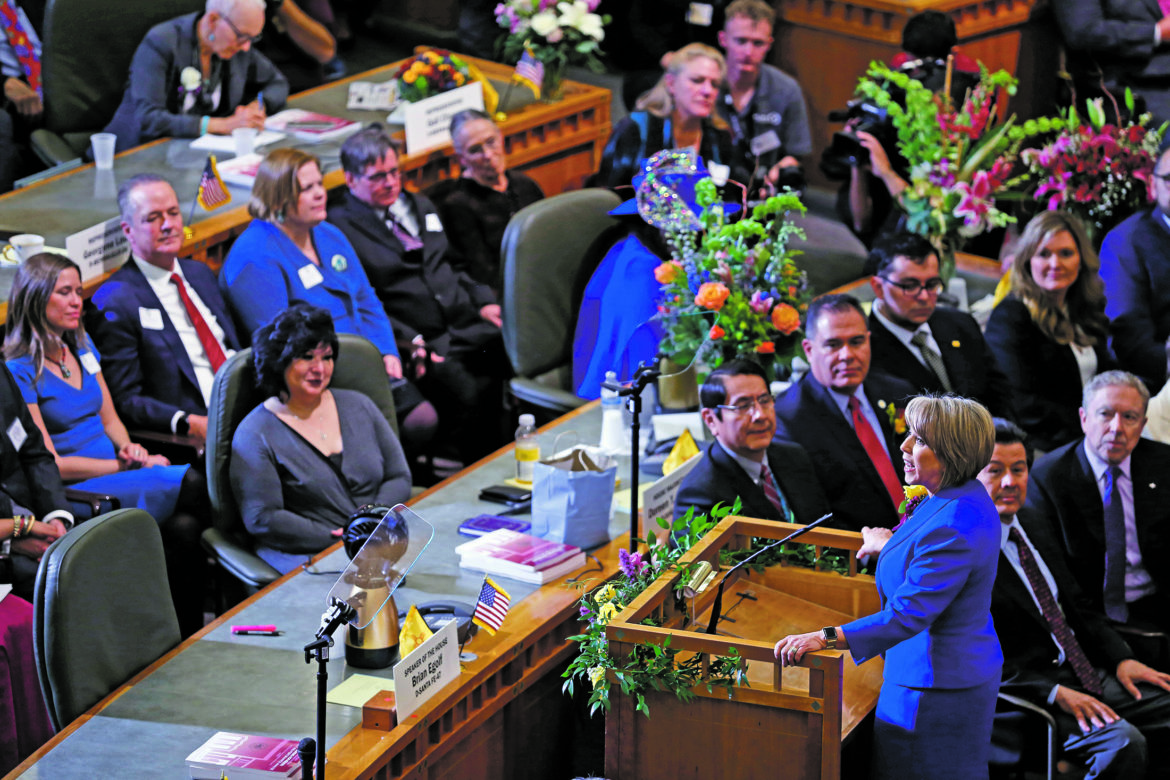 Governor Michelle Lujan Grisham delivers the State of the State address during the 54th legislative session on Tuesday, January 21, 2020.

Gov. Michelle Lujan Grisham stressed the need for New Mexico to continue investing in education and economic development in her annual State of the State address Tuesday, and urged lawmakers to approve marquee legislation such as the legalization of recreational cannabis.

In a speech replete with personal stories and even some jokes, the Democratic governor praised key education proposals on her agenda, including the creation of an early childhood trust fund and her proposed Opportunity Scholarship, which would provide free college tuition for all qualifying New Mexicans.

Related: GOP: Governor’s address was ‘love fest’ with no love for oil and gas

“It would be inaccurate to say we chose education as our top priority,” Lujan Grisham said in a section of her speech punctuated with loud applause. “Transforming our public education ecosystem is no less than a moral mandate, an imperative that found us — this group of legislative leaders who are obligated and, I firmly believe, destined to deliver the single best cradle-to-career educational system in the country.”

The governor delivered the second State of the State address of her tenure to lawmakers, lobbyists, journalists and the general public in the House chamber of the Legislature on the opening day of the 2020 legislative session. Amid numerous interruptions for applause and standing ovations — largely from Democrats — the governor and former U.S. congresswoman recounted accomplishments from her first year in office and made her case for top priorities for the session.

Near the beginning of her speech, the governor took a few moments of silence to remember the three state lawmakers who died over the past year: Rep. Bill Pratt, Sen. Carlos Cisneros and Sen. John Pinto.

As for the particular issues likely to headline the session, the governor gave the greatest emphasis to education.

For instance, she urged legislators to approve a pay raise for teachers for a second-straight year, noting her recommended increase for fiscal year 2021 — 4 percent in her budget plan — would give educators a total pay raise of 10 percent over two years after a hike was passed last year.

The governor also noted progress in education from her first year in office, such as reducing the state’s teacher vacancy rate by 13 percent.

She added that approving the proposed Opportunity Scholarship was necessary to bolster higher education in the state.

“We have back-slid into an environment where college-age students in New Mexico wonder not where they’ll attend college but whether they will at all, where adults who want to go back to school face a financial roadblock to new skills and fulfilling new careers,” she said. “We know if young adults don’t find opportunity here, they will look elsewhere.”

The governor also touted the state of the economy, noting that last year New Mexico posted its strongest job growth since 2005.

“We are rapidly climbing out of the lost decade of job growth, the stagnation and forced austerity of the last administration,” she said.

The governor made mention of investments to fund local economic development and job training incentives that she proposed in her budget plan.

She also put much emphasis on the proposed legalization of recreational marijuana, calling it “the next frontier of our economic expansion.”

“It’s high time we stopped holding ourselves and our economy back,” she said. “Let’s get it done this year and give New Mexicans yet another reason, yet another opportunity, to stay here and work and build a fulfilling 21st-century career.”

Other topics Lujan Grisham touched were health care and public safety. She urged legislators to approve health legislation such as Senate Bill 1, which would allow New Mexico to import wholesale prescription drugs from Canada in an effort to reduce health care costs for families in the state.

Additionally, Lujan Grisham spoke about a package of crime bills she has put on her call, including a proposal to add 60 new state police officers and others that would order tougher penalties for gun, drug and human trafficking.

Yet the governor was light on specifics in other key areas of her agenda. Most notably, she did not mention by name high-profile gun legislation, filed as House Bill 7 and Senate Bill 5, that would let law enforcement obtain a court order to remove guns from people considered dangerous.

Instead, Lujan Grisham recounted the story of a staff member who left work early one day last year after her daughter’s school was locked down because of a threat of mass violence.

“That’s criminal, and this session, we’re going after people who terrorize New Mexicans with threats of mass violence,” she said.

Rep. Daymon Ely, who is sponsoring the Extreme Risk Firearm Protection Order Act in the House, said he approved of the governor’s decision not to discuss the details of the controversial bill on the first day of the session.

“She wants to remind people how mass shootings and suicides are affecting New Mexicans,” said Ely, D-Corrales. “And I think that was smart.”

Rep. Patricia Roybal Caballero, D-Albuquerque, called the speech “invigorating” and said she was glad the governor focused on higher education because many students have financial issues that make it difficult to finish their degree programs.

“I’m very interested in access to higher education and the Opportunity Scholarship because I teach at the university,” said Roybal Caballero, referring to the University of New Mexico. “I see day in and day out the burden of students.”

Rep. Antonio Maestas said he was pleased the governor put emphasis on the economy.

“I’m glad she touted the economy because that’s the foundation of everything, said Maestas, D-Albuquerque.

The governor told personal stories related to legislation on her agenda for the session.

For instance, she recalled helping her elderly mother move out of her home when her father died, and said since then she has been committed to giving seniors and disabled adults “the respect, the services and the dignity that they deserve.”

Lujan Grisham said that was the objective of her proposed Senior Dignity Fund, which would allocate $25 million in nonrecurring money to supply seniors with transportation, food insecurity, case management and caregiver services, and physical and behavioral health services.

There was some comic relief in her speech as well, with the governor referencing her height on multiple occasions.

“We’ve still got a lot of work to do,” she said. “For one thing: We still haven’t shortened all these podiums, they’re too tall!”

She also said people had been asking her all year about her proclivity for drinking copious amounts of coffee, an anecdote reported by The New Mexican in July.

“This past year I heard from many members of our extended New Mexico family,” she said. “Over and over, I heard two things. One: Do you really drink that much coffee? No comment — but also, yes.”

As for what is to come over the next 30 days, Lujan Grisham promised to be hands-on.

“In these next 30 days, I will be who you know me to be,” she said. “Relentless. Competitive. Caffeinated. I will be tireless on behalf of the New Mexicans who have not yet felt the effect of our changing fortunes, our push toward steady and sustainable progress.”