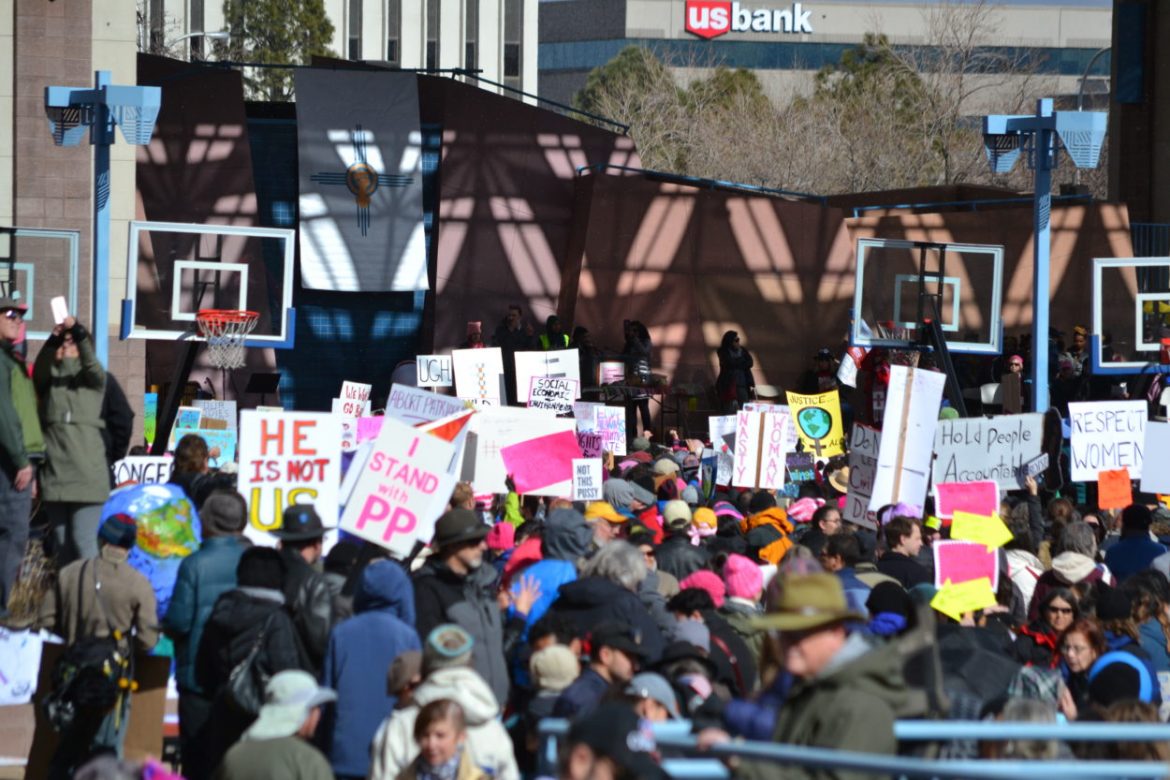 The 2017 Women's March in Albuquerque, which some cite as a reason why more women run for office.

Democrats in the state Senate say they still don’t have enough votes to repeal an old, unenforceable abortion ban that remains in New Mexico law.

They believe a failed effort in the 2019 legislative session — when a handful of conservative Democrats joined Republicans to block it — could see the same results in this year’s 30-day session.

But with the U.S. Supreme Court poised to hear a Louisiana case that is expected to test the landmark 1973 decision in Roe v. Wade, Senate Democrats and Democratic Gov. Michelle Lujan Grisham say they are prepared to hold a special legislative session to protect abortion rights in the state if the ruling is overturned.

“I think we’d be back in a heartbeat,” Senate Majority Leader Peter Wirth, D-Santa Fe, said Wednesday, the 47th anniversary of the Roe v. Wade ruling.

While some Democratic senators remain staunchly opposed to repealing the state’s old ban, Wirth said some of those votes might change if the state actually criminalized abortion.

After the Roe v. Wade ruling, state laws banning abortion were suspended. New Mexico is one of nine states that retain an unenforceable ban. If the ruling is overturned, procuring or providing an abortion — with a few exceptions— would become fourth-degree felony in the state.

Lujan Grisham has not included a repeal of the abortion ban on the agenda for the current session.

But Nora Myers Sackett, a spokeswoman for the governor, said Lujan Grisham is committed to protecting access to abortion and reproductive care, and also would support a special session if the Supreme Court made a ruling that put restrictions on the procedure.

“If the United States Supreme Court made the indefensible and reckless decision to overturn long-standing legal precedent, the governor would absolutely consider every possible recourse to upholding those protections here in New Mexico, including calling a special session,” Sackett said in an email.

Rep. Joanne Ferrary, D-Las Cruces, who has sponsored bills in past sessions to repeal the state’s abortion ban, said she is taking a “wait-and-see” approach this year.

In 2019, Ferrary, D-Las Cruces, and Rep. Georgene Louis, D-Albuquerque, sponsored House Bill 51 to repeal the ban, which sailed through the House but failed in the Senate when eight Democrats joined with 16 Republicans to defeat the measure.

Janet Williams, an abortion rights advocate who is president of Santa Fe National Organization for Women and is organizing a demonstration Thursday at the state Capitol, said her group and others also are biding their time when it comes to asking for legislation that would remove the abortion ban.

And Williams is not predicting what might happen in the Supreme Court.

“I’m not projecting but hoping they’ll fall on the side of women keeping control of their own bodies,” she said.

In November, the Supreme Court agreed to hear arguments in a case disputing a 2014 Louisiana law that requires any doctor providing abortions to have admitting privileges at a local hospital.  Abortion rights advocates say the law serves only to shut down providers.

The court struck down a similar law in Texas in 2016 but now has more conservative justices.

“Roe v. Wade is coming up at the Supreme Court, and it’s about to be gutted,” said Marianna Anaya, a spokeswoman for the nonprofit advocacy group ProgressNow New Mexico*.

A ProgressNow truck parked outside the Capitol on Wednesday had a sign on one side saying, “Keep abortion safe and legal.”

The other side: “Voted against abortion access? We didn’t forget.”

On Thursday, a coalition of 15 organizations and state legislators will meet at 10 a.m. at the Capitol in observation of Roe v. Wade, one in a series of demonstrations planned nationwide.

Williams said the goal is to show support for the procedure and draw attention to bills for pregnant workers and paid family leave.

“We want to keep abortion safe and legal for those in New Mexico and hopefully the United States,” Williams said. “We also believe if you choose to have a baby, you should be taken care of.”