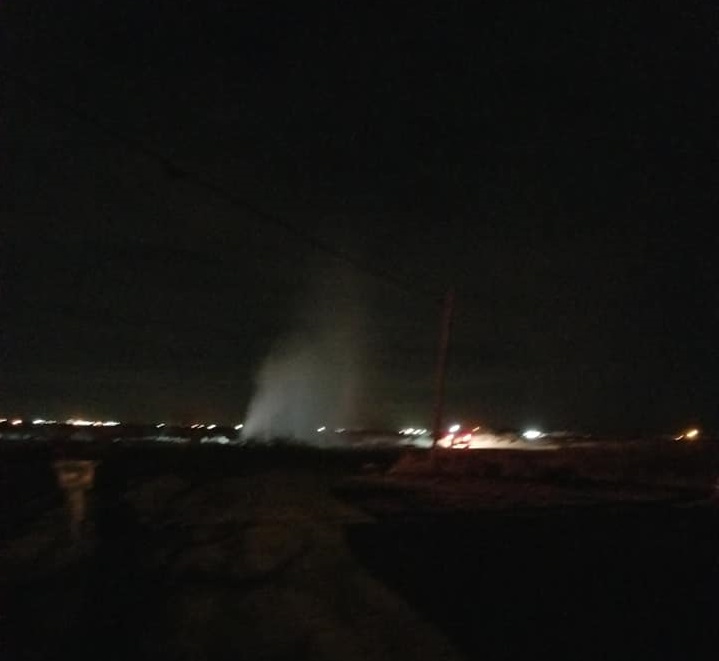 Penny Aucoin and her husband Carl George were awoken in the early hours of Tuesday morning by the sound of a loud pop and gushing water.

“We went out and it was dark at 2:30 in the morning. But when we walked outside we were getting rained on and it smelled like gas — it smelled strongly of gas,” Aucoin said as she recounted the events of the night to NM Political Report. “I said, ‘Honey, where’s it coming from?’ And he was like, ‘I don’t know!’ So he was using his flashlight on his phone trying to figure out where it was coming from.”

The “rain,” it turned out, was produced water, a fluid byproduct of oil and gas extraction activities, spewing from a broken pipe across the street. The water pressure was so high in the pipe that the produced water rained down on the family’s home, livestock and yard a good 200 yards away.

“It was going all over our yard and all over my animals,” Aucoin said, referring to her chickens and goat. “They were spooked, so they were all running everywhere. And I’m trying to shove them all into this little tiny chicken coop, to try to get them out from under it.”

Aucoin said the wastewater poured from the pipe for an hour before the operator that owned the pipeline, WPX Energy, was able to shut it off.

“It was a good forty minutes of spraying over our yard before it petered out and stopped raining on us. It was still coming out, but it wasn’t coming all the way across the road anymore,” she said.

By that time, the property was drenched in the fluid. The burst left Aucoin’s yard, trailers, vehicles and livestock coated in the wastewater.

Emergency responders were able to shine lights in the area to help the family locate the source of the water. WPX Energy employees and representatives of the Oil Conservation Division (OCD), which regulates the oil and gas industry in the state, were also on-site to assess the situation and monitor clean up.

“Nobody light a match around me,” Aucoin wrote in a Facebook post in the hours after the ordeal. “It’s highly flammable, but no worries it won’t explode. Ugh!”

‘Icing on the cake’

Aucoin and George live in Otis, New Mexico, a rural community in Eddy County outside Carlsbad. The property has been in George’s family since he was nine years old.

“When they first moved out here, they didn’t even have water in this neighborhood,” Aucoin said. “He’s always been here. I’ve been here ten years.”

“The oil and gas arrived about six years ago,” she added.

During that time, Aucoin and her husband have witnessed the landscape around them change dramatically as oil and gas activity has steadily ramped up in the area.

“We live next to all these oil rigs and stuff, but we live out in the country. We used to have flares right across from us, but they took those down about a month ago, so now it’s dark again. For a while it was like having daylight all the time,” Aucoin said. “About a year ago, my husband counted that there were 27 flares within a mile of my home.”

Like many that live amidst oil and gas development, Aucoin said her family has been plagued by respiratory issues.

“We have constant headaches, my son gets nosebleeds. It’s like having really, really, really, intense allergies that never quit,” she said. “My daughter is on meds for allergies and asthma. I’ve had to take breathing treatments. It’s horrible.”

Aucoin has been a vocal advocate for families living near oil and gas development who she says are exposed to elevated levels of methane. Aucoin traveled to Dallas, Texas, last year to speak at a public hearing held by the U.S. EPA on its proposal to roll back methane regulations from oil and gas activity.

“It’s frustrating. And having this happen, it’s like icing on the cake,” she said. “How much worse can it get?”

Cleaning up the wastewater

That spike in production has led to a spike in spills, too. In 2018, OCD reported 656 spills containing produced water, representing nearly 4 million gallons. Most of those spills occurred in the counties of Eddy and Lea.

Produced water typically contains formation water — water that has been trapped in underground geologic formations for millions of years — with naturally occurring minerals, heavy metals and rare earth elements, as well as drilling constituents and hydrocarbons, but the exact chemical composition in produced water varies from operator to operator. Researchers are now attempting to devise methods for determining the constituents and toxicity of produced water, which will help state regulators better understand how to treat the wastewater.

The WPX pipe that burst is a part of a short, 1-mile long pipeline that carries produced water from a producing well to a saltwater disposal well, according to Kelly Swan, director of communications and community relations at WPX Energy.

Swan said the company hasn’t yet determined the cause of the burst, but said officials are investigating the situation and will have that portion of the pipe replaced.

“You’re going to take that section of line out of service, and then you’re going to study it. While all that’s happening, you’re also repairing the line and putting in a new section,” Swan said. “Once all that is complete, the line will go back in service. We expect all that to happen by this weekend.”

OCD confirmed with NM Political Report that the department had been notified of the burst.

“At about 2:30 in the morning on Tuesday a resident of Carlsbad called emergency services when they heard a pop and noticed a gas smell in their backyard. WPX, the company who owns and operates the well pad, was notified of a leak in the flowline and began taking appropriate clean-up measures immediately,” Adrienne Sandoval, OCD director, said in a statement. “An environmental consultant is on the site location, and the Oil Conservation Division was notified about the incident. The OCD is in frequent communication with WPX and is ensuring that all clean-up measures are taken.”

WPX employees worked well into the next day cleaning up the produced water on the property.

“We power-washed their vehicles, their fencing and their residence,” Swan said. The company sent out an environmental contractor to apply Micro-blaze, a proprietary bacteria-based product developed by Verde Environmental that uses microbes to breakdown and remove hydrocarbons, to Aucoin’s yard.

“It’s something you can put on a surface that can basically eat up any traces of hydrocarbons. It’s something that we use in the oilfield, and it’s proven pretty effective,” Swan said.

“The homeowners have been great to work with. Obviously, this has been a great inconvenience for them,” Swan said. “We’ve had several people on our operations staff in contact with them and walking them through everything we’re doing.”

While she’s happy everyone is safe, Aucoin said she’s concerned about whether produced water constituents may still present a threat to her family and livestock.

“They said it’s still not safe for my animals to go into the yard. They said four or five days until we can go into the yard. The more I read about this Micro-blaze, I’m still not sure it’s going to be safe for them, even after [the five days],” she said. “I think it takes the [hydrocarbons] out of it, it doesn’t help with the salts and heavy metals. I’m not sure that’s going to make it ok for my grazing animals. The chickens scratch and peck, and the goat chews everything down to the root.”

WPX offered to pay for one load of topsoil, but Aucoin refused the offer because she didn’t think one load would be enough to cover her one-acre property. Instead, the company has taken soil samples to be analyzed, Aucoin said.

“It’s maddening,” Audcoin said later in an email. “They offered me buckets to feed my chickens in and a new chicken coop for them to feel more comfortable in after their ordeal. I’m just furious that they think that is enough to make my animals safe.”