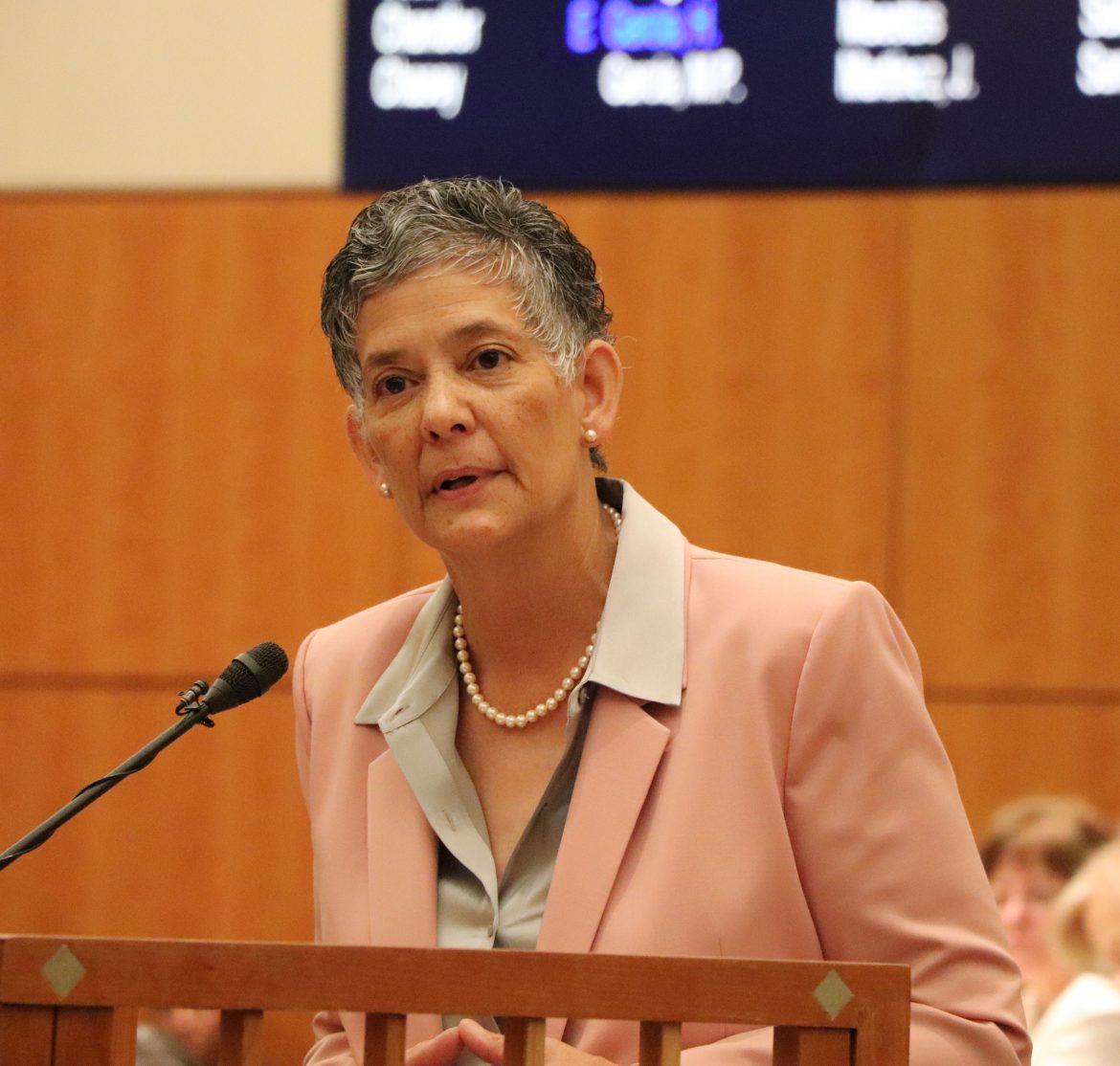 Supreme Court Chief Justice Judith K. Nakamura delivering the State of the Judiciary address to a joint session of the New Mexico Legislature in 2019.

New Mexico Chief Justice Judith Nakamura on Monday pushed lawmakers on the Senate Judiciary Committee for more funding for new judge positions and beefed-up security in courts across the state.

The committee is not directly involved in crafting the state budget, but Nakamura and Arthur Pepin, director of the Administrative Office of the Courts, discussed what they argued is a need for $1.53 million to hire more judges, including one in the First Judicial District Court in Santa Fe, and more than $2.7 million to bolster court security in a state where only two of 47 Magistrate Courts have armed security guards.

“Courts tend sometimes to be fairly volatile places, so ensuring that those who work in the courts as well as those who use the courts remains one of our highest priorities,” Nakamura said after the hearing.

“Police departments, sheriff’s departments, are themselves strapped for resources, or districts are so large they’re off patrolling other areas,” she continued. “And we do have some courthouses where there isn’t security neatly available for a variety of reasons, [or] their call button doesn’t go to the closest sheriff’s department but one that could be a hundred miles away. Thus my point: it’d be safer for that judge and those employees and users of that court to get out of the courthouse than to sit and wait.”

Although the state could make use of about 17 new judges, the court is asking for five, Nakamura added. The Legislative Finance Committee, which plays a key role in budget negotiations, has recommended funding four of those positions.

According to a study by the nonprofit National Center for State Courts, New Mexico could use some 21 more District Court judges to handle the workload.

For years, New Mexico courts have argued they need more judges to process a slew of increasingly complex cases.

Additionally, Nakamura and the Administrative Office of the Courts are requesting an 8 percent pay raise they argue is necessary to attract qualified and talented judges. Salaries for New Mexico District Court judges rank close to last in the nation.

Nakamura and Pepin also handed out a pamphlet to lawmakers comparing the current New Mexico Supreme Court justice salary of $148,207 to a U.S. District Court judge salary of $210,900 and the Santa Fe County manager’s salary of $198,750.

The courts have asked the Legislature to fund an 8.8 percent increase overall, or about $16.2 million for operations, which includes the Supreme Court, the Court of Appeals, District Courts and Magistrate courts, and the Bernalillo County Metropolitan Court in Albuquerque.

In contrast, the Legislative Finance Committee has recommended a 3.6 percent increase in funding for the judiciary system — a difference of about $8.5 million. The committee’s budget request includes funding for four new judgeships, an additional 2 percent pay increase for judges and $1 million extra for Magistrate Court security — less than half of what the Administrative Office of the Courts has requested for security.

Nakamura said some courthouses already have had issues in which judges where threatened or followed.

“We see that frequently in places throughout the state,” she said.

The request includes funding for court personnel, such as a bailiff, court monitor and trial court administrative assistant.

The last time the Legislature made new judgeships was in 2014.

“Our judiciary is very prudent in how they spend money and … has been very careful not to spend money where it wasn’t necessary,” said Sen. Daniel Ivey-Soto, D-Albuquerque, a member of the Senate Judiciary Committee. “So to me, the requests that are made are very credible.”

Criminal cases have to be heard within a particular time frame, so other cases in courts strapped for judges end up falling to the back burner. If those cases take too long, people may “take matters into their own hands and we don’t want that,” Ivey-Soto said.

“All facets of the system must be addressed — to only fund the Court without funding the [Law Offices of the Public Defender] and DA’s office will not solve the case management and docket issues,” Varela said in an email.