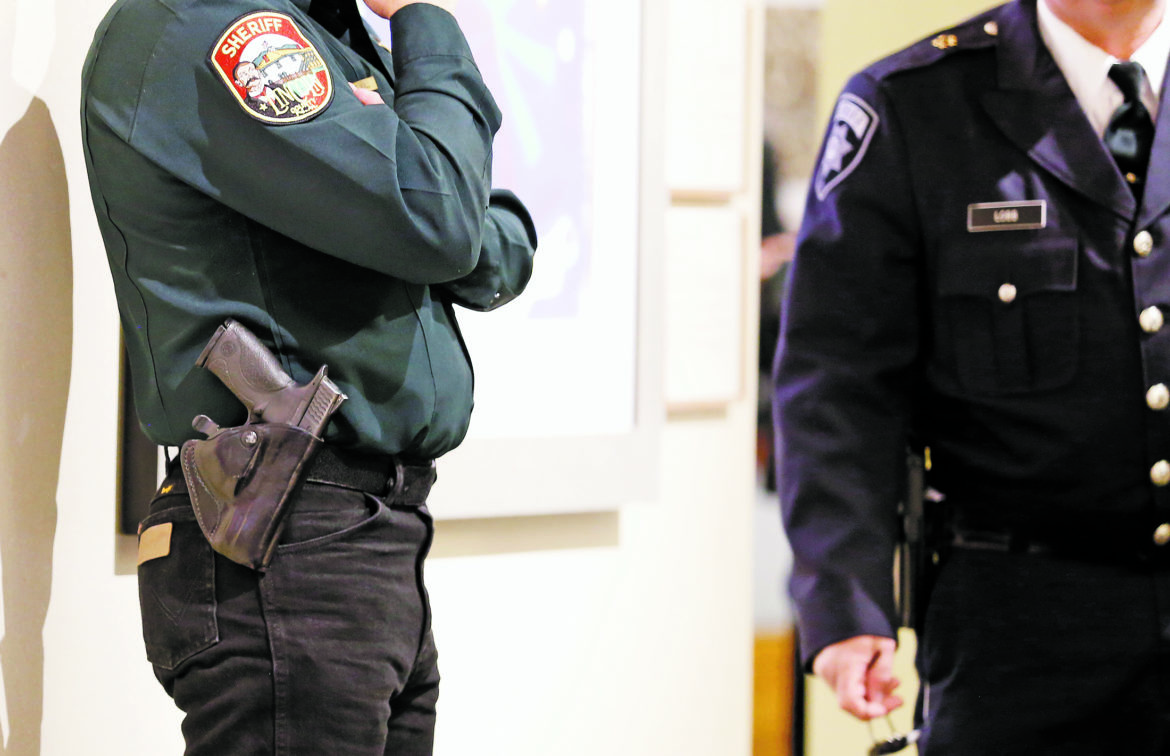 In an emotional hearing before hundreds of supporters and detractors, a state Senate panel narrowly passed a high-profile gun bill on Tuesday that would allow law enforcement to obtain a court order to confiscate guns from people considered dangerous.

The Senate Public Affairs committee voted 4-3 along party lines in favor of Senate Bill 5, known as the “Extreme Risk Firearm Protection Order Act.” The bill will now be sent to the Senate Judiciary Committee.

The legislation is a marquee item on Gov. Michelle Lujan Grisham’s agenda and likely to be one of the most contentious bills heard during the session. If it becomes law, New Mexico would join 17 other states and the District of Columbia that have similar measures, also known as “red-flag” laws.

“I can’t tell you how scary it is to train kindergarteners on how to do lockdowns and exits,” said Garratt, who is an educator and a coach of elementary school teachers. “This is one tool, only one tool to address individuals who pose an imminent threat.”

Twenty sheriffs were on hand to voice opposition to the bill on Tuesday as the head of the New Mexico Sheriffs’ Association said 30 of the state’s 33 sheriffs oppose it.

“We believe this bill has many constitutional issues, that it violates rights,” Cibola County Sheriff Tony Mace told the committee. “As law enforcement officers, we absolutely know this bill has a huge potential for being misused.”

Indeed, the bill is quite contentious. Not only are many legislators divided on the issue; so is law enforcement. While most sheriffs oppose it, State Police Chief Tim Johnson and top Albuquerque Police Department officials favor it.

If it becomes law, the proposal would allow household members or law enforcement officers to petition a court for an order to disallow a person from having firearms. A judge would require the person to give up their guns for 15 days, an order that could later be extended to one year, if probable cause is found that the person poses a threat to themselves or others.

Unlike most hearings of this nature, the meeting took place in the Senate chamber instead of a committee room, with senators on the floor and about 200 members of the public in the gallery.

Prior to the hearing, the hallways outside were lined with sheriffs in uniform and other pro-gun advocates, including a man wearing an NRA hat and a woman wearing two buttons that read “Shall not infringe” next to the images of guns. There were about an equal number of supporters, including a large group wearing red shirts representing the nonprofit Moms Demand Action.

Firearms were banned from the hearing, as members of the public had their bags searched and were checked with metal detector wands as they entered. Proponents and opponents were then seated on opposite sides of the gallery and given half an hour each to give comments.

The bill’s detractors spoke first during the public comment period, including sheriffs, pro-gun advocates, a mayor and even Karen Bedonie, a Navajo woman and candidate for the 3rd Congressional District race.

“When they took us on the Long Walk in this very state, when they took us to Fort Sumner, the first thing they did was disarm us,” said Bedonie, referring to the forced deportation of the Diné from their traditional lands to Fort Sumner, where they were interned in the 1860s. “You cannot legislate against evil. All it does is take the rights of good citizens.”

Next, it was the supporters’ turn, as the committee heard from Johnson, cabinet secretaries, the deputy chief of the Albuquerque Police Department and students affiliated with the nonprofit New Mexicans to Prevent Gun Violence.

Johnson recalled a recent officer-involved shooting in Albuquerque, saying police may have been able to prevent the incident if they had been able to remove the suspect’s firearms.

Proponents, some shedding tears, also recounted personal experiences with gun violence as well as referencing the 2012 shooting at Sandy Hook Elementary School in Connecticut. Lobbyist Vanessa Alarid told the story of her cousin, who she said was showing signs of depression before killing herself with a firearm around six weeks ago.

“If this bill had passed last year, I could have saved her life,” Alarid said.

Democrats on the seven-member committee, such as Sen. Antoinette Sedillo Lopez, mostly voiced support for the bill before voting in favor of it.

“I want to compliment you for taking this on,” the Albuquerque Democrat said. “This is an excellent, excellent opportunity to take guns out of the hands of the very few people in this state who could pose a danger.”

Yet the Republican members took issue with many aspects of the bill, including echoing some of the sheriffs’ long-standing contentions that the proposal violates due process.

Sen. Stuart Ingle, the minority floor leader, said he was concerned the measure would be abused by people who could use it in situations where it’s not warranted, such as in divorce cases. He added that he believed judges would rarely rule in favor of respondents who have had extreme risk orders issued against them.

“I can see a judge’s real predicament when someone comes in and says, ‘I am in fear for my life,’” said Ingle, R-Portales. “There’s not a judge in the country who says, ‘Oh no, I think you’re fine.’”

“Once they’re passed, I have seen these things be really abused much more than they should be,” Ingle added.

Several sheriffs said after the hearing that they intend to continue voicing opposition to the bill at the Roundhouse.

“The fight’s still on,” Lea County Sheriff Corey Helton said in an interview. “We’re going to fight this every step of the way.”

The legislation is likely to be amended as it moves forward. Cervantes told the panel it “remains a work in progress” and that its sponsors are “open” to changing it. He also noted that the last time he carried gun-related legislation, it was amended 14 times.