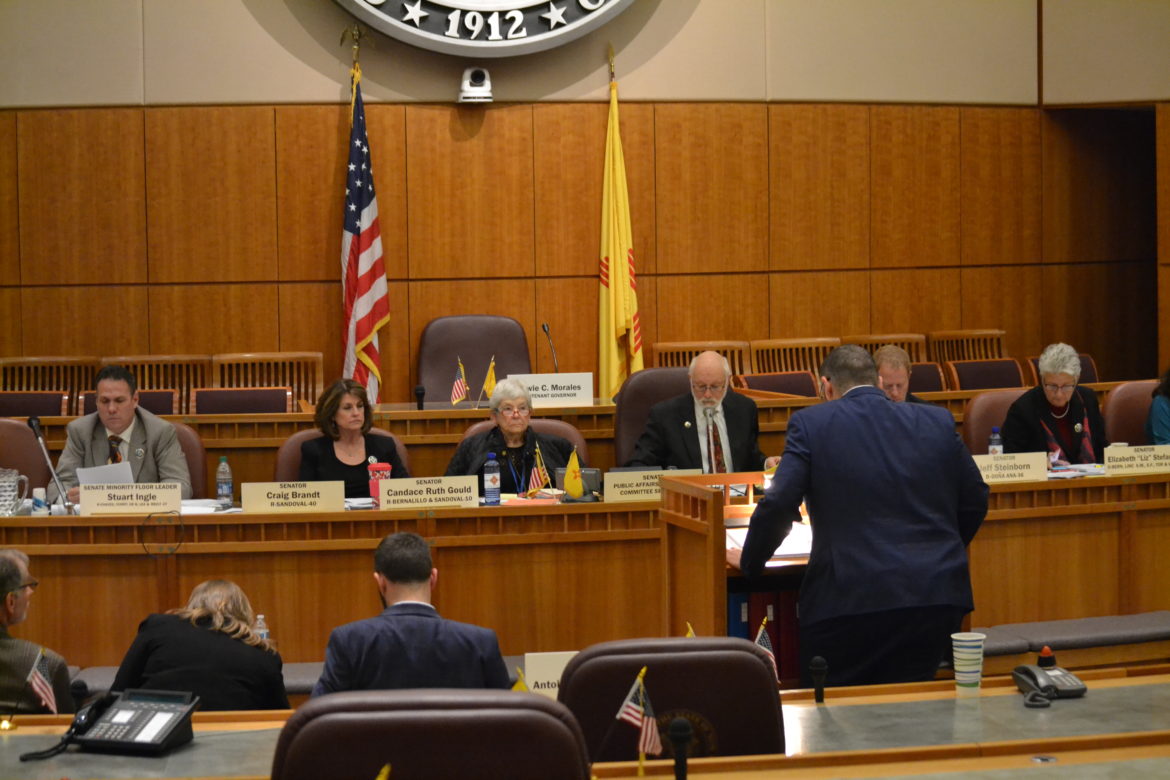 The Senate Public Affairs voted 4-3 along party lines to pass SB 115 after hours of public comment and debate between lawmakers.

Even though a number of people spoke against legalization, they were largely outnumbered by those in favor of it.

For the most part, those who spoke out in opposition said they were concerned about safety and health issues like driving while impaired and addiction.

Candelaria answered some concerns about testing drivers for cannabis use. There is no test for levels of cannabis like there is for alcohol.

“Just because there is no test, doesn’t mean people won’t get caught for DWI,” Candelaria said. “That argument simply does not follow.”

Instead, he said, law enforcement officers already test for impairment in other ways.

As has been the case for several years, the vote for legalization fell on party lines with Republicans voting against and Democrats voting in favor.

Republican Sen. Craig Brandt said he had concerns about cannabis products that would be tempting for kids like gummy candies and how they are packaged. He compared the issue to flavored e-cigarettes that some say are too tempting for children.

“We’re dealing with this whole e-cigarette issue,” Brandt said. “Yet, I’m not seeing anything in this bill that says you can’t make gummies with cannabis or suckers or any of those things that would be on the same line as e-cigarettes.”

Senate Minority Floor Leader Stuart Ingle of Portales, also a Republican, had concerns about who would be able to grow cannabis and how workplace accidents would be handled in a post-legalization world.

“I think we have to be very, very careful where we’re going here,” he said.

While all of the Democratic committee members voted for the bill, they all had questions and a few voiced concerns.

Sen. Jeff Steinborn, D-Las Cruces, asked why the bill would penalize anyone who grows cannabis without a proper license. The bill calls for a number of licenses for those who want to grow and sell cannabis, but there is no provision that would allow home grows for personal use. In fact, while the bill calls for automatic expungements, it also makes growing more that three mature, female plants without a licence a 4th degree felony.

Steinborn told NM Political Report that the issue was not enough for him to vote against the proposal.

“At its surface it’s a little inconsistent if we’re talking about making something legal,” Steinborn said. “Why would we criminalize someone who actually chooses to grow it?”

He said his concerns were mostly answered when Candelaria said legal home grows could be something the state addresses in future years.

Supporters of the bill who showed up to speak in favor of it largely came from state departments like Secretary of the Workforce Solutions Department Bill McCamley. When McCamley was a state Representative he repeatedly sponsored a legalization measure. Other department officials included those from the Department of Agriculture, Department of Health and the Regulation and Licencing Department.

The bill next heads to the Senate Judiciary Committee, where it will likely be examined closely. At the end of the meeting, Ortiz y Pino offered up a packet of amendments, which he said will show up as a substitution bill in the Judiciary Committee.

There is also a House version of the bill that has not been heard in committee yet. The sponsor of that bill, Albuquerque Democratic Rep. Javier Martinez, said the plan is to give the Senate bill a head start as previous legalization attempts have stalled there.

The heavy push for legalization this year came as a result of Gov. Michelle Lujan Grisham’s announcement last year that she wanted to see a comprehensive bill this year that addresses safety and health concerns. Lujan Grisham also convened a legalization work group to come up with a proposal for lawmakers.