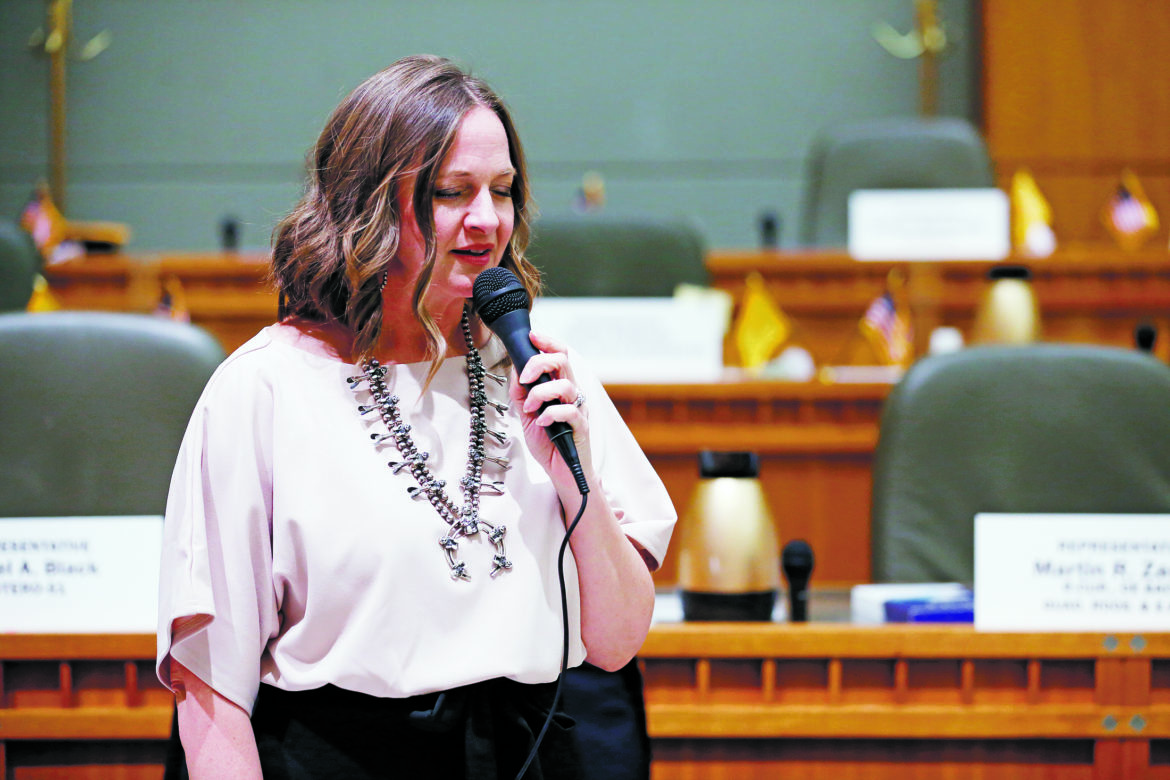 Representative Rebecca Dow, R-Truth of Consequences, delivers the invocation on the house floor on Wednesday, January 29, 2020.

Last week marked the first time Lee Moquino had delivered an invocation before the state House of Representatives.

In fact, Moquino may be among the last members of the public and the faith community to kick off each House session with a prayer.

House Speaker Brian Egolf has decided to do away with the long-standing practice of asking clergy and others to give the invocation; instead, state representatives will provide the daily prayer on the House floor during the legislative session.

The change came soon after Moquino’s invocation, delivered in English and Tewa, in which he told lawmakers they were standing in “occupied indigenous space” and that Chaco Canyon in northwestern New Mexico should be protected from oil and gas drilling and other disturbances.

Egolf said the change had nothing to do with the Jan. 23 prayer by Moquino, a Native American activist who was filling in that day at the request of recently retired Santa Fe Police Department chaplain José Villegas Sr.

Instead, Egolf said, the decision was prompted by an invocation scheduling snafu a day earlier. He consulted with other House leaders before enacting the change.

“The feedback I’ve gotten is the members find it much more meaningful when it’s another member offering a prayer to their colleagues,” he said.

House Minority Leader Jim Townsend, R-Artesia, who said it would be a “privilege” to provide the invocation in the House chamber, indicated in a statement, however, that the change was political.

“I agree with the Speaker that politically charged prayer has no place in this chamber,” Townsend said in the statement.

Townsend did not respond to a follow-up question asking whether he was referring to Moquino’s prayer.

Egolf countered that resources, not politics, were at play.

He said House leaders have had “occasional conversations” about the invocation for about a year, including the origin and costs. A last-minute cancellation Friday — the day after Moquino spoke — forced Egolf’s staff to scramble to find a replacement to deliver the invocation, bringing the matter to the forefront, Egolf said.

“My staff is the one who coordinates who gives the invocation each day,” he said. “They spent probably an hour and a half, two people, trying to find someone to come in and fill the slot. I just thought, ‘Why are we spending a combined three hours to have someone give a 60-second invocation and paying them on top of that and dedicating a parking space to them?’ “

The payment for the daily invocation is about $40, he said.

“At the time, we were just completely up to our eyeballs in getting through all the bill introductions and doing all the analysis for what’s germane and what’s not in the session,” he said. “I just thought, ‘It doesn’t make sense that we’re spending all this time finding a chaplain every day to come in and do an invocation.’ “

Since the Legislature is meeting for a shorter 30-day session this year, rather than the 60-day session it holds in odd-numbered years, Egolf said he asked Townsend and House Majority Leader Sheryl Williams Stapleton, D-Albuquerque, whether they wanted to continue a practice that takes a “big effort” to pull off.

“They just said, ‘We don’t need to keep doing it,’ ” Egolf said. “The Republicans and the Democrats have both been supportive of the decision. Members, I think, really appreciate hearing from one of the members offering a prayer for their colleagues. It’s been nice.”

The change is only in effect on one side of the Roundhouse. The Senate is still asking people of the cloth to deliver a daily invocation.

“The Senate has a chaplain, Richard Murphy,” said Chris Nordstrum, a spokesman for the Democratic Senate majority caucus. “Rev. Murphy finds and schedules those who give the opening prayers on the Senate floor.”

The change in the House brought both anger and disappointment to Villegas, who had been scheduled to deliver the Jan. 23 invocation but asked Moquino to fill in for him because he couldn’t make it that day.

He said he heard from an inside source at the Roundhouse that lawmakers weren’t happy with Moquino’s prayer.

“I got a call from one of the staff members in confidence,” he said, adding he was told Moquino had gone “rogue.”

“I’ve got a long-standing record in support of defending and protecting Chaco Canyon, so statements along those lines would not have been offensive or controversial to me,” he said. “Whatever he said on that day had absolutely nothing to do with the decision.”

Villegas said Egolf should’ve at least sought input from the faith-based community before making a decision.

Asked why an invocation is even necessary, Egolf said it’s part of the House rules.

“Every legislative chamber that I’m aware of, from the U.S. Congress all the way down, does it,” he said, adding he didn’t think state representatives would support an effort to do away with it altogether.

Moquino said he had been expressing his own opinions during the prayer and not speaking on behalf of all indigenous people or his pueblo of Santa Clara.

The activist, who was deeply involved in the successful push to abolish the Entrada dramatization from the Fiesta de Santa Fe in recent years, also suspects politics were at play in the decision to have lawmakers deliver the invocation.

“I feel like it’s an attack on indigenous people in light of who his opponent is,” Moquino said, referring to Lyla June Johnston, a Navajo climate activist who is challenging Egolf in the Democratic primary.

“I believe that he may see Native people as a threat,” Moquino said. “If the person who is challenging his seat is a Native woman whose main agenda is about climate change and protecting our sacred sites and our way of life, and a young Native man gave an invocation that speaks of those topics, which is not disconnected from who we are as Tewa people or indigenous people of this land, he may have seen that as a threat.”