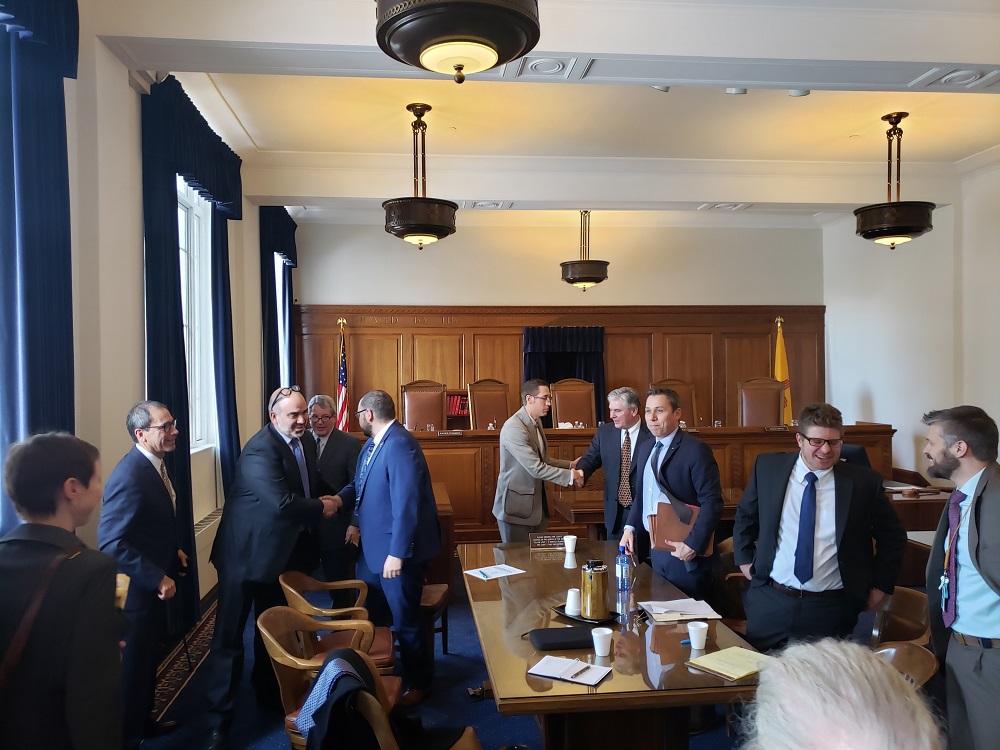 Sen. Jacob Candelaria and others congratulate themselves after a victory in the Supreme Court.

The New Mexico Supreme Court put to rest some of the on-going drama about Public Service of New Mexico’s (PNM) plans for closing down the San Juan Generating Station.

A writ of mandamus is an order from a court to a subordinate government body or lower court to fulfill official duties required by law or correct an abuse of discretion. In December 2019, Lujan Grisham and others asked the court to force the PRC to apply the ETA to the San Juan Generating Station case.

The decision comes after six months of back-and-forth between the PRC and investor-owned PNM on the applicability of the ETA on PNM’s plans for phasing out its coal-based energy generation. In July 2019, PNM submitted a consolidated filing on abandonment, securitization and replacement power for the San Juan Generating Station, just weeks after Lujan Grisham signed the ETA into law. The new law enables PNM to recover costs associated with decommissioning fossil fuel assets through bonds and rate increases to customers.

The PRC decided to bundle the abandonment portion of the plan with an earlier case dealing with the decommissioning of two of the four generating units. By doing so, the PRC called into question the applicability of the ETA to PNM’s proposal — and specifically, how PNM can recoup the costs it will lose in shutting down the coal-fired plant ahead of schedule.

During the hearing, lawyers representing Egolf, Candelaria and Lujan Grisham argued that the PRC’s actions threatened the state’s separation of powers by failing to implement a law passed by the legislature and signed by the governor. They also argued the PRC was causing harm to the state by creating an environment of regulatory uncertainty.

The PRC’s legal team argued that the commission had used its discretion when splitting the consolidated filing into two cases, and said it had set a procedural schedule for holding hearings before determining whether or not to apply the ETA to the case.

But the justices questioned the commission’s handling of the issue. Senior Justice Barbara Vigil and Justice Shannon Bacon asked why the PRC did not make a decision on the applicability of the new law back in July, when PNM first filed its case for closing down the remaining two units of the San Juan Generating Station. The PRC’s attorneys said that once the commission had scheduled hearings for the question of applicability, the PRC did not feel it was appropriate to intervene in that process, which is handled by a hearing examiner.

After a short deliberation, the Supreme Court Justices decided that the ETA should apply to PNM’s consolidated case filed in July.

Lujan Grisham said the court ruling “underscores what we have said all along: the Energy Transition Act is the law of the land.”

“I am grateful for the court’s quick and impartial action, and I look forward to continuing New Mexico’s push into a thriving clean energy future,” Lujan Grisham said.

Egolf said the ruling “affirmed state law and the people’s decision to rapidly transition to an economy built on renewable energy and quality jobs.”

PNM spokesperson Raymond Sandoval said the utility is pleased with the court’s decision.

“We applaud the New Mexico Supreme Court’s decision in applying the Energy Transition Act to all PNM’s filings,” Sandoval said, adding that the ruling “positively impacts the people of New Mexico.”

The PRC did not offer comment on the ruling when asked by NM Political Report.

Clean energy and community advocates in the state also lauded the outcome of the case, saying the ruling will ensure the coal-dependent communities in San Juan County have access to financial resources during the closure of the plant and the transition away from coal-generated power. A provision of the ETA offers financial assistance to aid the community in economic diversification and to help coal workers transition to new jobs.

The court’s decision will “provide real economic benefits for communities, workers, and the economy of Northwest New Mexico,” according to Robyn Jackson, climate and energy outreach coordinator for Diné CARE, a grassroots organization that focuses on energy and environmental justice issues within the Diné community.

“Our Diné communities in the Four Corners region can now fully know they are supported in transitioning from a fossil fuel-based economy to more sustainable and renewable forms of economic development and technologies,” Jackson said.

The decision was not welcomed by all energy advocates, however. New Energy Economy’s executive director, Mariel Nanasi, has been vocally critical of the ETA for a provision of the law that she argues removes some of the authority of the PRC to regulate rate increases to customers to cover decommissioning costs for PNM. Nanasi has called the ETA a “deregulation bill” for PNM, arguing that PNM has grown its profits over the last decade at the expense of New Mexicans.

New Energy Economy filed a writ of mandamus last year asking the Court to rule on whether that portion of the ETA is unconstitutional. The Supreme Court ultimately denied that request without releasing a decision.

Nanasi called the ETA “the enemy of the poor” in a statement to NM Political Report.

“The PRC was diligently working to uphold the N.M. Constitution and the due process rights of the public but that was cut short by the Supreme Court order requiring the PRC to implement the ETA,” Nanasi said.

The state Supreme Court decision comes just one day after Reps. Nathan Small, D-Las Cruces, and Linda Trujillo, D-Santa Fe, introduced HB 11 that would move most of the PRC’s regulatory authority to the New Mexico Regulation and Licensing Department, under the governor’s authority. That bill has not yet been scheduled for a committee hearing.

Lujan Grisham, who supports the bill, highlighted PRC reform as one of her top legislative goals for the 2020 session.