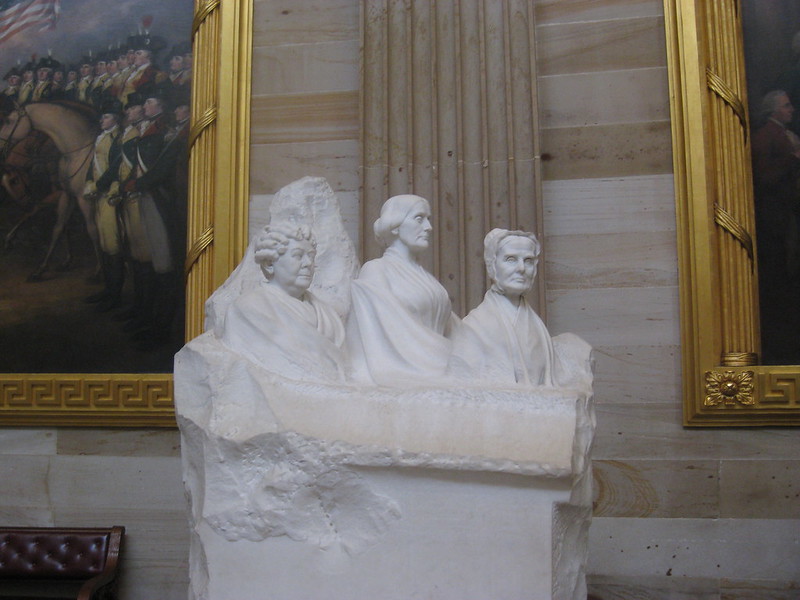 The sculpture at the U.S. Capitol Building in Washington of the three pioneering leaders of the women's suffrage movement. From left to right, they are Elizabeth Cady Stanton, Susan B. Anthony and Lucretia Mott.

Standing in the center of the Capitol Rotunda, outfitted in a sash reading “Votes for women,” 14-year-old Fionnuala Moore lifted her voice.

“Don’t you realize all that we will do,” she sang with a group of peers from Santa Fe Prep, their words echoing Thursday afternoon through the Roundhouse.

During a celebration of New Mexico’s vote to ratify the 19th Amendment 100 years ago this month, Moore performed two of the 27 songs from her self-written musical The Right to Vote. The play, which honors women suffragists from the 1900s, is meant to outline how far the U.S. has come in terms of equality, while also serving as a reminder.

“We still have,” the high school freshman said, “a long way to go.”

Moore said she hopes her musical will inspire women in Santa Fe and beyond to continue lifting their voices and fighting for change.

“[My songs] are not just a historical story. They can be carried into the events that are going on today,” Moore said, pointing to unequal pay, reproductive rights and violence against women as ongoing issues. “The women who fought for what they believed in were successful. It’s a really good success story for women today.”

Moore said she first learned of the women’s suffrage movement in the fall of 2018, after reading the book Votes for Women! American Suffragists and the Battle for the Ballot by Winifred Conkling. Less than a month later, Moore said, she began writing a screenplay based on the real-life events she’d read about, also pulling inspiration from the famed musical Hamilton.

Performing with songs “tells a story in a different way, where you can imagine yourself in it,” she said. “[Musicals] convey a lot of emotion, and you can put yourself in the scene.”

For nearly a year, Moore said, she spent at least an hour and a half every night, and multiple hours each weekend — between schoolwork, soccer, karate, and track and field — working on the project. With guidance from her music teacher, Chris Ishee, who said he volunteered his time outside of school to help compose the songs, Moore completed the musical in October 2019.

Her dedication to the craft is not all that different from the resilient efforts of the women who fought for the very thing she chose to write about, she said.

“It took them 73 years,” Moore said of the suffragists’ persistence. “They never gave up, so if I gave up, I wouldn’t be doing them justice.”

Inside the Capitol, Moore sang the songs “Prove Myself” and “Revolution.”

While “Prove Myself” tells the story of Moore’s “favorite” suffragist, Alice Paul, the lyrics also speak to every woman’s continued efforts to push back against stereotypes and discrimination.

“[Paul] had to prove she was competent enough and brave enough and strong enough. … That’s also how I feel,” Moore said, noting there are very few high school freshmen writing musicals. “I shouldn’t be underestimated because I’m young or I’m a girl.”

“Revolution,” is about a little-known arson attack at a women’s suffrage convention. In the song, two boys from Prep — Moore sang the song with five peers — chanted “Burn them down,” as girls responded “Everyone will know our names.”

The performance at the Roundhouse was the first time Moore showcased her songs in a public space outside school. Soon, she said, she’d like to premiere the The Right to Vote in Santa Fe, and she dreams of eventually taking the play to a national stage.

When she gets older, she said, she hopes to write musicals professionally and be an advocate for women’s rights.

Ishee, her music teacher, said he will continue to support her along the way.

Moore’s audience of hundreds Thursday included Gov. Michelle Lujan Grisham and Virginia Kase, CEO of the League of Women Voters of the United States. Many in the crowd were women dressed like early 20th-century suffragists, outfitted in long white skirts, large hats with feathers and gold or purple sashes.

Watching Moore sing, members of the audience said, was a sign of hope.

Moore agreed, saying even those too young to vote can still have power and influence.

“We’re the future, so we should have our voices heard,” she said.