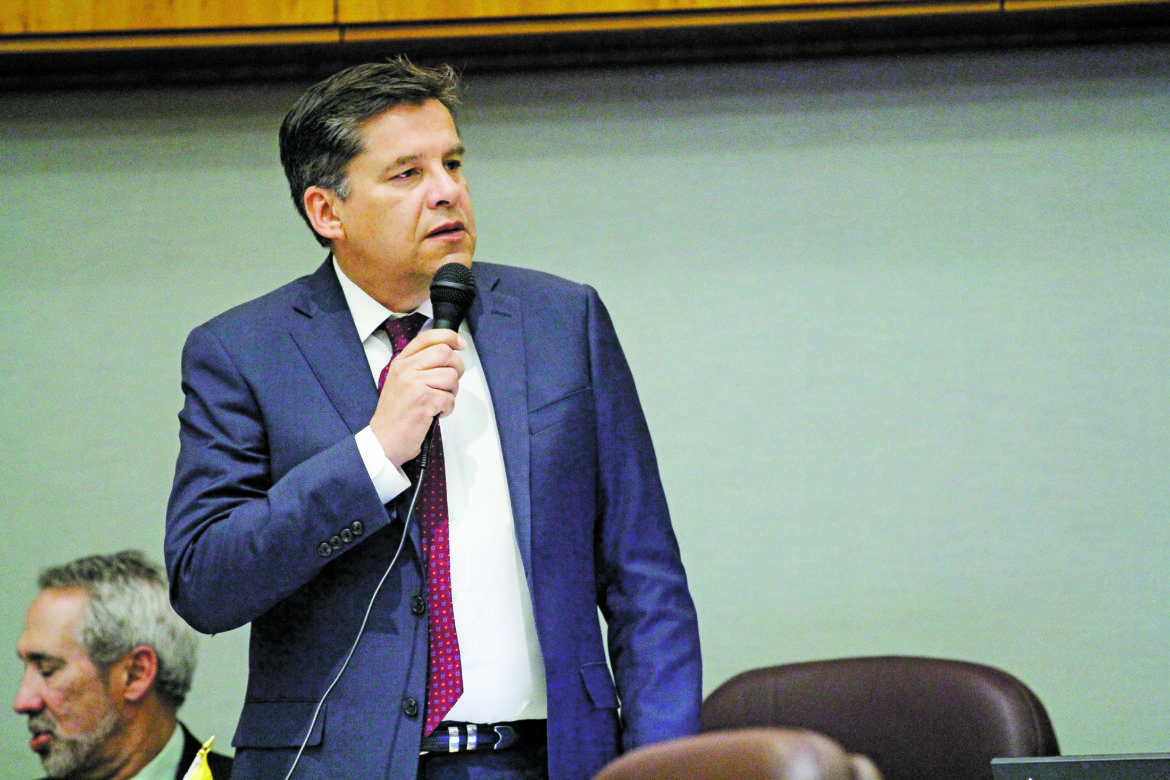 The New Mexico Senate approved high-profile gun legislation in a narrow vote Friday, likely clearing the way for the bill to become law.

The chamber voted 22-20 to pass an amended version of Senate Bill 5, also known as the Extreme Risk Protection Order Act. Under the legislation, law enforcement officers would be able to petition for a court order to take away a person’s firearms for 10 days — an order that could be extended to one year — if they are found to pose a threat to themselves or others.

The measure now moves to the House, where it is expected to pass and make New Mexico the 18th state in the nation, plus the District of Columbia, to have a similar so called red flag law on the books. A comparable bill passed the House in last year’s session but didn’t make it to the Senate floor.

“After every one of these mass killings, we hear about thoughts and prayers and then the issue goes away,” Sen. Joseph Cervantes, the Las Cruces Democrat who is sponsoring the bill, said in his closing argument. “Until it happens again.”

Clearing the state Senate was considered the biggest hurdle for the bill. Even though Democrats have a 26-16 majority in the chamber, they have a number of conservative-leaning members who have blocked progressive measures backed by Democratic Gov. Michelle Lujan Grisham in the past.

While the legislation is a top priority for Lujan Grisham, several members of her party indeed voted against the controversial bill Friday, including Sen. Richard Martinez of Ojo Caliente, the co-sponsor of major gun legislation passed last year.

Yet one conservative-leaning Democrat, Sen. George Muñoz, in a surprise turnaround at the last moment, voted in favor of the bill, helping it over the finish line.

“I am so proud of the Senate,” Lujan Grisham told reporters after the vote passed. “I am incredibly proud of the courage they demonstrated today.”

The governor added that she was “very confident” the measure will pass in the House, while Rep. Daymon Ely, a co-sponsor of the bill, said House Democrats planned to move the bill forward without making any more changes.

It was a tense and warm environment in the packed chambers during the floor debate, heightened by a “call of the Senate” motion made by Sen. Daniel Ivey-Soto, which required all senators to be present in the chamber. At one point, Senate staff fanned themselves with stacks of documents as they walked through the room.

Debate on the heart of the bill took a while to get going, as Democratic senators first proposed and approved six amendments on the floor.

One amendment raised the standard needed for a judge to issue a one-year “extreme risk” order from probable cause to a preponderance of the evidence. Another change would allow a judge to decide how much time a respondent has to voluntarily turn in his or her firearms, instead of mandating, as a previous version of the bill did, that respondents would have 48 hours to do so.

In his comments on the floor, Cervantes described the emotional impact of last year’s shooting at a Walmart in El Paso, saying the bill could help prevent such massacres in the future.

“We have now before you the best law of this kind in the country,” he said when introducing the legislation.

Most of the debate was consumed by Republican senators, who chided the bill.

Sen. Gregory Baca, R-Belen, said it was not right to confiscate firearms from a person before they have committed any crime.

“This is something that may or might or could happen,” Baca said. “And here we are taking away someone’s property.”

Sen. Mark Moores, R-Albuquerque, argued the bill was redundant because a state law already on the books allows law enforcement to detain and subject people to a emergency mental health evaluation if they present a likelihood of serious harm to himself or others.

And as he did in an earlier debate, Sen. Stuart Ingle, the minority floor leader from Portales, said he was concerned the measure would be abused by people who could use it in situations where it’s not warranted, such as in divorce cases.

Republican senators also rebuked some of the amendments, mocking Cervantes’ claim it was the best legislation of its kind in the country and scoffing at typos that needed to be fixed.

While few Democrats spoke, Majority Leader Peter Wirth argued an extreme risk law could have allowed law enforcement to stop the shooter in the 2017 shooting at Aztec High School.

“They were aware of the conduct by this individual that was creating the type of concern that this bill would address,” said Wirth, D-Santa Fe. “But they didn’t have the tool to go in and stop it.”

Muñoz, D-Gallup, sparred multiple times with Cervantes on the floor, questioning whether the bill would help ensure school safety and whether it could actually deal with the threat of violence.

“We’re taking away an object that makes a threat,” Muñoz said. “We’re not dealing with the person who actually made the threat.”

Yet Muñoz ultimately voted for the legislation. He said later he had been undecided up until the moment he said “yes.”

“Every chance you get to not have a parent go to their own child’s funeral is probably the best I can do,” he told The New Mexican.

Tony Mace, chairman of the New Mexico Sheriffs’ Association and a longtime opponent of the bill, said after the vote he still believed the legislation violated due process and he expected it to be challenged in court if it becomes law.

Cervantes said he had “certainty” the law was constitutional, pointing out a similar law is “already working” in neighboring Colorado.