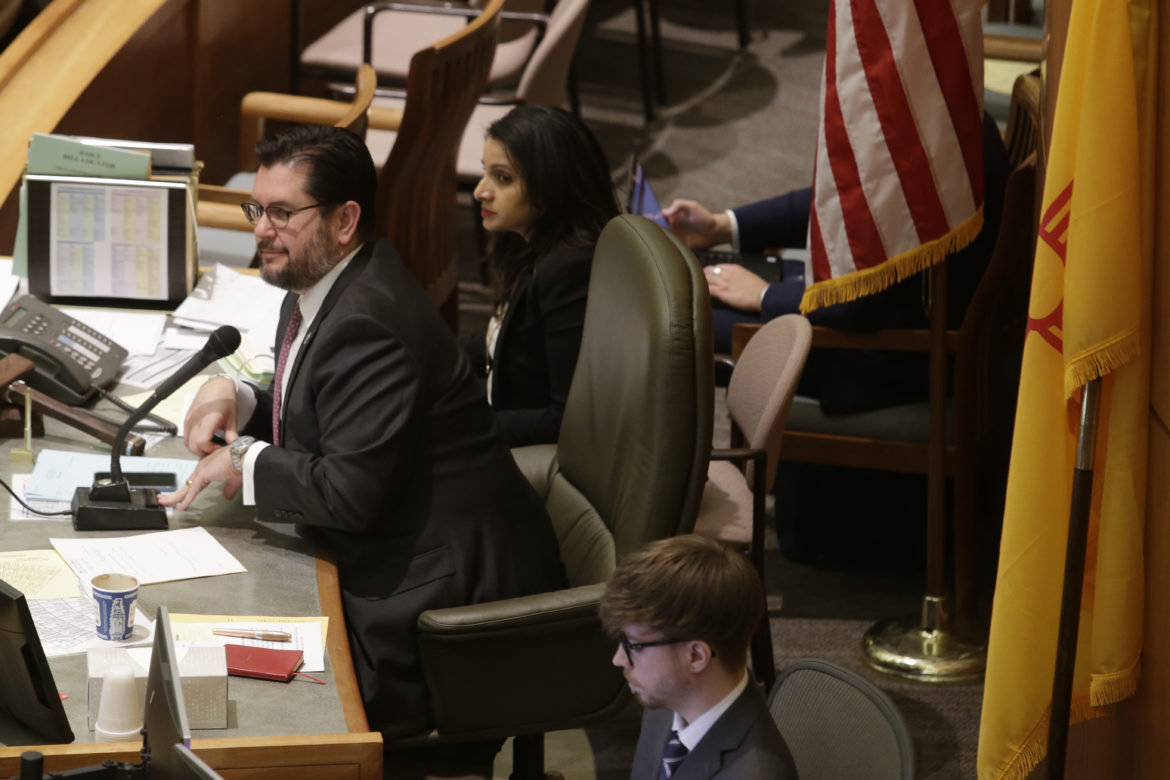 Speaker of the House of Representatives Brian Egolf during the House Session on Tuesday February 11, 2020.

Relations between Democratic and Republican leadership in the New Mexico Legislature were quite balmy through the first two-thirds of this year’s session.

As the streets of Santa Fe froze over during a winter storm that blew in early this week, so did dialogue between the two parties.

House Speaker Brian Egolf on Tuesday accused Republicans of deploying a strategy of extending debate on bills with bipartisan support to decelerate the process of passing legislation they don’t like.

“They have told me point blank that they are going to try to slow everything down,” said Egolf, D-Santa Fe. “The other party just wants to gum up the works.”

Minority Leader Jim Townsend shot back that Egolf was “being a bully” and suggested the GOP might indeed continue to obstruct any fast-paced agenda pushed on the House floor.

Time is one of the few weapons House Republicans have to contest Democratic bills, as they’re outnumbered in the chamber 46-24. With only nine days to go in the session and 43 pieces of legislation listed on the House calendar Tuesday, long debates could make it tough for the majority party to get to all the pending measures, and certainly could lead to long nights at the Capitol.

Similar conflicts arose in last year’s session. Republicans did their best to run out the clock on floor debates, with Townsend saying time was the party’s only means of trying to keep bills they opposed from crossing the finish line.

Sen. Bill Sharer, R-Farmington, talked for more than three hours on the Senate floor one night last year in hopes of stopping a renewable energy bill that had provisions for shutting down the coal-burning San Juan Generating Station. Sharer failed, but the Senate had to concede its annual basketball game against the House so team members could return to the Senate floor. Debate on the Energy Transition Act went well into the night.

Republicans also bristled in 2019 that they were being ignored or steamrolled as Democrats pushed through bills at a rapid clip as part of the so-called “rocket docket” — a package of measures that had nearly unanimous approval in both chambers in past sessions but were vetoed by former Republican Gov. Susana Martinez.

This year, Republicans say the rift was triggered by Democrats’ handling of Senate Bill 5, which would allow law enforcement to petition a court to take away a person’s firearms if they are found to pose a threat. The measure passed the Senate on a narrow vote Friday. House GOP members then became upset Monday when Egolf assigned the bill to only one committee — the House Consumer and Public Affairs Committee — before it goes to the full chamber. Republicans argued the gun bill, often referred to as “red-flag” legislation, should be heard in the House Judiciary Committee  because they needed to examine six amendments made on the Senate floor.

The public affairs committee advanced it Tuesday evening on a party-line vote of 3-2.

Republicans also opposed a decision by Democrats to limit public debate in the committee hearing to an hour total.

“It’s unfortunate because we’d been getting along really good through this process up until now,” Townsend said, “but when you start being a bully and forcing things through like that, you’re going to cause division.”

Egolf said it was “disingenuous” for Republicans to argue they needed more time to read the gun bill.

“They know the bill well,” he said. “They have been following its progress in the Senate.”

Some long delays already have taken place in the House.

On Monday, the chamber took three hours to debate legislation that would create an early childhood trust fund — largely due to lengthy discourse by Republicans — even though the bill has significant bipartisan support and eventually passed the full chamber by a lopsided count of 51-14.

On Tuesday, Republicans used around 75 minutes to pose questions and propose amendments to a bill that would allow the New Mexico Health Insurance Exchange to operate independently from the federal health insurance exchange.

Townsend said his party would use its right to a three-hour debate when SB 5 reaches the House floor. Democrats expect it to be heard before the end of the week.

Egolf said Republicans had threatened at a Monday evening session to keep House members debating on the floor until 2 a.m. Tuesday morning if Democrats took up all four bills they intended to hear. The speaker responded by adjourning the session after votes on only two bills.

Townsend denied he told Egolf his party would keep members working until the wee hours of the morning.

“That is not what I told him,” he said. “I don’t know of anybody on our side that told him that. And I bet you that was not said.”