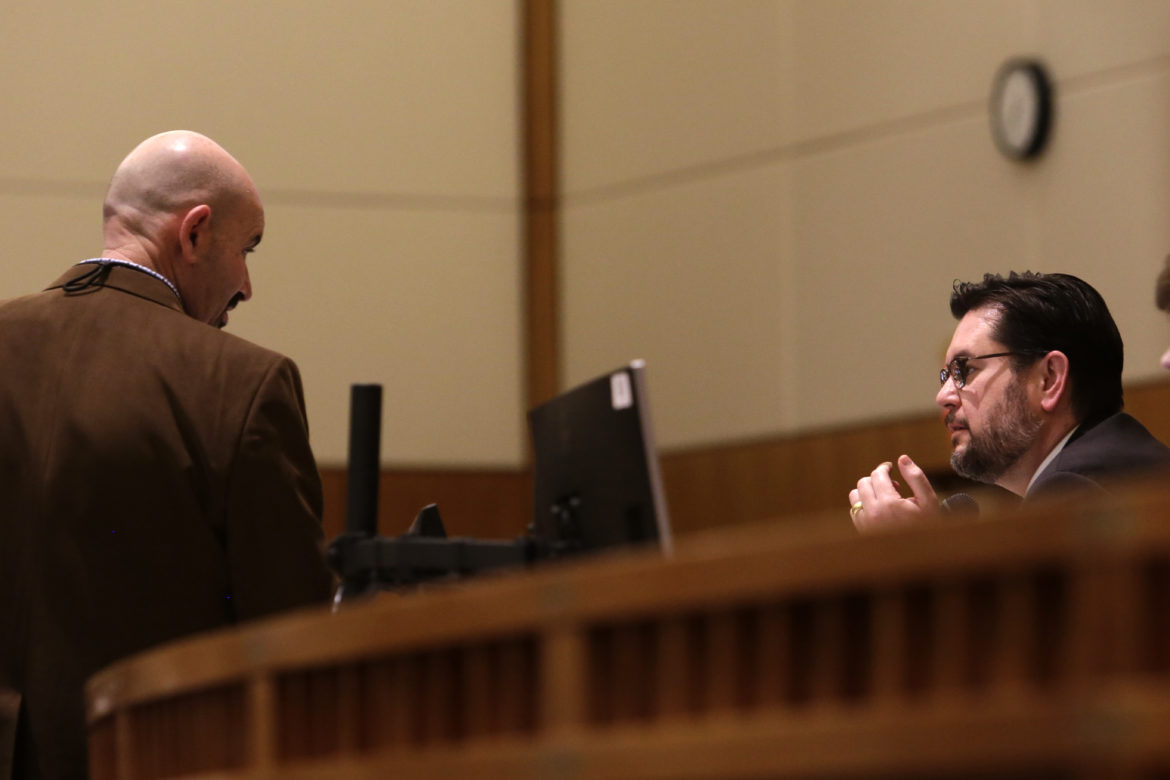 Representative Rod Montoya - (R) - Minority Whip delivers documents to Speaker of the House Brian Egolf during the hearing of SB 5 on Thursday February 13, 2020.

After weeks of heated testimony, the last legislative debate on a contentious gun-control bill played out with little drama Thursday night on the House floor.

But there was a moment late in the proceedings when Rep. Antonio “Moe” Maestas choked up with emotion.

The Albuquerque Democrat described his wife’s 41-year-old cousin, Celena Alarid, sticking a gun in her mouth and pulling the trigger.

“She went to heaven sooner rather than later,” he said.

But much of the three-hour debate over Senate Bill 5 played out like a piece of lackluster theater — one in which everyone involved knew their lines, everyone was tired of saying them and the final scene was very easy to predict.

The House voted 39-31 Thursday night to approve the so-called “red-flag” bill, which will allow law enforcement to petition for a court order to take away a person’s firearms. A judge would require the person to give up their guns for 10 days — an order that could be extended to one year — if probable cause is found that the person poses a threat to themselves or others.

The vote did not fall strictly along party lines. Seven Democrats — Harry Garcia of Grants, Raymundo Lara of Chamberino, Willie Madrid of Chaparral, Rudy Martinez of Bayard, Patricio Ruiloba of Albuquerque, Joseph Sanchez of Alcalde and Candie Sweetser of Deming — joined Republicans in opposing the bill.

Supporters say the measure will save lives in a country beset by gun violence. Opponents say it will likely have no effect on someone who is determined to take a life and that it violates constitutional rights protected by both the Second and Fourth amendments.

The legislation — introduced by Sen. Joe Cervantes, D-Las Cruces, and Reps. Daymon Ely, D-Corrales, and Joy Garrratt, D-Albuquerque — was among the most contentious of this legislative session.

The bill now goes to the desk of Gov. Michelle Lujan Grisham, who has championed it as one of her key crime-fighting initiatives. She is expected to sign it into law in the next month.

Thursday’s debate, attended by about 40 members of the public, brought up much of the same argumentative back-and-forth dialogue that dominated the discussion when the bill was heard in various committees and on the Senate floor.

Republicans questioned the measure and offered a number of amendments, many of which were technical or procedural and all of which were tabled or shot down by Democrats, who outnumber Republicans in the House by a margin of 46-24.

Those Republican lawmakers cited concerns about violating the Second Amendment, questioned whether the state’s district attorneys wanted to be included in the bill under “law enforcement” personnel and did their best to prolong the debate as long as possible.

Rep. Bill Rehm, R-Albuquerque, said the bill will do little to stop people from taking their own life because the legislation gives them 48 hours to voluntarily surrender their gun before law enforcement moves in.

“We’re leaving them in a bad place,” Rehm said.

Garratt countered that the bill will “save lives,” saying gun owners should not fear that their firearms will be seized.

“People are saying, ‘You’re taking my guns away,'” Garratt said. “This has nothing to do with law-abiding gun owners of New Mexico.”

She added: “We value guns in New Mexico.”