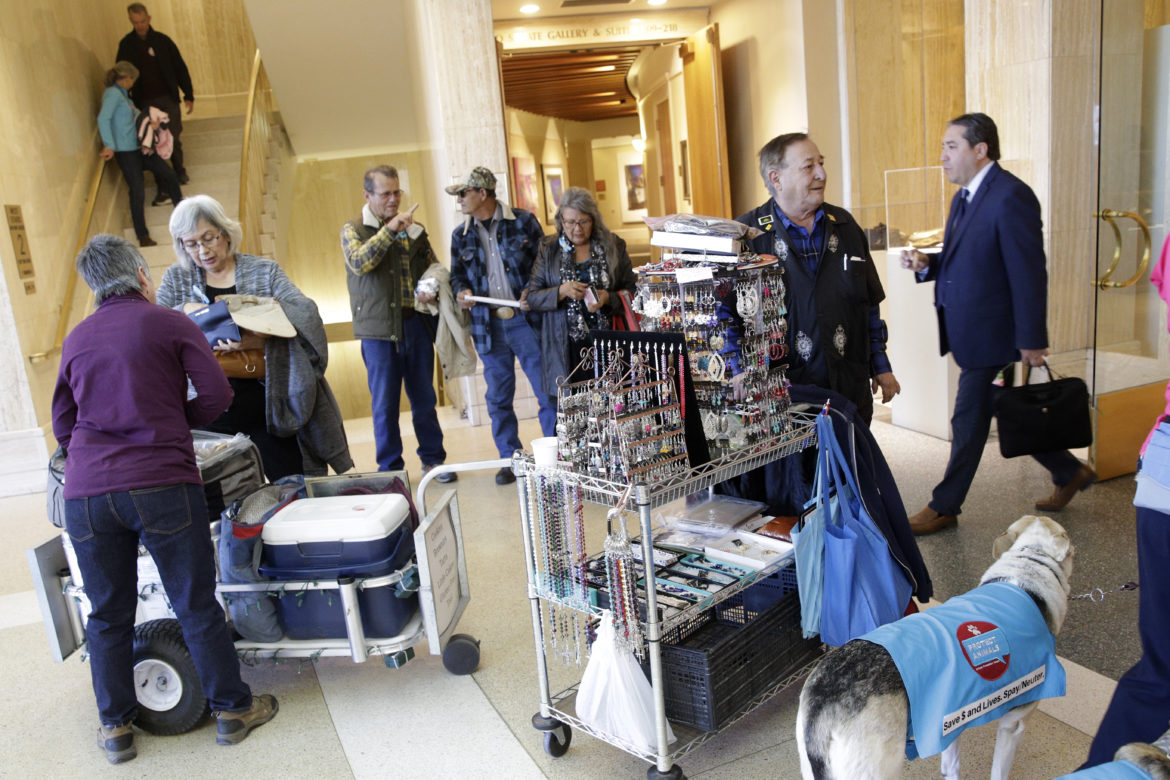 Marian Mendez-Cera traveled to the Roundhouse from Albuquerque to support a proposed bill this week but ended up spending a few bills of her own along the way.

“I came for advocacy, and I’m leaving with earrings,” she said about her unexpected shopping trip.

While most people go to the state Capitol during a session of the Legislature to meet with lawmakers, support or oppose legislation or just to watch democracy in action, the Roundhouse is also a place to do business.

A small but growing group of vendors who sell everything from shoe shines to gluten-free pastries and beef jerky to handmade mosaic inlaid necklaces and turquoise bolo ties are cashing in on the constant turnover of people at the Capitol.

There’s just one little problem with their entrepreneurial spirit: Vending at the Roundhouse is supposed to be prohibited.

A building policy states that the “sale of items is not allowed in any public areas of the state Capitol building or Capitol grounds.”

But so far, everyone is turning a blind eye.

Heck, even the New Mexico Governor’s Mansion Foundation has set up shop outside the office of Gov. Michelle Lujan Grisham to sell Christmas ornaments for $34 apiece to raise money to preserve and maintain the governor’s residence in Santa Fe’s north-side foothills.

“I’m not sure that there’s a hard and fast policy on that,” Legislative Council Service Director Raúl Burciaga said about the prohibition on selling at the Capitol, which his office oversees.

“We have allowed vendors because we try to allow some of the local people who do crafts and jewelry and the like to show their wares,” he said. “The only thing we ask them is to not set up shop, for example, in the Rotunda or committee rooms or inside of any offices.”

Vendors routinely set out their wares on a coffee table close to his office and do business from the comfort of couches. On Thursday, a handful of jewelers and pottery makers attracted a steady stream of potential customers there. A couple of vendors said they abide by a 40-minute time limit, though they said they can stay longer if there isn’t any competition for the space.

“We allow them to set up maybe in a public area, like a lobby area [or] in an area that doesn’t interfere with the business of the Legislature,” Burciaga said, adding that vendors are asked not to stay in one location for a long time.

“Nobody is really policing them,” he added. “It’s grown, and we’ve gotten some complaints. But we also get a lot of favorable, ‘It’s nice to see local wares being offered,’ so we just try to limit it.”

Mendez-Cera, who purchased earrings from vendor Daniel Ronquillo, said she appreciated that local artists are able to sell their handiwork at the Roundhouse.

“It’s especially important for us to be investing in a local community that is creating amazing art,” she said.

Mendez-Cera said she didn’t plan to do any shopping when she came to Santa Fe to support a bill that would increase the state’s Working Families Tax Credit.

“Never crossed my mind,” she said. “That’s why I didn’t come with cash. That’s why I had to take it out” of an ATM.

Mendez-Cera purchased five pairs of earrings for $20 from Ronquillo, which she called a “great deal.”

Ronquillo, a Santa Fe native, said he has been selling his wife’s handmade beaded jewelry at the Capitol for more than two decades.

“She’s home making me some stuff,” he said while standing behind a cart loaded with various jewelry, from baby bracelets to rosaries.

“When I sell something, then I call her and she remakes it for me for the next day,” he said.

Ronquillo said he can make up to $500 on a really good day but averages $250. He expected business to be good on Friday because of Valentine’s Day.

“The sky is the limit,” he said, adding that he has several pieces with hearts.

Leah Berg, who sells cookies, brownies, tarts and little cakes, including gluten-free pastries, said she’s been doing business at the Capitol for years. Her prices range from $4.50 to $13, though she said she makes “special” tea cookies that cost up to $24 each.

Berg often sells her sweets on the corner of Palace and Washington avenues just outside the downtown Plaza but said the Roundhouse offers protection from the elements.

“The few vendors that show up haven’t become a problem,” he said.

But an influx of vendors could create an issue, Baca said.

“Is it going to be a problem next year after this story?” he said. “It could be.”

Burciaga agreed that the state may need to be stricter with vendors if the numbers grow.

“I would have to go back to the Legislative Council and see how they would like to address that or they may just charge me with doing that,” he said. “If it gets to the point that it’s interfering with the legislative business and traffic and whatnot, then we may have to do something.”