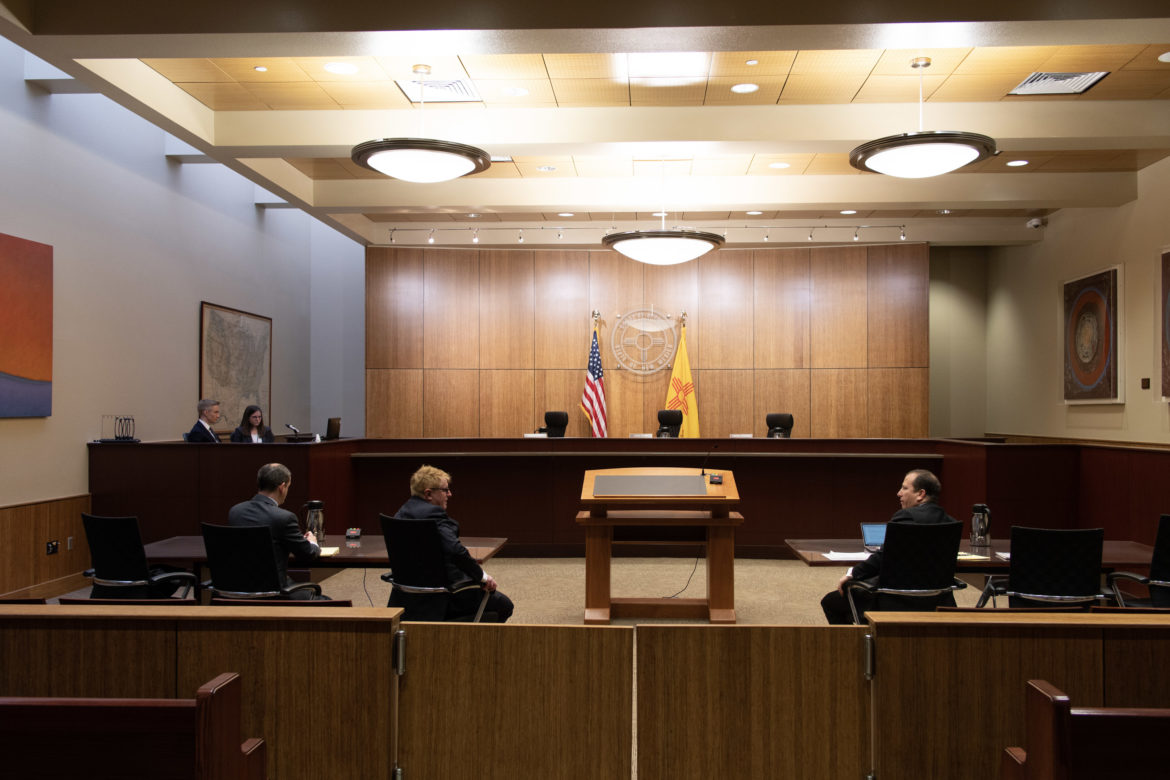 Attorneys wait for the judges to arrive to hear oral arguments in the New Mexico Court of Appeals in Albuquerque. Photo:

Ruben Romero thinks he got an unfair trial.

The 20-year-old is imprisoned at the Lea County Correctional Facility in Hobbs for his role in a 2015 murder, which happened when he was 16. He is appealing his 10-year sentence because, he claims, he wasn’t properly informed of his Miranda rights – his right to remain silent – before he was questioned by a police detective.

The New Mexico Court of Appeals received all of the documents in April of last year — 10 months ago — and nothing has happened since.

But these days, long delays are routine at the state’s second highest court. Funding shortages, staff turnover, and a wave of judicial retirements have hamstrung the court, slowing down its most basic functions.

Romero’s case is one of more than 450 that languished in the court’s inbox in mid-February, according to a Searchlight review of judicial records. As of that time, the court hadn’t even taken the most basic steps to start each case on a path toward a decision.

The Court of Appeals catches mistakes made by lower-level courts — for instance, the misapplication of judicial rules or errors in the use of evidence. In general, while it ponders a case, the original decision stands, so delays affect a myriad of people. This includes inmates like Romero who have been sentenced to prison for major crimes, as well as parents contesting decisions about child custody and business owners waiting for resolution over debts owed.

The problem has been escalating for nearly a decade. A Searchlight analysis shows that the average amount of time it took the court to get started on cases increased from about 30 days in January 2013 to longer than four months in January 2019. Interviews with more than a dozen current and former attorneys and judges, along with a review of hundreds of pages of documents, reveal that the court is stretched precariously thin, leaving litigants like Romero in limbo as the pace of justice slows.

Several attorneys said that delays at the Court of Appeals should be understood in the context of a statewide justice system that is overtaxed in general.

“There’s not enough money for the Court of Appeals, and any element of that system, to do the job it’s being asked to do,” said David Henderson, the state’s top appellate public defender from 2016 to 2019.

The slowdown at New Mexico’s Court of Appeals is part of a national pattern — courts around the country are struggling to mete out justice in a timely fashion.

More than a million cases are pending in federal immigration courts alone, forcing some migrants to wait years for resolution. Other federal courts face an increasing number of cases filed before fewer judges — a California judge last year reported that the next opening for a civil trial was two years in the future. And appellate courts in more than a dozen states have failed to keep up, receiving new cases more quickly than they’re able to churn out decisions, according to 2018 data.

In the past few years, the New Mexico Court of Appeals has been contending with two intersecting backlogs, and a recent attempt to alleviate one problem has worsened the other.

The first clog comes at the very beginning of the appeals process.

The court receives about 900 appeals a year, and a cadre of lawyers sorts through the mountain of paperwork. Generally speaking, the attorneys divide the cases into two categories — easy appeals that can probably be decided quickly, and hard cases that will take longer. Once a judge approves, the easy cases are fast-tracked, which leaves judges with more time to ponder the difficult ones.

But that process, called “calendaring” in the jargon of the court, has been slowing down, in large part due to staff turnover. Between 2012 and 2016, four staff attorneys with more than a decade of experience retired from the court. In fiscal year 2017, the court’s budget was cut, and the next year the division shrank from 16 to 11 attorneys. Several left for higher paying jobs.

The average time it took to calendar a case skyrocketed, topping four months for cases filed in January 2019, according to a Searchlight analysis.

Because of these delays, months can pass before a case even gets off the ground. Romero’s case is a good example.

“If you don’t calendar them, nothing happens,” said Bridget Gavahan, the court’s chief staff attorney from 2006 through 2012. “They just sit. They molder.”

Around the same time the court was losing staff attorneys – which contributed to slowdowns on the front end of the process – judges began departing. That led to a logjam at the back end, where decisions are made.

From 2015 through 2018, seven long-serving judges left the court. The chief judge, J. Miles Hanisee, was appointed in 2011 and is currently the second most senior judge on the court.

New judges were appointed and had to be brought up to speed. “This is not a job that you just seamlessly jump into,” Hanisee said.

In the meantime, undecided cases were piling up. From January 2015 to January 2019, the number of cases awaiting a decision ballooned from 135 to 369, according to data provided by the court.

It stands to reason that these two backlogs would increase the amount of time that the court takes to decide cases, from start to finish.

But the state actually doesn’t know how long the process takes — it lacks this most basic data, even though both the New Mexico Supreme Court and the Legislative Finance Committee have sought the information over the past year. According to Barry Massey, public information officer for the Administrative Office of the Courts, the state’s number crunchers haven’t been able to make the calculation for any court, including the Court of Appeals.

In 2018, the state Supreme Court started to notice the delays and appointed then-senior justice Petra Jimenez Maes to keep a close watch on the Court of Appeals, demanding that it decide cases more speedily.

Faced with this mandate, the Court of Appeals made a fateful choice. In the summer of 2019, the court moved some staff attorneys away from calendaring. The court gave them a new assignment: help judges sort through the growing pile of cases already awaiting decisions. In mid-October, most of the staff attorneys were re-assigned to help the judges.

The initial process of classifying cases as easy or hard slowed to a snail’s pace. And Romero’s case was a casualty of the pause.

“We had to focus on priority number one” — expediting the cases awaiting decisions — “knowing that we would have to deal with the problems that that would produce,” Reynolds said.

In one sense, the pause was successful — the backlog of undecided cases dropped precipitously, from a high of 377 in May 2018 to 249 in December 2019. But cases kept piling up on the front end, because there were barely any attorneys to evaluate them. As of Jan. 27, Reynolds told Searchlight, there were 429 cases that hadn’t even been assigned to staff attorneys for calendaring.

“Oh my God, you are kidding me,” said Maestas, the former chief staff attorney and chief clerk, upon hearing this number. She pointed out that 429 is about half of the total number of cases filed each year. “This just shows how quickly you get behind if you don’t keep up with calendaring.”

The court has a plan to get things under control, said Hanisee, the chief judge. Its budget ticked up in the past two years, which enabled the court to hire more attorneys last summer. Finally, the office is nearly fully staffed. And over the past two months, the staff attorneys returned to calendaring, and the judges and their law clerks began helping them out.

“We plan to spend this year heavily calendaring,” Hanisee said.

The court is asking the state for more money for the upcoming fiscal year so that it doesn’t experience yet another exodus of staff attorneys. It’s requesting $6.8 million, a 3 percent boost, in part so it can increase salaries and keep talented lawyers from leaving for higher paying jobs.

The cost of delays

As of mid-February, Romero was still waiting to hear something — anything — about his appeal. Aletheia Allen, the court’s chief staff attorney, said she expected the case to be calendared “pretty soon.”

The crime took place more than four years ago in San Mateo, a rural community of less than 200 people in the foothills of Mount Taylor. It’s where Romero grew up, exploring the landscape and collecting pottery sherds and arrowheads.

He had never been in trouble with the law before Sept. 30, 2015, according to his father and his public defender, Stephen Taylor. But that day, 16-year-old Romero and a 17-year-old friend hauled away some tree limbs for an older man who lived nearby, according to court records. They were supposed to be paid $20 — or maybe it was $40. In any event, Romero’s friend got into an argument with the man over payment.

The teenagers — with Romero at the wheel — drove to the 17-year-old’s house, where Romero’s friend grabbed a rifle and a shovel. He jumped into the bed of the pickup, and Romero drove back. Romero’s friend got into an altercation with the older man, shooting and killing him while Romero sat in the truck.

When police came to Romero’s home that night, a detective asked the teenager’s father if it was OK to talk to Ruben. The officer never asked the boy if he wanted to answer questions or if he preferred to exercise his right to remain silent, according to court records. Romero did talk that night, and a judge ruled that the youth had effectively waived his Miranda rights — and that the information he provided was admissible in court.

After Romero was convicted of second-degree murder in April 2017, state experts recommended he not be sent to prison and should instead receive therapy and medical treatment in the juvenile system. A judge disagreed, and Romero is now three and a half years into his 10-year sentence at the adult prison in Hobbs.

He had a job for a while emptying trash and cleaning floors. He tried enrolling in a drug treatment class, having struggled with substance abuse as a teenager. But the class was suspended.

With plenty of time on his hands, the appeal he filed last year is definitely on his mind. “Sometimes, at night, I lay awake thinking about it,” Romero said. He tries to focus his thoughts elsewhere. He passes his days watching TV, making phone calls, and working out — he can lift the whole 200-pound stack on the bench-press machine.

If his appeal is successful, it could change his life. But for now, the case is stuck in limbo at the Court of Appeals.

“You’ve got someone who is sitting in jail who maybe shouldn’t be sitting there,” said Maes, the former state Supreme Court justice. Time passes. And if Romero were to get a new trial, that could present its own set of challenges. “Witnesses’ memories fade, evidence gets lost, things happen,” the judge said. “And so justice delayed is justice denied.”